What if you switched this around a bit?

What if you redefined your job as follows: 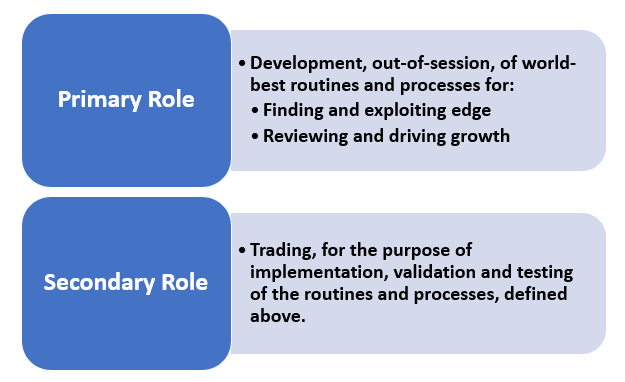 Is it possible that relentless focus and commitment to the processes and routines which guide your decision making and behaviour… might just see improvement in the actual trading results?

This doesn't mean we're no longer discretionary traders. Discretion can be built into processes. But how we come about our trade decisions, is standardised and made as consistent as possible.

The following post was shared recently on social media: 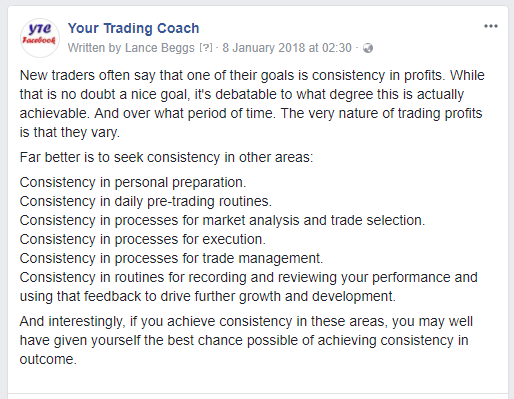 Essentially, we're expanding upon this idea.

For each of the areas listed in that post, we aim to:

It's said, "That which is measured, improves".

But ONLY if that which is measured is applied consistently.

And consistency will only occur if the process is clearly defined.

So maybe consider a little shift in how you define your role as a trader.

Primary role: Development, out-of-session, of world-best routines and processes for (a) finding and exploiting edge, and (b) reviewing and driving growth.

Secondary role: Trading, for the purpose of implementation, validation and testing of the routines and processes, defined above.

WHAT MATTERS… IS WHAT I DO RIGHT NOW!

I am scheduling time during my Christmas and New Year break for three major areas of focus:

I don't yet know the challenges that I'll face in the new year, but I know that I will be ready.

As the opening bell rings on day one, I will be primed for peak performance.

I don't yet know the market conditions that I'll face in the new year, but I know that I will be ready.

And I will have learnt from the lessons of the past.

My performance and process reviews will have identified both successes and failures.

That which I did poorly… I'll know exactly how to improve.

And that which I did well… I'll know exactly how to do better.

I don't yet know the price sequences that I'll face in the new year, but I know that I will be ready.

All set for quality decision making and process-driven focus, no matter what the markets throw at me.

When the new year comes… I'll be ready.

One of the essential breakthroughs we need to make in our journey involves learning to think in probabilities.

It's something that all traders say they understand. But, for most new traders, their behaviour and decision-making shows that it has not been accepted.

This came to mind when I received the following email question:

I’ve circled the “Spike Low”. You can see from the Volume that it spiked as well…. my understanding is that this is a “test” for higher prices. When I’ve observed this very thing (over several years) Price Action “always” moves HIGHER… Today, it Moved LOWER and wanted to educate myself on WHY…

Else, maybe I have the whole thing wrong…

If you can comment and/or direct me to something on your site, that would be great. 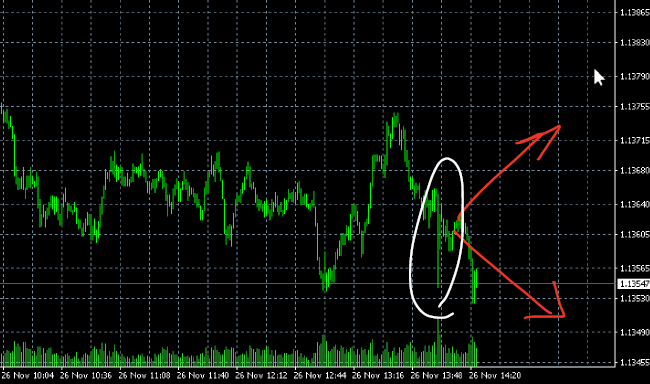 Here's the chart using my usual display format. I've added a higher timeframe support level and positioned the spike at the right hand side. 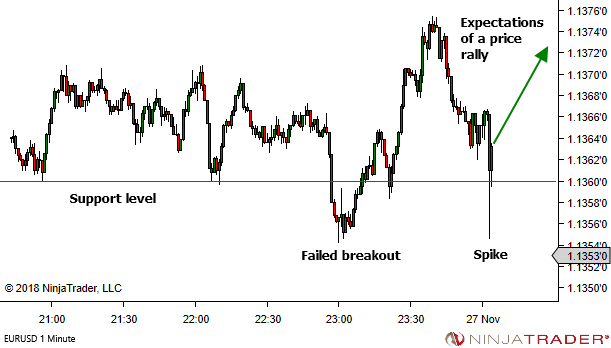 And zooming in to the spike itself… 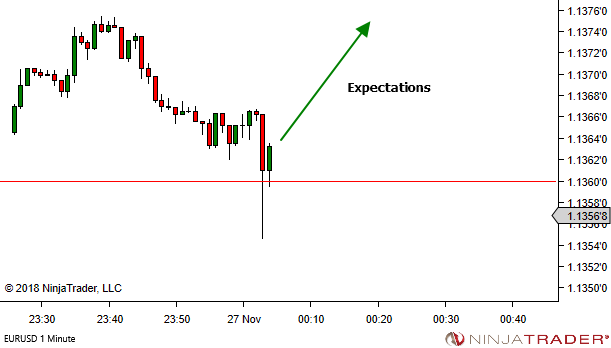 The question again – "When I’ve observed this very thing (over several years) Price Action “always” moves HIGHER… Today, it Moved LOWER and wanted to educate myself on WHY…"

My big problem is with the word "always". Yes, it's in quotes. But it still concerns me.

Here's an excerpt from my reply (noting that at this stage I had no idea of the market or timeframe and was replying based upon the original black-background chart image above).

I can't really answer as to why this move went lower, being unsure of which market and timeframe and whether this price move coincided with any news event (planned or unplanned).

Typically we can't ever know with complete certainty the reasons for any price movement. Price moves where it does based upon the orders that hit the market. Why did it go lower? Because the net effect of all the orders was bearish. Any discussion as to why trade decisions were net bearish, is simply speculation.

The error in your thought process is when you use the word "always" in this sentence – "When I've observed this very thing (over several years) Price Action "always" moves HIGHER."

Does it really always move higher? Or were there actually some occurrences where it moved lower?

We're dealing with probabilities, not certainties. Nothing "always" happens.

Even if this was a 99% probability of moving higher (which it's not because nothing is that close to certain) then there would still be 1 out of 100 cases where it moves lower. This example was that 1 occurrence.

Let's say the pattern has actually 55% probability of moving higher, which might be more realistic. This example then simply sits on the 45% side.

So it's nothing unusual. And nothing that needs understanding "why".

What is important is firstly that you shift your thinking away from certainties to probabilities. And secondly, that if you're trading something like this and take a position LONG in expectation of movement higher, that you recognise as quickly as possible that this occurrence is falling on the losing side of the probabilities, and you adapt quickly and get out.

"Why" is not important. Recognising and adapting is important.

So let's finish up with two additional important points:

1. Knowing the market, date and time, I was then able to confirm that the price spike occurred just two minutes after 09:00 US Eastern Time (two minutes after midnight my time). Two minutes prior to that spike there was a scheduled speech by the ECB President. Given the high-impact potential for such an event (especially given the current Brexit negotiations) it's reasonable to expect that such an event could completely shift the sentiment in the market, rendering any prior analysis and levels as irrelevant. Just something to consider!

You have to be aware of scheduled news events. You can find the economic calendar I currently use on my Resources Page – http://yourtradingcoach.com/resources/

2. For those interested, I actually have no problems with someone entering LONG from that spike. The following are my thoughts regarding the price movement following the spike, looking purely from a price action perspective. 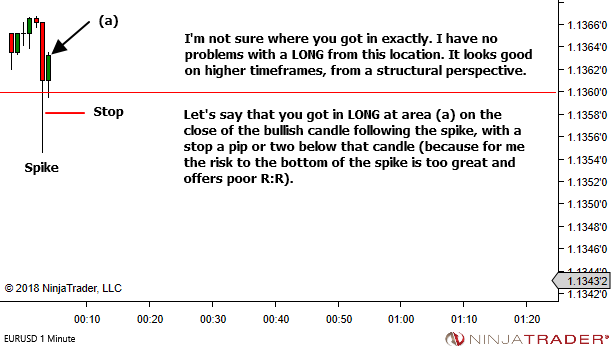 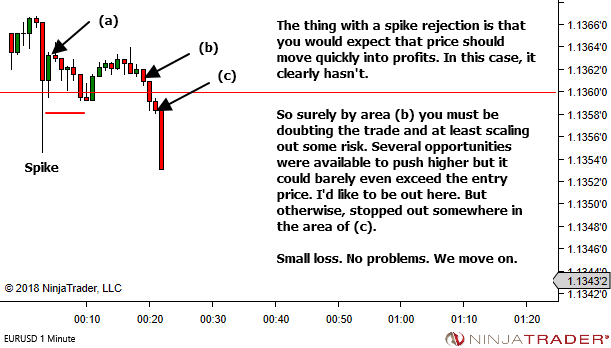 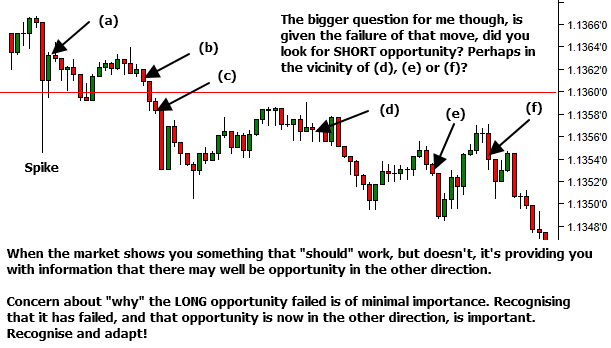 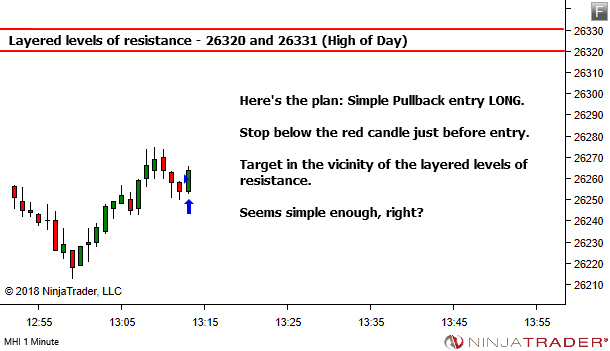 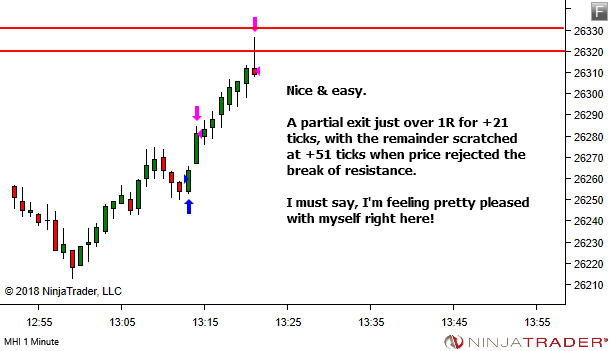 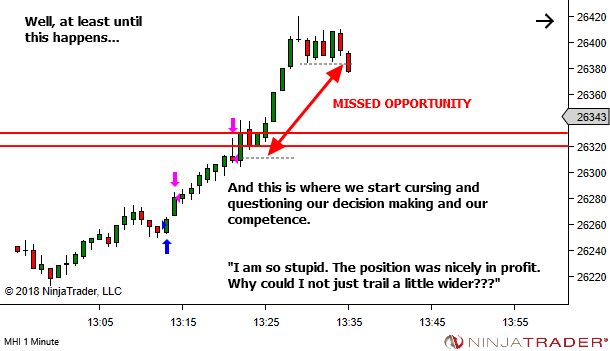 The end result is that I still have a profit. And yet I feel crap. And my mind starts beating me up for not doing better.

All part of being human, I guess.

But not ideal if you wish to be an effective trader.

There is very little to be gained by carrying negativity into the rest of the trading session.

So here's what I do.

FIND A POSITIVE. ANY POSITIVE.

Break the cycle of negativity as soon as you can. Actively, consciously, seek out and focus on something positive.

Here's one I use in situations like the above trade example, where I've taken some good profits but left a whole lot more on the table.

Does the trade I just took completely cover that multiple-trade loss and still provide profits? If so, that's awesome. Great trade. Move on. 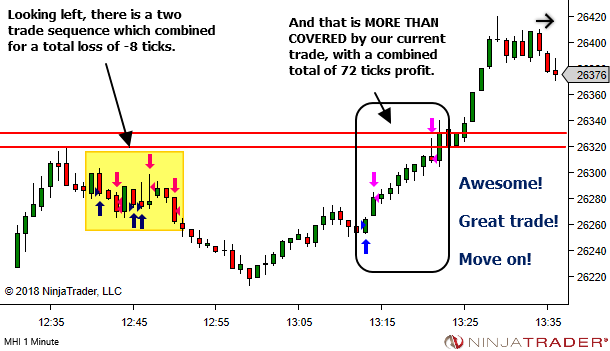 If there isn't an earlier losing sequence, then find something else positive. Anything.

Even if it's just something basic like, "There was a time in the past when I wouldn't have caught that at all. I did today. Awesome! Great Trade! Move on!"

Whenever you find yourself with some negativity… break the pattern!

Find a positive. Any positive.

There are more trades coming and they need your full attention, with a positive and focused mindset.