Last week we discussed my thoughts on trading a small account with one contract.

See here if you missed the article – http://yourtradingcoach.com/trading-business/trading-a-small-account-with-one-contract-part-one/

We finished up by stating the following:

However, having said all that, there are other options.

1. Your chosen trade management style does not need to be a “one or the other” decision.

You don’t need to choose just the close target or the further target and stick with that forever. You may decide to use both at varying times.

You might decide to target the first potential opposing orderflow (the closer target) as the default option, switching to the further target whenever the market context suggests the potential for runner.

When does market action suggest a potential runner? Your market structure journal will help you find these situations. But for starters let’s consider the following:

Let’s “borrow” some YTC Facebook posts showing examples where a wider target may be the wiser option. (The text on the images will not relate to the issue of trading a small account with one contract; look to the price action and market structure to identify the multiple-R potential. And if you don’t follow YTC Facebook, consider liking the page if you want to get new images like this every couple of days!)

In this first example we see a long-term volatility contraction. As price approaches the apex, any trade opportunity within the contraction could be held for it’s potential to break the structure and provide a larger directional expansion. If missed though, further opportunity is available on the first pullback after the break of the structure (at point C). 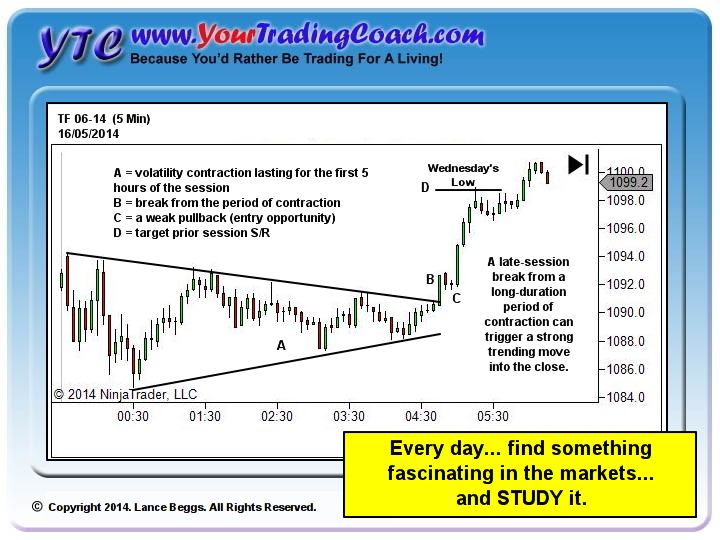 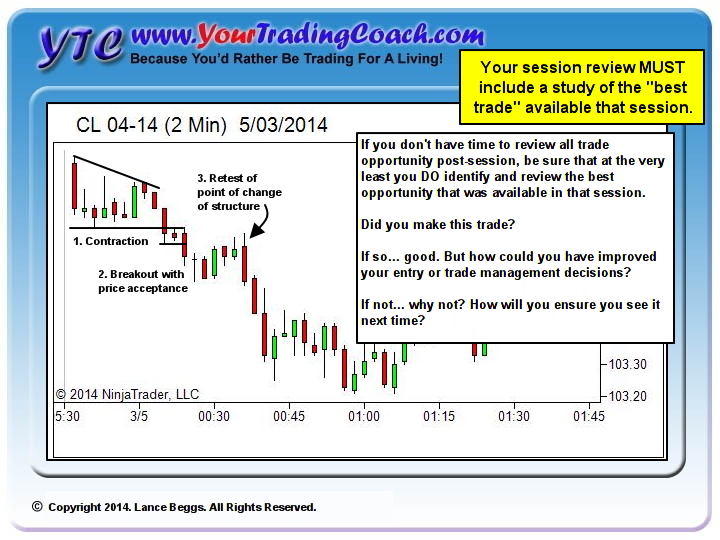 And in the following image we have a ledge pushing against an area of a short-term resistance (also demonstrating volatility contraction becoming expansion). 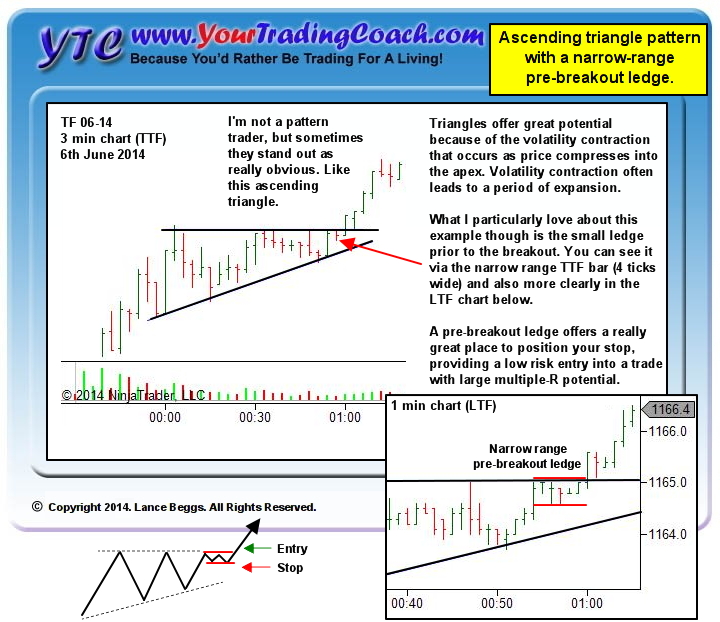 Another scenario that can provide multiple-R opportunity:

Again, let’s “borrow” from YTC Facebook. In this example the E-mini Russell market has provided a beautiful BOF setup at the current day’s low.

Assuming your default option was to use the closer higher-probability targets, this setup is absolutely screaming out for you to switch to a much wider target. Don’t short-change yourself at structural levels. 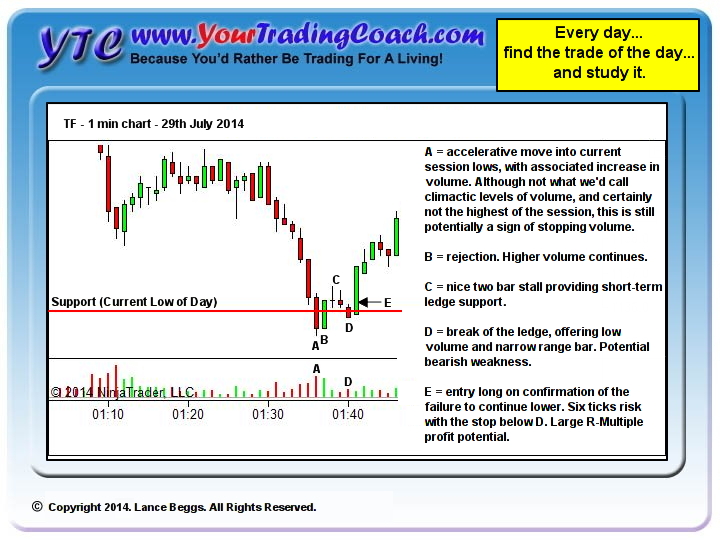 You may be able to think of other criteria for your own trading plan.

The key point though is that trade management does not need to be a ONE or the OTHER situation. You can adjust to use a different style of target. Whenever the market context suggests a higher likelihood of a runner, consider a wider target.

2. There are also situations during a session which don’t necessarily offer multiple-R potential from a structural point of view, but may still warrant a change of approach to a wider target. Second chance entries are one such case… often providing a “better” entry than an original trade entry trigger.

So you might decide to target the first potential opposing orderflow (the closer target), switching to a further target whenever offered a second chance entry.

You might also decide to adopt additional money management requirements before switching trade management styles for these “lower probability runners”, such as being profitable for the current session and ahead of your planned rate of growth for the month.

Let’s say for the sake of an example that your target rate of account growth is 5 ticks per day and you’re currently trading ahead of that target rate. Looking back at the chart from last week’s article, let’s see how you could have switched management styles. 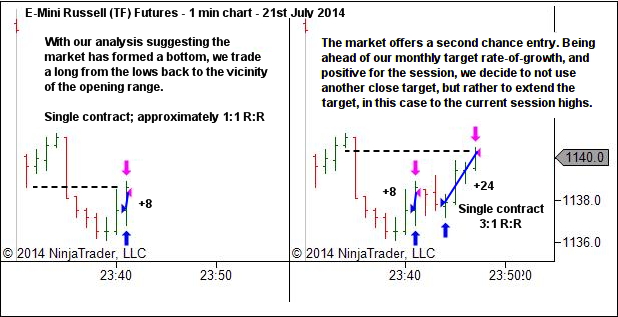 Of course, there are no guarantees and from time to time the second entry may stop out. Worst case though, if it were a full stop rather than a breakeven stop, you simply would have erased the profits from the “first trade”. A small risk… worth taking because of the potential reward.

3. And of course… while we’re considering wider targets… let’s not forget the option of using a trailing stop on our “potential runner”. 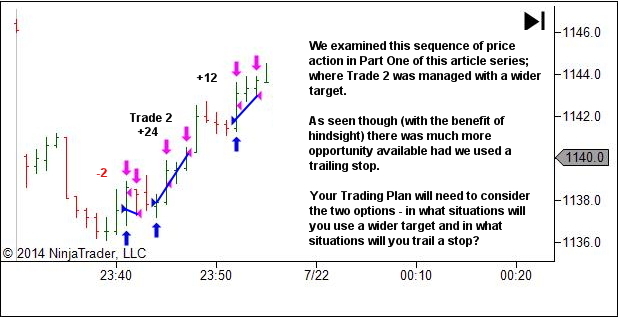 4. A further option while holding a runner is to manage it via a very active scratch and re-enter plan. This is not for the new trader, so I doubt it will be relevant to those with small accounts. But I include it here as an option for you to consider – maybe it will help shape some part of your future trade management plan even if it’s not relevant now.

Essentially we’re trying to exit as close as possible to levels of short-term S/R and then re-enter the same position again on a break, repeating as necessary and for as long as the trending move continues.

Trade management is after all just a constant reassessment and management of reward vs risk.

Again… not for beginners!

Which is right for you, for your trading style and for your risk tolerance?

That’s what your testing and session review processes should determine.

It’s important to remember though, our goal at all times when trading a small account with one contract is two-fold:

Every trade management decision you make, whether at the Trading Plan level or at the hard right edge of the live trading session, should be directed towards achievement of these aims.

Close target? Wider targets? A mix of the two?

There is no right or wrong method of trade management. Just what works best for you and your personality, in achievement of these goals.

Test, review and improve. It’s the only way!

Let’s wrap up with some Q&A that came following the first article.

Active management meaning that you allow yourself the right to move stops (closer only, never wider) and targets and even scratch the trade prior to it hitting the original stop or target.

Passive management meaning that once a trade is entered you essentially sit on your hands and touch nothing, allowing the trade to hit either the stop or target as determined by both fate and orderflow.

I’m of course biased in that I’ve always been an advocate of an active management style.

In this situation where we are forced to trade one contract only, I believe it’s even more important to adopt an active management style.

Your goals are twofold:

You enter a trade based upon an assessment of reward vs risk and the potential for orderflow to drive price to your target. It makes NO SENSE to hold a trade when new information (post-entry) suggests that either your analysis was wrong or that the supply/demand dynamic has changed.

Let’s say you enter with a 6 tick stop and a 10 tick target, for example, and price gets to 8 ticks and stalls… and stalls… and stalls. Three attempts to push through to the +10 target have all failed. Scratch the trade and take the +8 profits. Don’t let it reverse and move all the way back to the -6 tick stop. Don’t risk 14 ticks to make another 2. It makes no sense at all from a reward:risk perspective, when new information has come to light to suggest opposing orderflow at +8.

If preservation of capital is a goal then it makes no sense to let a profit turn into a loss, when new information suggests that the trade has lost it’s edge.

If building your account is a goal then it makes no sense to let a profit turn into a loss, when new information suggests that the trade has lost it’s edge.

Of course, as always, this is opinion only. Track your stats. Compare your active management results with those that would have been achieved with a passive set and forget approach. You may find that you do better the other way.

I’m operating from the assumption that if you have a small account, it’s because that IS ALL YOU CAN AFFORD.

If it takes longer to achieve an account size that allows for multiple part positions, so be it.

At least when you get there you’ll know that you ARE a trader. Then… add that second contract and continue building your account.

But never increase risk beyond 2%.

Just my opinion of course!

3. Another email correctly informed me that the prior email was written as if in response to someone who had already completed their sim training and proven profitability on the sim with a multiple-part management scale-out management style. They asked how someone should conduct their sim “trade management” if they were a complete novice, anticipating the fact that they will only have a small account when they do eventually go live.

Correct. The focus was on those who had completed their sim training.

If you’re just starting out… again, as with so much of this business, there is no right or wrong answer. Sim trade and learn with a single part management approach. Or with a multiple part approach. The best option is whatever option you’re comfortable with.

That being said, if in doubt it’s always a good idea to simplify. Start with a single part position only. Perhaps the more “higher probability” approach used for my first exits. Learn to get profitable on this part only. Add the second part later.

4. You never explained how and where to set the targets?

See here for a description of how I set targets.  (And a whole lot more!)