I trade using YTC PAT 3min trading chart & 1min for triggers. I keep on coming across this 1min trigger over and over again (see charts below). I've never heard anyone discussing this type of trigger and wanted to get your thoughts on it's validity or not?

When the overall structure is in a setup area and you're looking for a trigger using the lower time frame is when I would use this trigger. The trigger is simply when the 1st bar is inside the prior bar and the prior bar is inside it's prior bar, that's when we would trigger above or below the 3rd bar (The charts below should clarify). On a micro time frame (much smaller than the 1min chart) this trigger would probably look like a tight range that were breaking out of.

Like I said, I see this often on a daily basis and it struck my curiosity……Thank you in advance for your input. 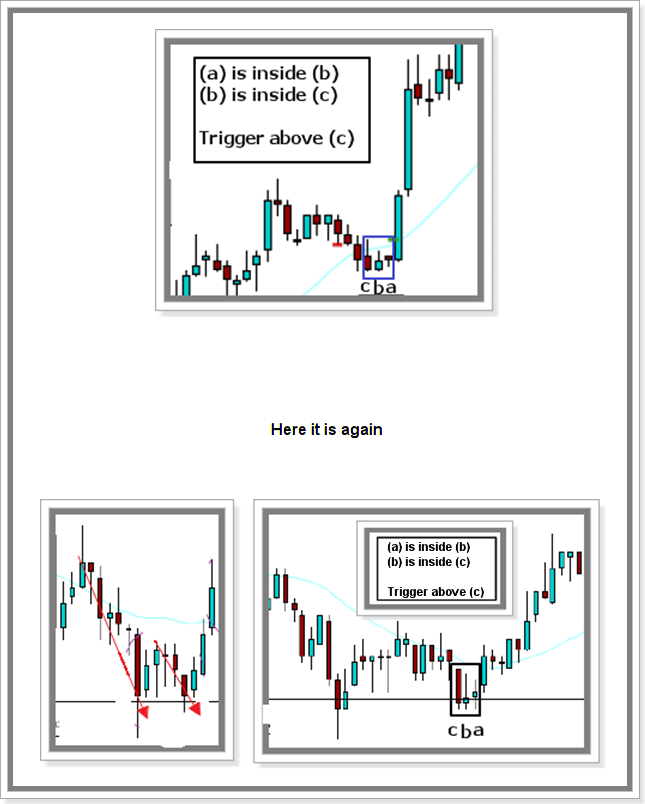 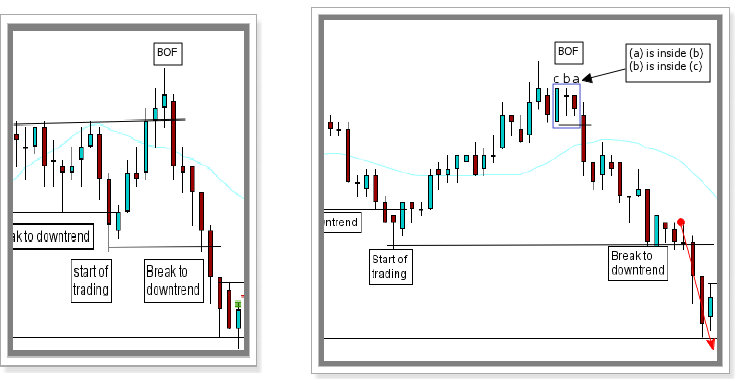 Nice work. That's one of the keys to growth & development; exploring the charts, finding something new, testing and evaluating.

This is not a new concept though, so you get no naming rights! 🙂

But it is a great trigger entry pattern.

It's an extension of the inside bar concept; typically referred to as a Double Inside Bar setup. The only other name I know it as is the 'ii' setup, used by Al Brooks. There could be other names.

The double inside bar is the same concept as the blog post, just on a different time scale. As you said, looking at the lower timeframes inside your double-inside-daily-bars you may well find a contracting triangle pattern exactly like occurred in this blog.

Context is important though, as always. For example if this occurs in the middle of an extended period of sideways ranging action, with lots of prior occurrences of inside bars; it probably means nothing.

Breaks from contraction can often be quite explosive. Everyone always talks about how price is king; but time is also of incredible importance in the markets. Sometimes time, not price, will provide the greater influence in a traders decisions to act; and in the urgency with which they act.

Consider your double inside bar on a daily timeframe. Traders typically have very little patience. Imagine you've just entered a trade. You have an expectation of price movement and a belief that you will win. Then the whole next day price doesn't move at all, instead consolidating inside the prior day's range. "No problems… it'll move the next day!". And then the next day it tightens the contraction further. "WTF???" The stress builds, and traders will tighten stops up closer to the price bar highs and lows.

It's human nature. You'll feel it any time you're in a trade and it's just stalling rather than moving in your expected direction. Everyone's tolerance will differ, but we all have a breaking point at which we can't handle the pressure any more.

And so when the stops eventually trigger it can lead to a nice explosive move.

One caution though… they're also capable of producing a nice breakout trap. Often these traps can lead to a nice move in the opposite direction, so if context is right consider a stop and reverse.