I thought it would be good to expand upon some of the ideas discussed on YTC social media last weekend. 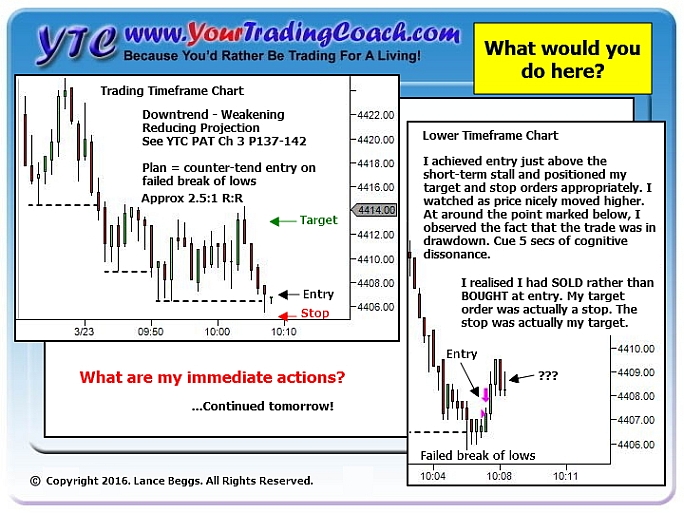 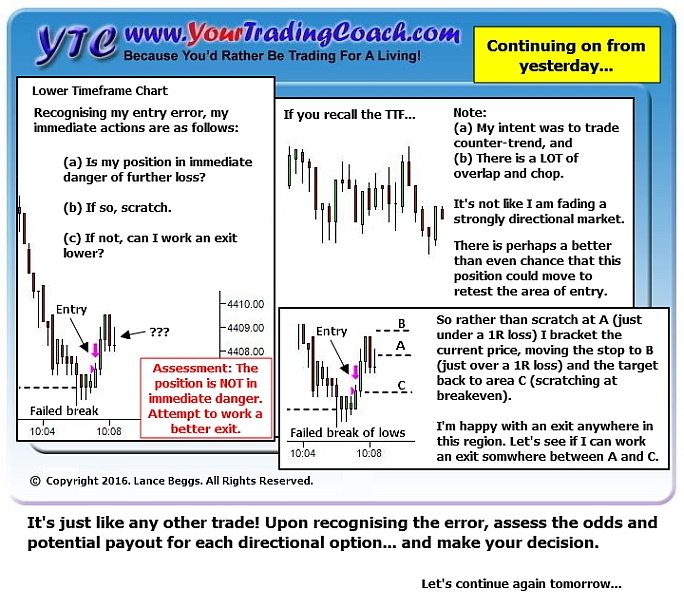 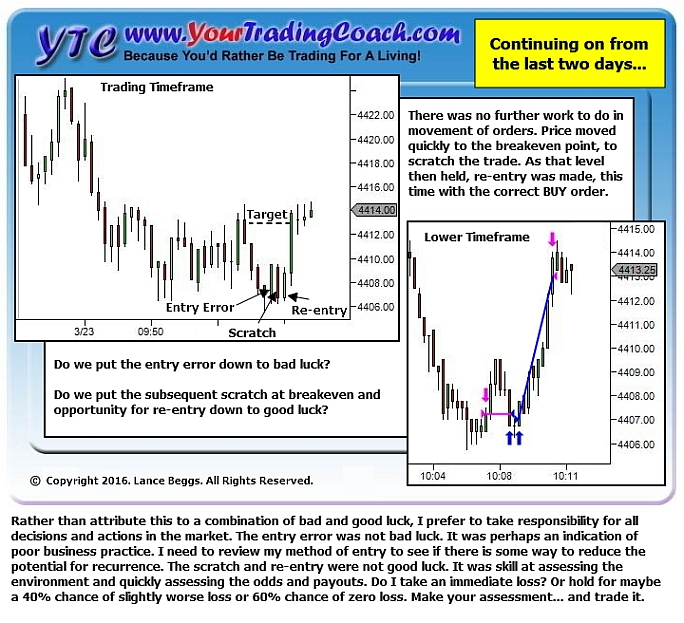 There are two main points that I'd like to examine in a little more detail.

So let's say you've traded the sequence above, and just recognised the entry error. What are your actions?

The obvious advice is to scratch immediately. It's what most educators will suggest. And often it is good advice. Immediately take responsibility for the error and take your loss.

I won't ever have a problem with someone who does this.

Especially in the following cases:

For these occurrences, immediately scratching is likely the best option. Take the loss. And review the whole session at a later time (or even the next day) when it can be looked at with an objective and clear mind.

But in all other cases, I think we can improve on this.

Here's the thing… there is often no need to panic.

You will often have sufficient time to make a quick assessment and determine whether or not the position is an immediate threat… or not.

That is… does the current situation have a high probability of rapidly getting worse? Or is it maybe not so bad? Can you maybe even recover the situation?

Let's change the context a little. We'll start with some very simple examples.

Is there reason to panic?

Yes, we're lacking in wider context. And in "the reason" for wanting to go long.

But whatever that reason is, it's clear our intent was to fight a strong downtrend.

And the fact is that we don't get 100% winners. A good percentage of our trades are wrong.

So let's hold for a second and watch the immediate, short-term movement. Despite the fact that we intended to fade the market, circumstances have instead led to us being aligned with the momentum. Perhaps this will allow us to work a breakeven exit. Or even achieve a profit.

Another example, looking at the opposite extreme:

Is there an immediate threat?

You've found yourself fading some strong bullish momentum. Your position is very likely to get run over, making the current poor situation even worse.

It's going to feel a WHOLE LOT MORE uncomfortable than the downtrend example.

And the decision to scratch will likely come VERY quickly.

In both examples above, how long did it take you to assess the situation as to whether or not it provides an immediate threat?

You have the skill to recognise an immediate threat!

And you should have sufficient time.If you're trading such that a second or two of extra loss can cause critical damage to your account, then you're trading too large a size.

If you find yourself with an order entry error, quickly examine the Trading Timeframe chart. Are you positioned against strong momentum? Does it immediately invoke feelings of fear or discomfort? If so, scratch the position.

Not all examples are as obvious as the two provided above. They're extreme cases with the underlying momentum moving strongly in one direction. Let's look at the Trading Timeframe chart from the trade sequence which led to the earlier social media posts, intra-candle, at around the time of discovering the error. 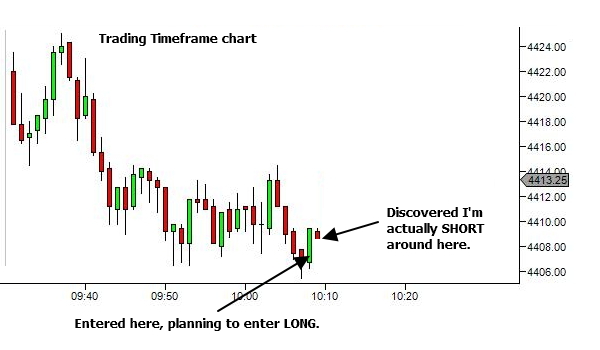 Does this immediately invoke feelings of fear or discomfort?

Apart from frustration and anger at the entry error… not really.

While the downtrend is not as strong as in the earlier example, my trade idea was still fading the overall momentum of the market. And I now inadvertently find myself aligned with that momentum.

In the immediate short-term, there's no need to panic.

So I didn't scratch. I reassessed the situation and attempted to work a better exit.

Let's see the lower timeframe at the time of recognition of the error. 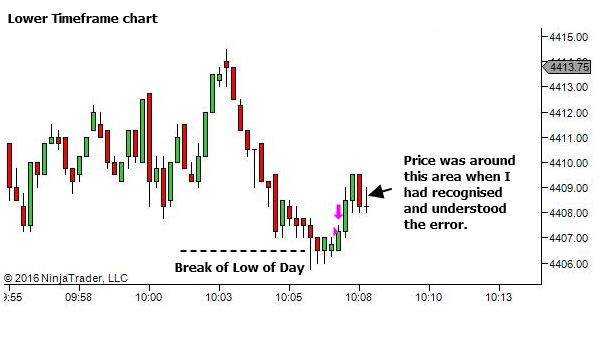 My thought process at this stage is: 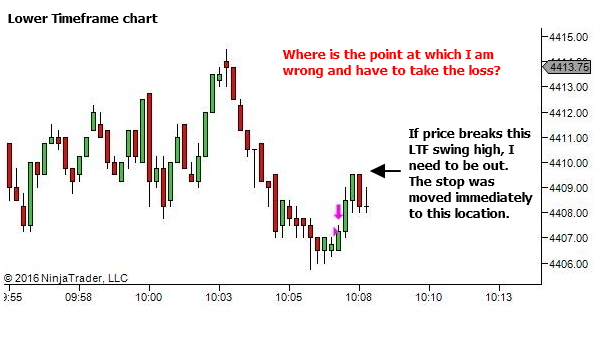 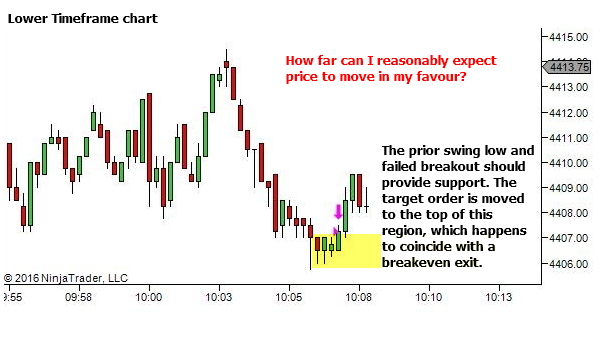 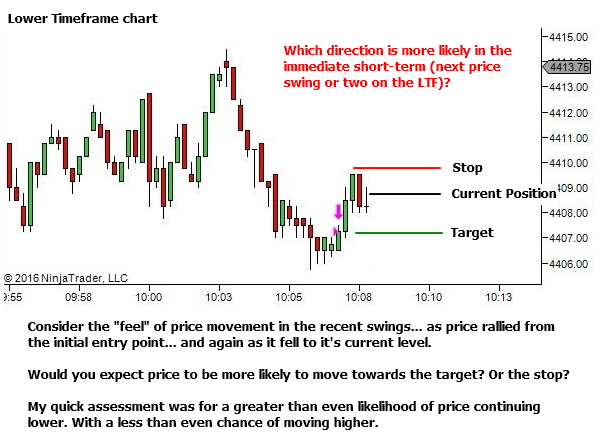 You might note that the original social media posts mentioned a 60% chance of movement lower versus 40% chance of movement higher. It's not actually this scientific. It's just a quick assessment of "which feels more likely" given the ease with which price moved in recent swings. I assign a probability to give an approximate degree of likelihood. 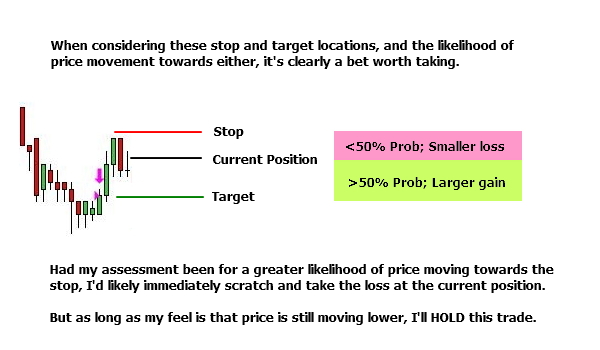 Now that I've decided to work the exit, it does not mean I passively hold until either the new stop or target are hit. The odds are constantly reassessed and the position is actively managed. As soon as I suspect the odds of favourable movement are less than even, I'll either scratch or very aggressively tighten the stop.

I'm WORKING an exit as favourable as possible, not sitting back and hoping for a bit of luck. 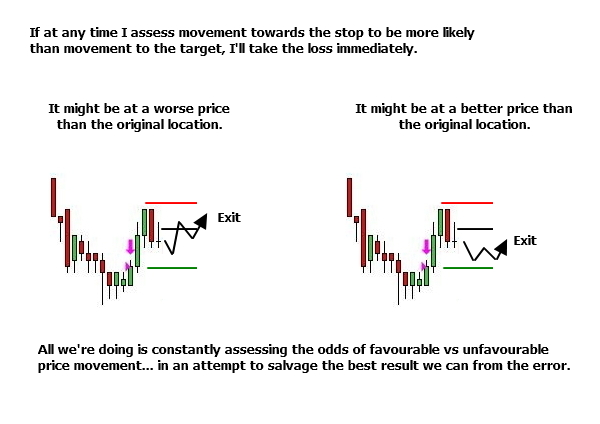 You've just discovered an order entry error that has you positioned in the wrong direction.

Is this cause for panic and immediate exit?

How long will it take you to assess whether or not there is an actual imminent threat to your position?

Perhaps only a second or two.

Pause… assess the situation.. and trade what fate has provided you with.

Just like the decision to enter any trade… managing an error is just a matter of assessment of the odds and potential payout.

Errors happen from time to time.