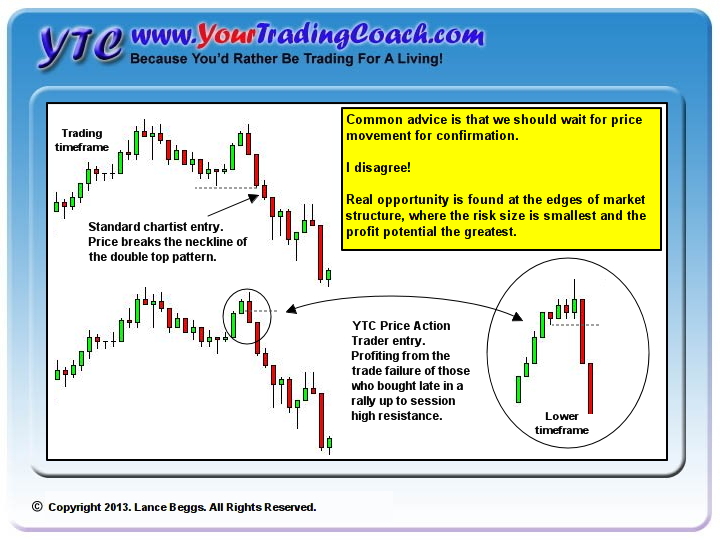 Today I'd like to discuss the statement within the yellow box, "Real opportunity is found at the edges of market structure, where the risk is smallest and the profit potential the greatest".

I recall back in the early days of my own trading, I had the opportunity to look at a chart of a professional trader, which contained annotations showing his entry and exit points. Talk about cognitive dissonance! That was truly an uncomfortable experience as the reality of what I was seeing did not in any way match what I believed to be true about trading.

I just didn't get it at the time.

In fact, I convinced myself that the chart was fake. There was (in my opinion at the time) ABSOLUTELY NO WAY that entries could be taken at the places marked on the chart. They were too close to the actual turning points. I'd studied Technical Analysis quite extensively. I knew that there were no TA methods to identify a turn point so accurately. You HAVE TO wait for confirmation of the move. There was no way on earth this guy actually took these trades.

Of course… I was wrong.

My own knowledge and experience were not sufficiently developed at the time to understand what I was seeing.

The reality, for swing traders, is that opportunity is found at the edges of market structure where the risk is smallest and the profit potential the greatest.

Most traders seek confirmation… by which they mean that "they need to see price having already moved in their expected direction". They enter simply in the hope that this movement will continue.

This is a psychological crutch. It offers them nothing from a reward:risk perspective. It usually offers them very little in terms of greater win percentage. But it eases their uncomfortable feelings. They see that others have already entered, so they feel comfortable following the crowd.

But who do you think has caused the initial movement? Who do they think created the confirmation?

It can't be those who only enter after confirmation. It has to be those who have a deeper
understanding of how price actually works.

It's the professionals… who are able to build a position in a good structural reward:risk location. The same professionals who are then scaling out of their position at retail trader locations.

Trade entry is based upon a deeper level of understanding of the nature of price movement and orderflow mechanics.

Entry does not require price movement in our desired direction. Entry can also be taken when we see that price cannot move in the opposite direction. See here and here and here. 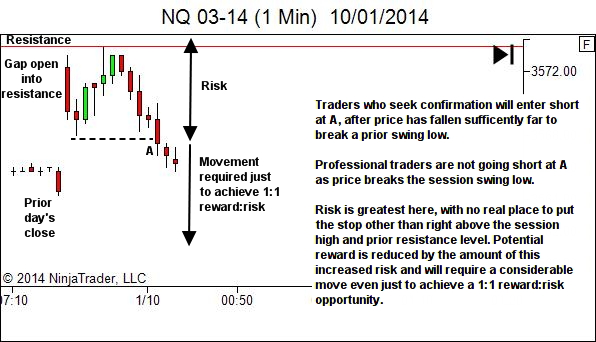 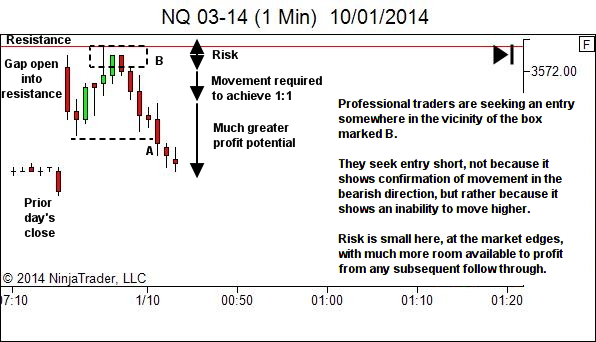 Note that it's not necessarily the dollar risk which is changed. Those entering late, after confirmation at point A, could well reduce position size such that the dollar risk is no different to that of a trader entering at B. What is different is the risk compared with potential available reward.

Price movement does not always continue forever in your trade direction. The more of a price move you allocate for "risk", the less is available for "potential reward".

Often people will say, "I don't have to get in at the bottom and out at the top. I'm happy to just take a third of the move out of the middle!"

But you're assuming here that you know where every price swing will end.

Price swings only have so much profit potential in them. The more "confirmation" you require before entering, the greater the potential risk and the less the potential profit.

Professionals trade closer to the extremes, where there is less risk and greater profit potential. 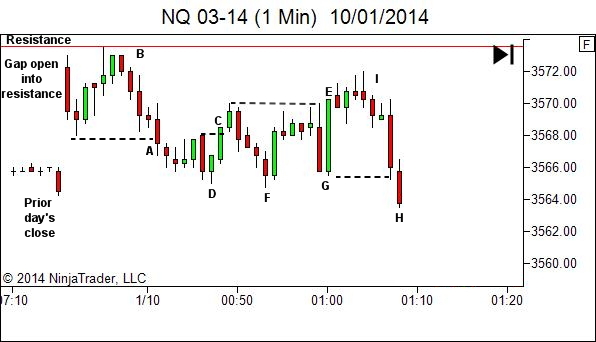 Who bought at C, as price confirmed a break to the swing high/low structure? It was not someone who is skilled enough to recognise a low risk opportunity with higher profit potential. They bought earlier in the vicinity of D, as price proved it was unable to fall below the stall at A, into the area of the prior day's close.

Who bought at E, as price broke out of the sideways ranging congestion to commence a new move higher? Again, it was not the professionals. They entered in the vicinity of F, as before, when price failed to move down having broken to new session lows. They also added or re-entered at G, again as price proved an inability to move lower.

Is it easier to get in after confirmation? After price has already moved a certain distance in your required direction?

The fact is that it's much harder to enter at the edges.

It's not taught in standard technical analysis. (Maybe these educators don't know how! Or maybe they want you taking the opposite side of their trades!)

Successful trading demands a high level of knowledge, skill and attitude. It requires a different understanding of the trading game and the nature of price action.

Successful trading requires you to have the courage to not go along with the crowd, but instead to actively compete against other market participants!

In an industry where the majority of traders lose, it will always pay to question that which the majority see as common sense.