I came across a great quote a week ago, which led to to part one of this short article series: http://yourtradingcoach.com/trading-process-and-strategy/self-deception-according-to-kierkegaard-part-1/

In part one we looked at an example of the first – believing what isn’t so.

In this article… refusing to believe what is so.

There are just so many ways to demonstrate this. I was tempted to discuss the danger of continually fading a trend (something that catches me from time to time). But I’ve done that before.

For this example, we will look to something that doesn’t afflict me, but is incredibly important and does cause many people great concern. It’s also a topic I haven’t really discussed in much detail.

That is, failure to honor stops.

We can talk through any number of examples. They’re all over the charts. But let’s just go to the first that I can see as I write this evening.

It’s Monday, 21st March 2011. The Euro has broken a previous swing low with a number of very bearish looking candles. Let’s just assume for the sake of the article that you’ve entered short on breakout, via a stop entry order at 1.4128.

The chart is shown below intra-candle, as price pushes to new lows. The entry candle is shown as A. The stop will be placed above the previous swing high at B (that’s part of the reason I personally hate breakouts… how far away is that stop!!!) 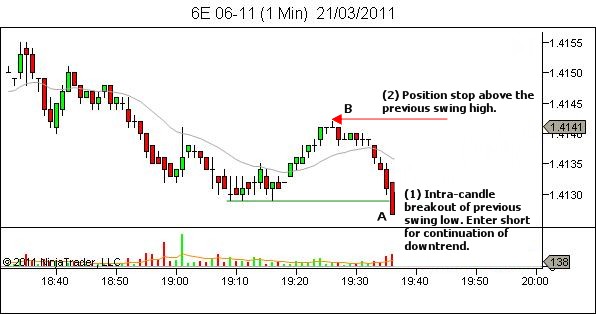 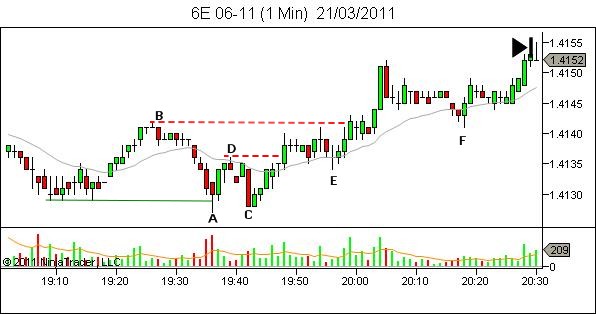 D’oh! Our entry candle A closed back above the breakout level.

Active trade managers will be aiming to minimise risk as much as possible, scratching the trade well before the stop if they perceive that the edge has gone, or is in doubt. These traders had three clear signals for exit.

Passive trade managers treat this game differently, preferring to set the stop and target and then walk away. While I disagree with this concept, provided your numbers work out and your trading gives you an edge, then who am I to argue. In that case, fine. Ignore all evidence otherwise and wait for your stop to hit as price exceeds the swing high from B. I would ask you passive trade managers though to consider one thing… assume you hadn’t entered at A, but did enter short at C. Where would your stop go then? Probably above D? If that’s the case, is there any reason that a stop for entry at A should not be moved from B to D after the second attempt at the breakout? Maybe you could consider a semi-passive strategy, moving the stop ONLY if a subsequent entry would actually offer a closer stop. Ok… I’m off topic, but it’s something to consider.

In both cases (active and passive exit), the trade has been aborted at the point at which they believe their edge is gone.

Exiting allows reassessment of the bias with a clear and objective mind. Something that’s more difficult to do with exposure to the market.

The active trader is out at the very latest as price breaks above the swing high D, and able to clearly reassess. Analysis with an objective mind shows that there was actually very little in the way of bearish strength. Candle A rejected lower prices on high volume, indicating buying at and below the point of breakout. While C looks bearish when considering the low-close bearish nature of the candle, it’s on lower volume than the first push, was unable to break to new lows and was immediately rejected on the next candle. The break above D stalls, but is not able to fall. Reassessment with a clear mind, free of influence by open-position risk or confirmation bias, is able to perceive a higher likelihood of continuation higher, and prepare for entry long in the vicinity of either E or F (or maybe they’d prefer the break above B given that we’ve already established they’re breakout traders).

The passive trader is out as price breaks swing high B, and similarly able to reassess future bias and trade opportunity, maybe either entering immediately long on break above B (reversing the previous short), or entering long on the F pullback.

Price action and trading lesson over… let’s now consider the implications of not exiting at the pre-planned stop.

Failing to honor your stop in either case, means continued exposure to drawdown risk, increased potential for triggering of subconscious fear-induced patterns of behavior, clouded decision making, and quite likely zero potential for entry long at E or F.

Over the next few hours price moved about 50 pips higher. If you had the stomach to hold on this long, you were rewarded with a breakeven exit as price then crashed back down those 50 or so pips in less than 10 minutes.

Thankfully in this example it may not have destroyed your account. Most won’t. But one day… it will.

Why do people allow trades run past their stop?

Under no circumstances is it a subconscious decision to hurt themselves. Rather it’s a subconscious need to protect themselves from some deeper hurt that comes with trade loss. To the objective mind, this trade sequence offered numerous price action clues that there was little strength to the downside. However to the fearful short, the market offers endless signs that convince them that if they just hold a bit longer they’ll be rewarded as price moves back in their favor. Blinded by the fact that they desperately want this short to work, they seek out ANY information which supports their premise and keeps them in the trade (candle C for example, or the stall after break above D, or the dark cloud cover after the break through swing high B).

Exit and you take a guaranteed loss. Hold the trade just a little longer… and just maybe it’ll come back… after all, “look at all the clues the market is offering to support your short premise.”

What is the subconscious fear that we seek to avoid? There are as many variations of this fear as there are people on the planet – we all suffer through pain from some long forgotten trauma. This article is not about that subject. We can do that another time, or I can refer you to people who explain it much better than I ever will.

But from a “stop loss” perspective, the nature of the subconscious pattern is irrelevant. What is important is the fact that a potential trade loss has been allowed to trigger this pattern.

This is an indication of the following. Either:

If you did have trust in yourself and your strategy then taking a loss on any particular trade should not be of any concern. It’s part of the path to longer term profits.

The fact that you were unable to take that loss indicates trust issues.

If you have trouble taking losses from time to time… consider this… is it possible that you don’t believe in your ability to profit? Why? What can you do to develop trust?

We’ll talk more on trust in the future – a big topic.

For now… this article appears to have morphed from self-delusion to stop losses to psych issues. Ultimately they’re all related, so that’s cool.

Let’s tie it all up though, as it relates to self-delusion.

Whether continually fading a strong trend, stopping out time and time again, or holding a trade well past the original stop location, feeding on the hope offered by the never ending tempting trade patterns that convince you to hold just a bit longer, only to continually have your hopes dashed again and again, the issue is the same. You’re failing to see the signs the market is offering that show the opposite premise. You’re failing to believe what is so.

There are issues you need to work through – trust for one – and this will take time. But in the meantime, awareness of the potential for self-deception is a starting point in minimising its impact.

So, let’s wrap up with a reminder of the key points from the first article…

If you’re suffering a drawdown, is it possible that you’re actually suffering the second of Kierkegaard’s two ways to be fooled, and simply refusing to believe what is so?