As a follow-up to the article on stop running http://yourtradingcoach.com/trading-process-and-strategy/stop-running-and-what-you-can-do-about-it/, I thought I’d show an example of how these occurrences can set up great trade opportunities.

Observe price as it breaches any significant swing H/L or S/R level. Not only will this trigger the breakout trader’s entry orders, but also the stops for many other traders who expected the level to hold. A double dose of order flow!

Let’s look at an example.

Really, any chart which shows a failed break of an S/R level or swing high/low will be fine for demonstrating the concept, especially one showing a text-book-perfect single candle breach & failure, leaving a tail protruding through the stop position. However reality is rarely as nice as patterns in the text books. So instead I’ve simply shown the most recent example from my trading.

The following is the MHI futures 1 min chart from yesterday (Thurs 8 Oct 09). 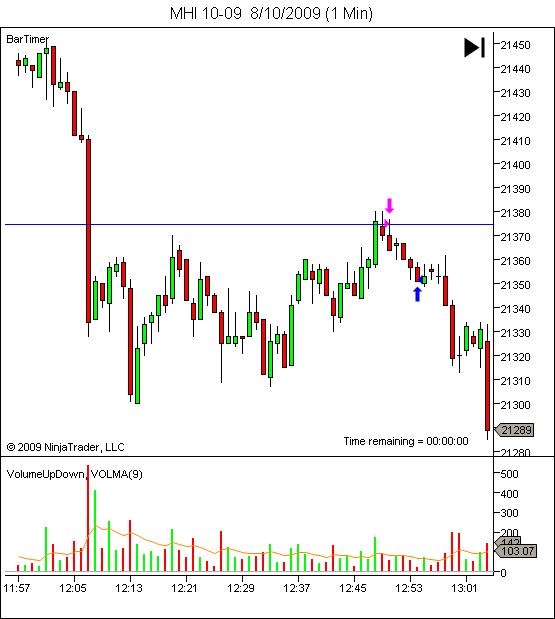 The 12:07 drop, plus subsequent price action, would have led to many traders entering short. Moving averages would have crossed down, momentum traders would have entered short, and pullback traders had three opportunities for entry at 12:12, 12:19 and 12:39. The obvious place to place the stop is in the vicinity of the horizontal line, just above each of the pullbacks. It also happens to be the previous day’s high price – nice!

However the bears haven’t had all the fun. The 21300 level found some demand which brought the bulls into the market.

While there were opportunities available in trading short from the pullbacks and long from the areas of demand in the vicinity of 21300/310, they’re not what this article is about. With the downward bias facing an opposing bullish force, a key significant area to watch (if price gets there) will be the position of the bear’s stops.

In this case, price did get there.

At 12:48, a breakout occurred – price penetrated the 21370 swing high, plus the 21375 previous day’s high (horizontal line). Stops were likely triggered and breakout traders likely entered long, as evidenced by the above average volume (nothing too great in this case, but certainly the greatest volume in the last 20 minutes).

However price only managed to move a further 5 points before stalling. Demand dried up, signaling a likely failure of the breakout and resumption of the downward bias. Feeling this failure I managed an entry at 21375 to trade the move back down.

PS. Totally off topic, but for those who were interested… this entry was about the only good decision I made this whole session. I woke up Thursday feeling very tired after a bad sleep, but decided to trade anyway as I met my fatigue management guidelines (at least the objective rule part – in hindsight I should have skipped the morning session). I missed the earlier opportunities as I was just not in sync with market flow. I saw all the setup areas develop, but just didn’t get in. I was waiting for deeper pullbacks and so limit orders just weren’t getting filled. I just wasn’t feeling the flow. Just over an hour from market open (11:45) and no trades. Not fun!

Then this setup developed and presented a great opportunity.

Unfortunately I didn’t capitalize on that opportunity – while the entry was great, the trade management was less than idea. It was traded all in and all out, with the exit at the point where I first expected demand, just above the 23350 level in the vicinity of where price commenced the push towards the breakout. The fill was at 23352. While 23 points is nice, this should have been a partial exit, with the remainder targeting the lows around 23310/300.

Still, that’s real trading. The battle is with ourselves, not the market. And while it’s important to maximize opportunity when presented to us, it’s also equally as important to minimize damage when we’re not trading well. The positives out of this day were that my less than optimal physical and mental state, my poor market feel and my less than ideal execution did not lead to too much frustration and did not result in stupid trade entries and unnecessary losses. Overall, I’m fairly happy with the result, given my performance. Maybe next time I feel like this, I’ll just go back to bed as soon as the kids are dropped at school???

2 Comments to “Setups Based on Other Trader’s Stop Areas”

Leave a Reply to James Rowe