While my analysis is usually conducted on time based charts, last week’s article discussed the one period of time when I always refer to tick or range based charts (usually monitoring both). If you missed it, you can read it here: http://yourtradingcoach.com/trading-process-and-strategy/tick-or-range-charts-vs-time-based-charts/

I’ve had a couple of requests for another example, with one request also for showing entry/exit points, so here’s one from this week’s market action. This time we’ll look at a with-trend example.

At 12:00pm (midday) GMT on Thursday, 4 Feb 10, we had the release of the MPC Rate Statement and Official Bank Rate. The following example trades the action following this news release. The news release is obvious on the first three charts due to the rapid expansion in volatility. It’s not so obvious on the range chart, so has been marked by a blue vertical line.

A little disclaimer first – trade execution was done through Interactive Brokers, not through Ninja, so the trade execution plots had to be created through a post-session replay. Part 1 is exactly as traded live, entry 1.5840, exit 1.5848. Part 2 orders were entered targeting 1.5860, but as sometimes occurs in one-click-trading the order was somehow inadvertently cancelled immediately after it was placed (I assume I must have somehow clicked on it a second time to cancel). By the time the initial confusion was over, confirming that the order was actually cancelled and I only had a one-part position in place, there was no opportunity to re-enter Part 2. Stuff happens! In the example though, I’ve chosen to show Part 2 anyway – makes me feel a little better and you get to see my original intent.

First, the five minute chart… not much use in getting a fast response following a news release: 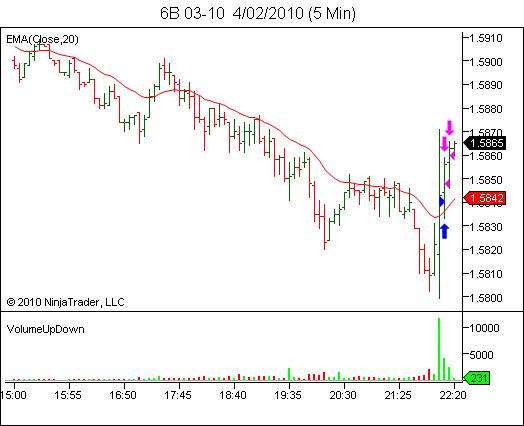 The one minute chart shows my plan – essentially buying the first pullback after the news release. Timing entry on the pullback is always the difficult part. In hindsight on this chart I could have just entered on a breakout of the lowest pullback price bar, but it’s not always that simple. 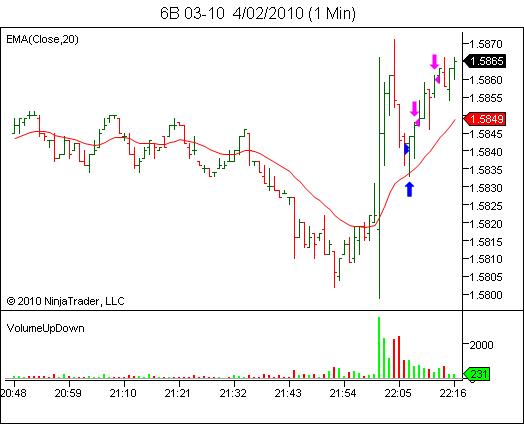 My preference during these volatile post-news periods is to look even deeper into the price action, via a shorter timeframe tick and/or range chart, usually 30 tick and 4-range for GBPUSD.

On the following two charts displaying 30 tick and 4 range, you’ll clearly see the entry point as price moved down on lower momentum to test the initial two post-news swing lows, A and B, breaking below on lower volume and then rejecting lower prices. 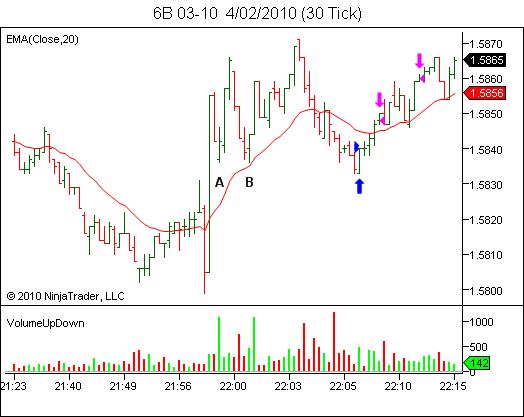 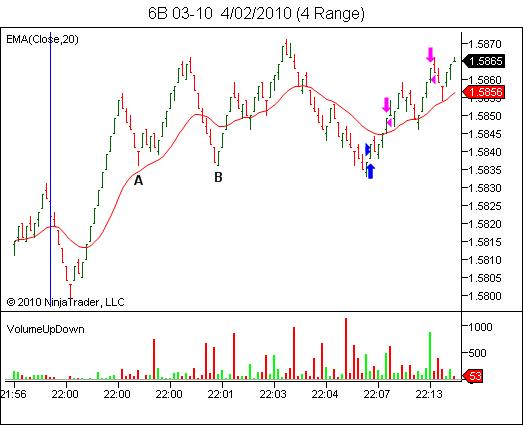 Part 1 exit was essentially a scalp, just back up to the vicinity of the 50 level, allowing a free-trade for Part 2. Part 2 exit was planned to take profits just short of the previous swing highs (actually just below the previous highest 1-min close). The intent would be to move this target higher if price action gave an indication of a potential break to new highs. The rally though was on reduced momentum, so didn’t provide me with sufficient breakout potential. Although it ultimately did move to new highs, I expect I would have stuck with my original exit target.

Hope that helps a bit,