After several days of post-Hurricane-Sandy nothingness in the markets, finally the Crude Oil Inventories report was being released. Perhaps this will move the markets! Postponed twenty four and a half hours from it's usual release time, it's been highly anticipated at my trading desk.

Thankfully it didn't disappoint (or at least the first 10 minutes didn't anyway – the rest was rubbish).

Even more important though… it gave us a trade to review.

The following trade is a simple pullback comprising of one short single-swing leg. 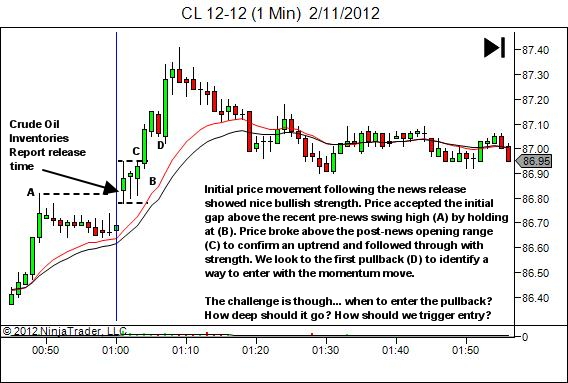 These can be a challenge to enter. How deep will the pullback go? When is the right time to enter?

There are numerous ways to enter a simple pullback. The following diagram offers a few of the more common methods I use (all based on lower timeframe data): 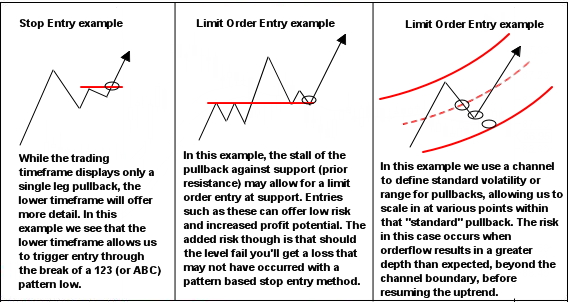 And there are infinite variations on these themes.

That's not quite what I did in this case though. Today's entry was a little more discretionary.

The decision to enter was based upon the same concept as occurs with traps; a topic that YTC readers should be well familiar with.

Traps typically involve a break of a key level that appears to offer a reversal or breakout opportunity to retail traders, which then fails and offers opportunity to those thinking one step ahead of the game and anticipating the trap.

In this case it's not an obvious trap. But let's look to the 1-minute trading timeframe chart again to see where it sits. 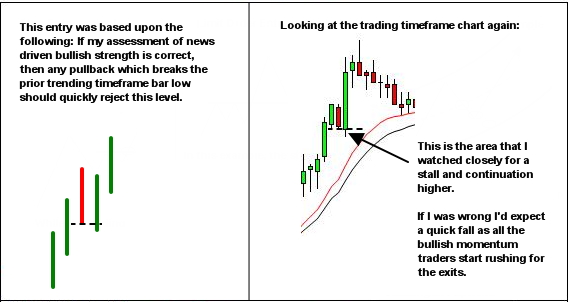 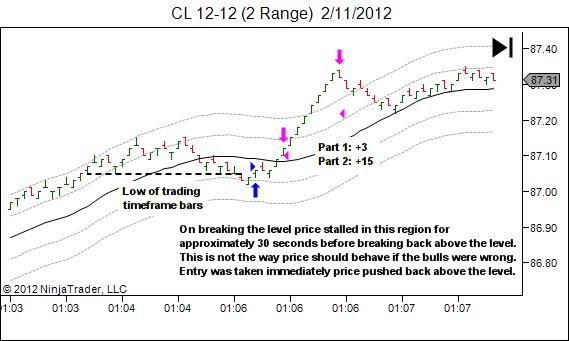 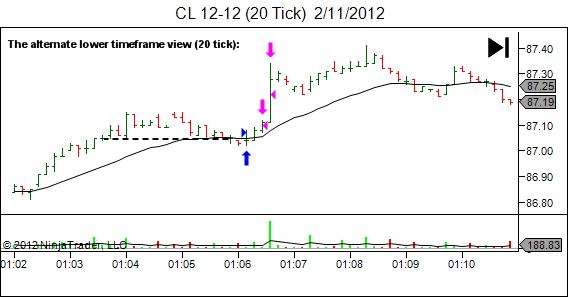 Of course the other methods discussed earlier would have worked fine.

A 123 pattern break was available on the 2-range chart, although it would have got in two ticks higher. I actually do quite like this method for CL… but breaks of key levels and potential traps always catch my eye.

Likewise the channel showed great potential for entry via limit orders as price pulled back into the lower sections of the channel. This is NOT my preferred method in a more potentially volatile instrument such as CL, especially after a potentially high-impact news release.

The outcome was ok. Entry was superb; just a few ticks off the low of the pullback. Trade management though left a lot to be desired. It's fair to say that I significantly underperformed when compared with what was available. Part one was essentially a worked exit to reduce risk when the post-entry did not rally as quick as expected. And as Murphy's Law suggests, price then exploded higher immediately after my part one exit (the delayed paint of the exit order marker on the 2-range chart showing the speed with which price moved). Part two had the initial target order sitting above prior highs. My intent had been to move it higher as price rallied but the order was caught by the explosive move before I had time to react.

But then my intent at these timeframes is to scalp small pieces out of the price swings. I never intend to buy & hold!

Post-trade regroup procedure complete… I move on to the next trade!