Last week we discussed a common problem with new and developing traders – difficulty accepting losses as a normal part of the game. 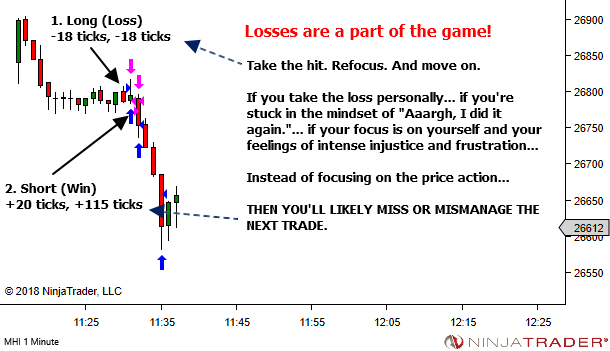 And we discussed a simple idea for moving beyond this problem, through seeking profits over a larger series of trades rather than any individual trade.

You can see last week's article here if you missed it – https://yourtradingcoach.com/trader/a-shift-in-mindset/

This is the game. This is how your results will (typically) display over any series of trades.

The number of trades on each side will naturally vary. Sometimes you'll have more winners than losers. Other times more losers than winners.

But any series of trades will likely include both WINNERS and LOSERS.

They're a normal part of the game.

The aim then is to approach trading such that anything on the left side (losses) is small enough to easily be covered by one good trade on the right side (wins).

Let's pair them off…

Of course… if you end up with excess on the left then this sequence of trades has no edge. And you've got more work to do.

But this is the ultimate aim. A series of trades which includes both winners AND losers, in which pairing them off leaves you with an excess of winners. Achieve this consistently and YOU'VE GOT EDGE.

It might help you to carry out this exercise each weekend, creating a table with your results from the prior week. Firstly to reinforce the fact that it's ABSOLUTELY NORMAL to have both losses and wins. But secondly, to give you a feel for how much of an edge you have. Or how close you are to achieving edge.

Or… for some of you… it might help to carry out this exercise live. In real-time. As you trade each day. Add your losses to the losses column. Add your profits to the profits column. And pair them up whenever you can. The aim being to keep your losses small enough so that they are easily covered by a single win. And more importantly, achieving a confidence boost when you get a profit on the right side of the table, and have no losses available to pair it with.

Give it a try if you think it might help you visualise your "series of trades". And hopefully reduce any concern over losing trades. After all, they're just a normal part of the win/loss table and easily covered by pairing up with the next win. They're no problem at all. Take the hit. Focus. And move on.

Last Sunday I shared this great video on YTC Facebook and YTC Twitter: It led to an email discussion with a YTC newsletter reader who accepts the value of motivation to a trader, but couldn't see the relevance of the Bruce Lee quote in the middle. The quote commences at 1:37, if you wish…

Let me share a recent email from a YTC reader that I absolutely loved. I just would like to share with you this chart…it is amazing how the upper part is almost a perfect mirror image of the lower part… (it is Wyckoffian with 123 patterns both at Accumulation and Distribution)…offering among others 2 great…

For the last year or so my trading computer has been on a desk just to the left of my work computer. This has been fine except during quiet periods of price movement, when I've often found myself tempted by the work computer. All I have to do is turn to the right and…

The whole analysis process for a novice trader is aimed towards finding a winning trade. Sure, they know intellectually that not all trades will win. But surely this one… the one they worked so hard for… the one that all their analysis says is a good trade… it's just got to win! And then…

I was driving in my car the other night with my twin daughters when the conversation somehow turned to what they wanted to do when they grow up. Naturally, being only nine years old, they had many ideas. There were those that I was very happy with – an astronomer, a veterinarian, a professional soccer…