I had an interesting email exchange with a trader a couple of weeks ago, who is struggling with occasional massive losses. 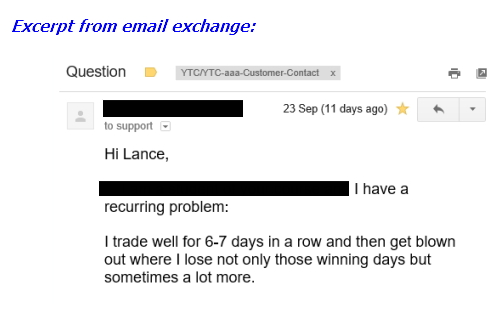 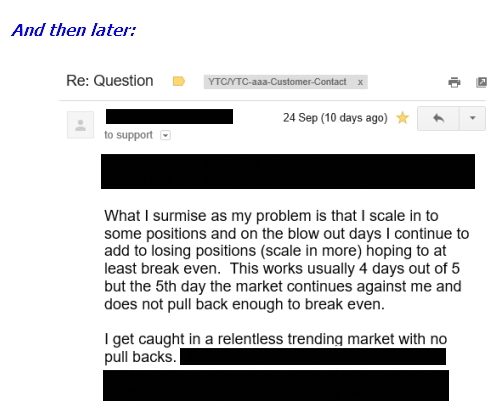 I've had the opportunity to speak to a LOT of traders over the last 8 years of writing these articles. You'd be surprised at how common this problem is.

We discussed several options to investigate further, related to money and risk management, strategy, and of course psychology.

What I wanted to share with you all today though, was just one simple concept that might help, should you ever find yourself suffering from a similar problem.

It's just a slight shift in mindset. It may not be easy. It certainly won't be the full solution. But it could well play a part in overcoming the problem.

Here is what is happening right now: 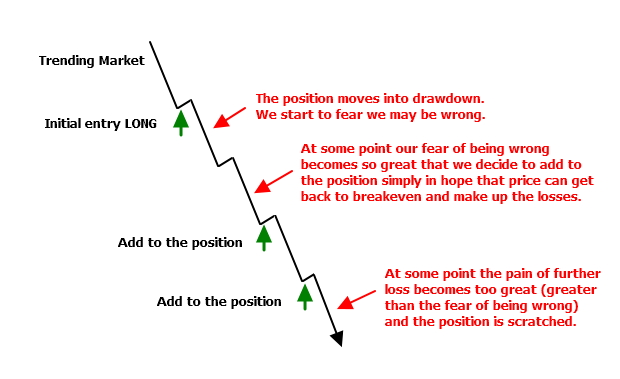 And even more than losing, we don't want to admit we were wrong.

So we fight! We double down on our earlier decision, hoping, wishing and praying that the market will turn. Just enough to get us back to breakeven.

There is a problem though.

You said that yourself! 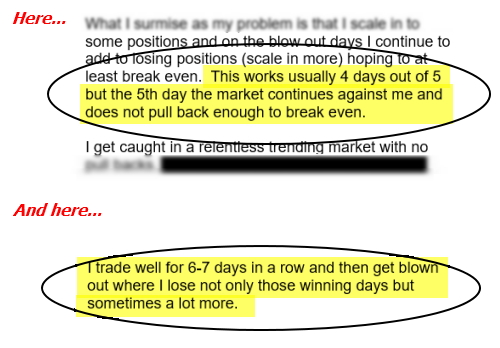 Sure, sometimes it will work out just fine, but it's only a matter of time till the market provides another extended drawdown which takes you out of the game.

Your current money and risk management plan provides you with NO EDGE.

And here's a key part of the problem:

Let's repeat that for effect!

You're fighting against a strong and persistent trend!

I'm not saying don't fight. But if you're going to fight to get back to breakeven, let's see if we can do it a bit smarter. Let's rethink this concept. 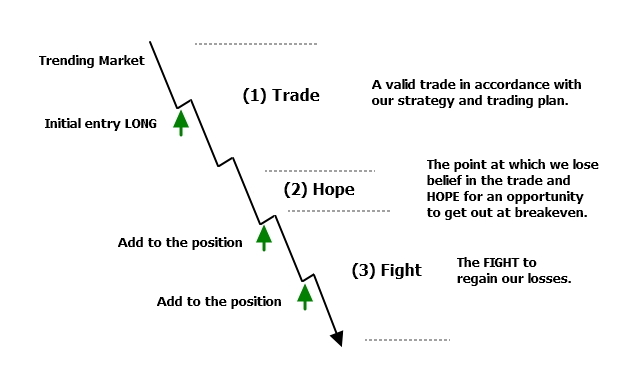 What if we planned our fight differently? 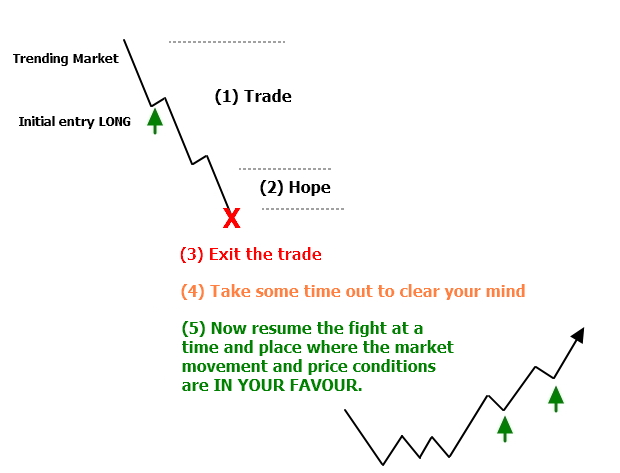 Use HOPE as the trigger.

Any time you find yourself HOPING that an extra "unplanned" entry might just help you get out at breakeven… EXIT.

Take some time out to clear your mind.

And resume the fight at a time and place when the market movement and price conditions are IN YOUR FAVOUR.

Don't make this game any harder than it needs to be. Fight to regain losses at a time and place of YOUR CHOOSING.

It's the same challenge; taking a drawdown back to breakeven and maybe even positive territory. But you're doing so when the odds are more in your favour.

And even if four out of five times the market would have got you out at breakeven, had you just entered one more time, ignore it. Remind yourself that averaging down has proven to have NO EDGE. Because the fifth time will not only blow out to a huge loss, but will also take away all these previous gains.

If you're going to fight to regain losses… do so at a time and place of YOUR CHOOSING.

Step aside. Clear your mind. And resume the fight at a time and place when the market movement and price conditions are IN YOUR FAVOUR.

It's just a slight shift in mindset. But it can make a really big difference.

PS. A pro-trader will NEVER EVER let a single trade, or a sequence of trades, take them out of the game. Always, before any other goal, your priority is to survive to trade another day. If your current money management plan involves adding to positions just based out of hope and fear, then your money management plan sucks. Fix it. Or you're unlikely to last long in this business.

Trading is a performance activity. So much of your success or failure comes down to your ability to make quality execution decisions in real-time. And so much of that depends upon your ability to keep your focus OFF yourself, during those times when things are not going quite right. Take the focus off yourself. And…

It's normal from time to time (often even) to get frustrated at the overwhelming task that lies ahead. At these times, I find it incredibly helpful to pause and reflect on exactly where I've come from and how far I've progressed. Yes… way back in the early days… I bought into Croesus Mining near…

Last week we looked at a session that caused me some troubles. See here if you missed it – Good Trading Isn't Just About Winning Trades. It wasn't a losing day. A "bad" day isn't necessarily a losing day. This one profited. Cycling from negative to positive and back again to negative and then…

I’m certain there are not many “jobs” at all where people look forward to Mondays. Trading is the only one that I’ve found. Even more so when I’ve been away from the markets for a while. So this was my social media post sent out pre-session on Monday. A little reminder to slow down and…

(NOTE: This is not an advertisement! It's a report of my first attempts to introduce biofeedback into my trading routine.) Several weeks ago I advised in the YTC newsletter that I'd bought an emWave2 biofeedback device. My plan was that I'd experiment with it over the following 6-8 weeks and report on it's effectiveness as…