Charts this week come courtesy of a trader who contacted me seeking some help.

This is something he finds himself doing time and time again.

And in my experience he's certainly not alone.

This is such a great example. I'm really pleased I can share it.

The original images were too large to fit here, so I've included two smaller segments of the larger chart. The market and timeframe have been removed. Examine the charts as if they're your own market and your own timeframe.

In case it's not obvious, all trades here are SHORT. 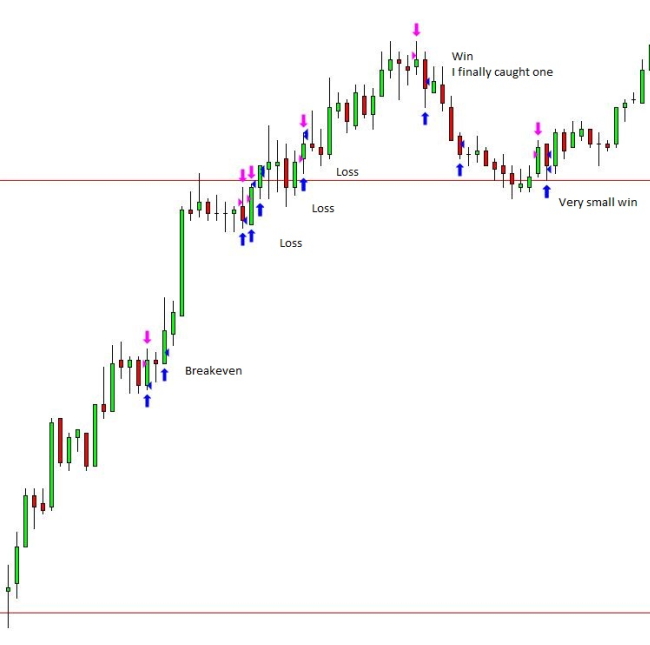 If you consistently trade like this you are NOT on the right path.

This is not the way to win.

And it doesn't always need to be such an extreme trend.

The pain continues… a little bit later in the same session…

All SHORT except for the second last trade. 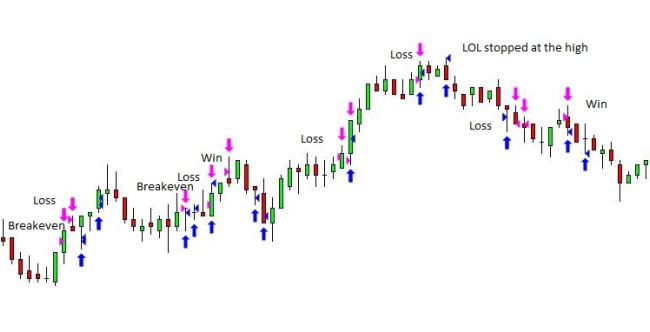 If you have this problem of continually fading an obvious market bias, here's a starting point for correcting the problem:

First, gather some chart evidence which highlights the problem.

Third, feel disgust at the results.

Fourth, try to understand the beliefs which lead to this behaviour.

Fifth, implement checks to catch yourself fading a market bias as early as possible. And controls to limit
further damage.

And finally, continue to monitor your charts and stats in future.

If you don't think you have this problem, but are not yet consistently profitable:

Look back over your charts from the past three months to find any sequences of trades where you are fighting an obvious market bias. Print the chart. Quantify the damage through examining the stats.

If you find it a rare occurrence, or not damaging your edge in any significant way, then that is great news.

But you may just find the opposite. You may be surprised at the number of times you do get caught out, fighting against an obvious market bias. If so… this is also good news. Follow the earlier steps to understand and correct the problem.

What other suggestions would you make? What have I missed? Please add your ideas to the comments section below.

A common complaint I hear from traders is "the broker ran my stop!" Here's the thing though… it's usually not your broker. It's your failure to properly recognise the real nature of price movement. The nature of the markets is one of tests, retests and probes of prior levels. If you've developed a belief about…

I recently sent out the following two posts via social media, discussing the importance of having a plan in place to quickly clear your mind and get back into the game, whenever you sense frustration of any kind: In response to these posts, I received the following exceptional email: Hi Lance, I liked your recent…

How Can I Get More Discipline? Here is an excerpt from an email I recently received: EMAIL (Excerpt): … one of my biggest hurdles is still discipline. I’m beginning to think I might need some help in this area. Do you know of anyone who has successfully helped people with their discipline? RESPONSE: Poor discipline…

One of the great things about being involved in trading education is that it provides me with the ability to chat with a LOT of developing traders. Common themes appear over time. This is one of them… "Can you review this trade. It's a trade idea which I thought was good, but it just…