A trade sequence from earlier this week prompted me to revisit the Reassess Point; a concept introduced almost a year ago here – https://yourtradingcoach.com/trader/the-reassess-point/.

In that article we explored a change of mindset that helps avoid the frustration associated with premature exits and missed opportunity.

This is how most of us are taught the game is played: 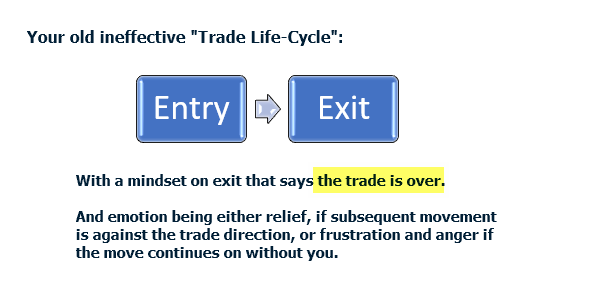 And yet, how many times do you exit at the target only to find price continue on without you. Your target may have made sense at the time of trade entry, but subsequent orderflow shows that so much more is available.

And how many times have you scratched a trade as it stalls in the entry zone, only to then find it slowly… and then suddenly… finding the pressure necessary to work through the stall region and beyond. Again, without you.

And how many times have you been stopped out, only to find that the trade idea was good but that you simply misjudged the short-term volatility around the entry zone.

These happen. They’re a normal part of the game.

But there is a way to reduce the frustration, if we can recognise what has occurred and consider re-entry.

This was the plan discussed last time. Reframing the trade life-cycle. And developing a mindset that doesn’t switch off, but remains focused for quick recognition of re-entry opportunity if and when it is available. 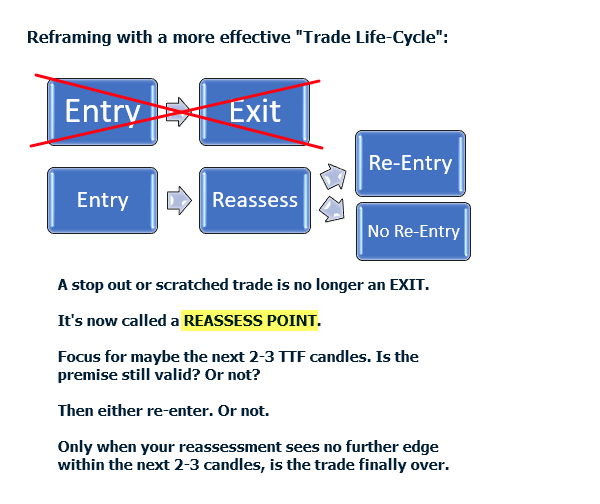 Yes, you still exit the trade. But it’s no longer a final, game-over, thanks-for-playing situation. It’s a chance to reassess the situation with a clear mind, unhindered by any current open-trade risk and emotion.

The position may be flat. But it’s not over. Not yet.

Two to three candles at most.

Only when your reassessment sees no further edge, is the trade finally over. 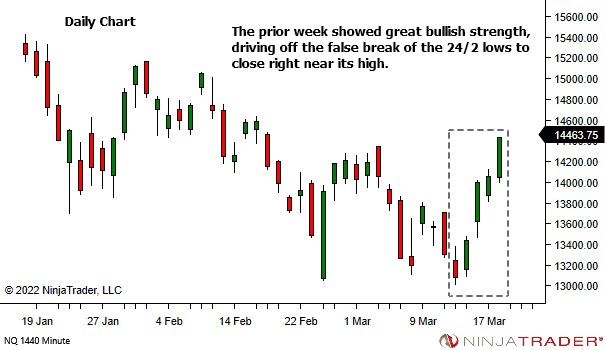 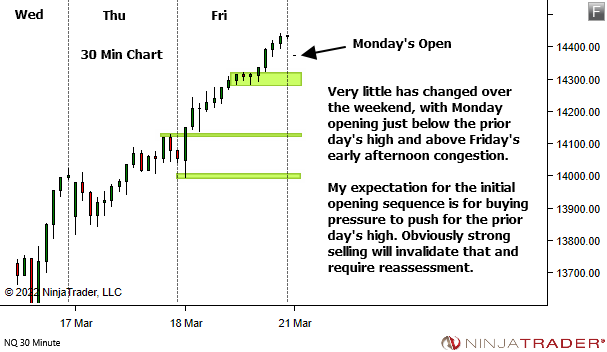 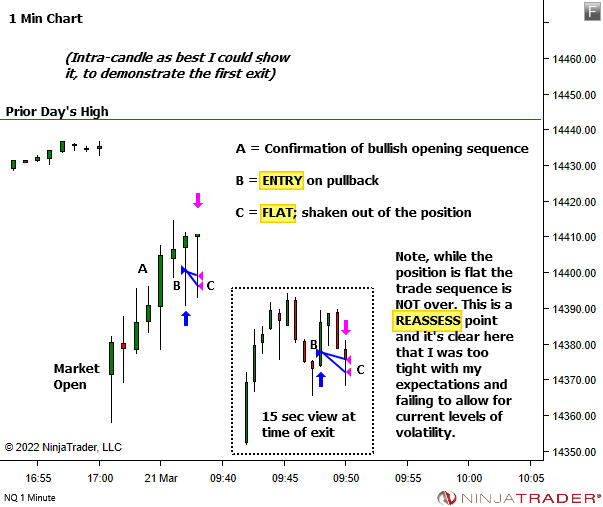 The premise is still valid.

I need to find a way back in. 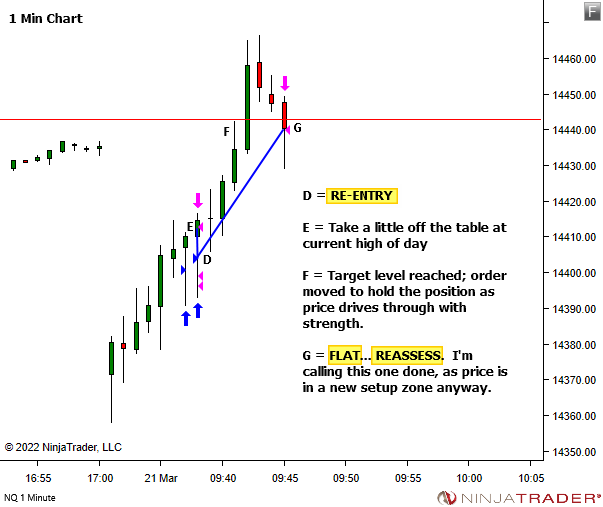 This was a good application of my process, which clearly and unambiguously states that an exit is NOT final until the trade is reassessed. If the premise is still valid, seek re-entry. If not, only then is the trade over.

Let’s continue, as the market is in a prime position to offer us either a BPB or BOF setup. 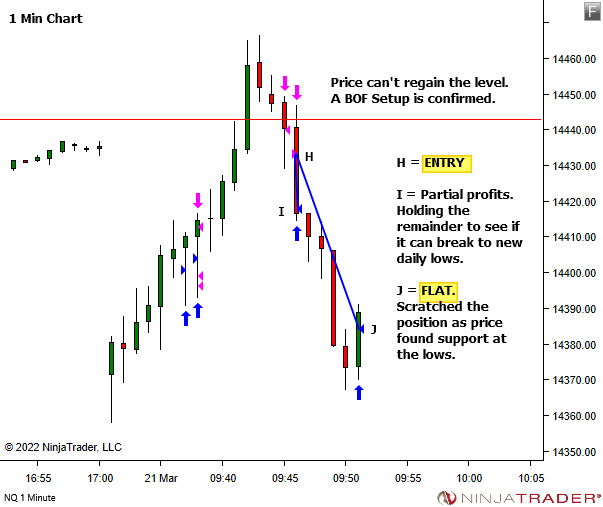 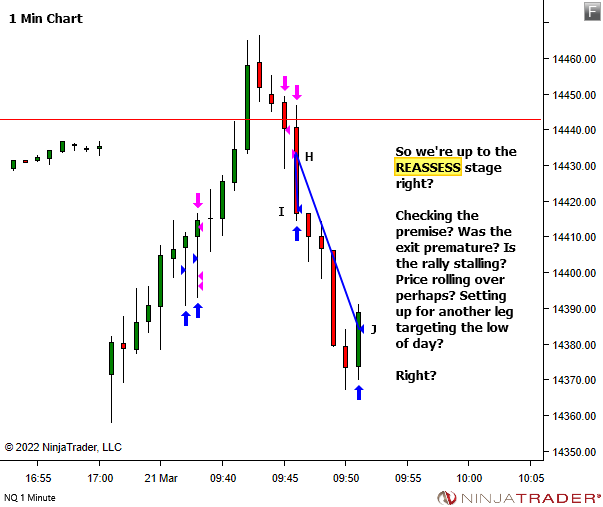 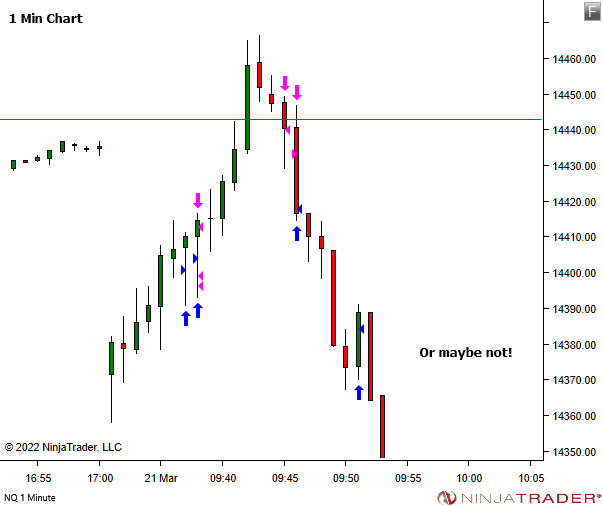 Instead, I’m off in La La Land congratulating myself on a job well done. And marvelling at the fact that the market, at almost half an hour from the open, still hasn’t put in two complete price swings.

A COMPLETE DISREGARD FOR PROCESS.

Don’t get me wrong. The outcome was nice. Very nice.

And had I attempted re-entry but not found a way back in, I’d completely accept the missed trade. It simply wasn’t mine to take.

But to not even try… that’s not acceptable.

That’s not the standard I set for myself. I can accept failure. I can’t accept not trying.

When the trade exits, it’s time to FOCUS.

Check the trade premise and if it’s still valid, find a way back in.

This weekend… review your results from so far this month and see if you can add to your edge through making re-entry a formal part of your process!

What is the greatest risk you face in trading? Is it loss of money? Certainly, that’s what most traders believe. I tend to disagree though. In my opinion we have something much greater at risk, that very few of us consider during the ‘learning phase’. The American political journalist and author, Norman Cousins, is quoted…

Context: The trade idea: The entry: Out: How I think on trade exit: All exits are temporary. Pause and reassess. Consider re-entry if the premise remains valid. Sometimes it takes two entries. Sometimes it takes three. There are no ways around this. In the uncertainty of market action it's unreasonable to expect that we…

Let's start with the daily chart for a bit of context… I know right! When was the last time we looked at a daily chart? No need to panic. Oxygen masks have not dropped from the ceiling. And we'll only spend a short time at these heights. You know those days where you've got…