In the fallout of the Will Smith & Chris Rock incident this week, our social media world was overwhelmed with memes. Some of which were quite clever and make social media almost borderline bearable.

But not this one.

This one led to an involuntary “FFS!” response followed by rapid scrolling. 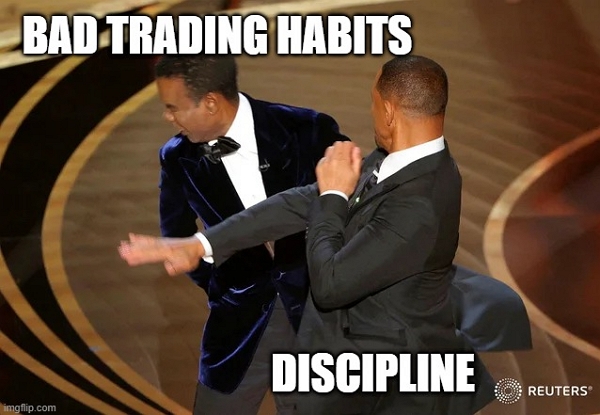 Sorry. It’s not that easy.

I get what they’re saying. It’s not totally wrong.

My concern is that it’s not that simple. This was “old school” trading psychology.

It sounds good. But it just doesn’t work.

We’ve all done that. And yet, the problems keep appearing.

Try as hard as you can, with all the willpower you can muster, and sooner or later you will slip back into old habits.

The reality is that resolving these issues will likely be difficult, for all but the most simple of bad habits. In some cases involving deep analysis of feelings and thoughts to provide insight into subconscious patterns of behaviour. For deeper underlying issues you may even need to employ the help of a professional.

This is beyond the scope of today’s article.

What I would like to provide though, is something to try first. Something that might simply AVOID the situation, or at least minimise the frequency of occurrence.

Again, the aim is to set up your workspace in a way that either avoids the situation entirely, or helps to minimise the frequency with which the problem will occur.

This old YTC social media post offered one way to achieve this: 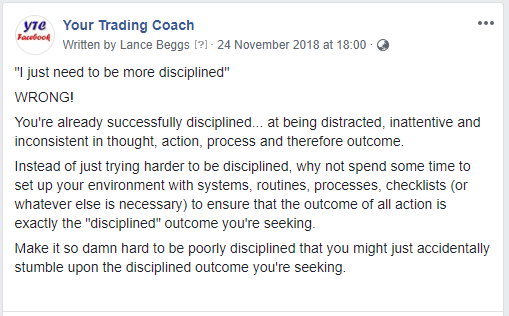 In my aviation days we always operated aircraft with physical checklists. Process was SO IMPORTANT that although we knew the steps by heart, we accepted it was necessary to work step-by-step through a hardcopy checklist. And often in a challenge and response method between Captain and Co-Pilot.

I know of many traders who operate in a similar manner, using a documented checklist or flowchart to guide themselves through their trading day. Consider whether or not that may help you.

But environmental changes don’t just have to be checklists. Here’s another example… tech solutions!

Let’s return to the issue discussed in last week’s article – The Reassess Point – 2.

My trading process has a clear and unambiguous rule:

And so we discussed a sequence of two trades. The first in which I applied this rule correctly. The second in which I completely disregarded the process.

Mind in neutral… silently basking in the glory of a trade closed nicely in profit. And completely missing the fact that my exit was premature and a whole lot more was available.

The fact is that I’m quite good at focusing and seeking re-entry from a loss, or scratched trade. But I’m far more inconsistent in following process after the bigger winners.

There seems to be a pattern developing.

So last week’s article was a part of an attempt to improve discipline. Accepting the problem, admitting the problem publicly, acknowledging the behaviour as failing to meet the standards I set for myself. And vowing to do better next time.

This is the “willpower” solution.

But that’s not all that can be done.

Because I recognise that willpower alone, is rarely enough.

So here is something else I did.

I modified the environment in which I trade, to make it harder for me to “forget” the re-entry assessment.

My platform (Ninja Trader) has audio alerts whenever a trade exits. A voice that says one of the two following statements:

The good news is that you can change this text. So I simply amended them to say:

Simple. And incredibly effective. I’m not sure why I never thought of this before.

Granted, I’ve only used this for a week so it’s early days in the trial. But I can promise you that there has not been ONE trade this week where I have not been reminded of the importance of reassessing the trade premise on exit.

But an environmental change which makes it so damn hard to skip the re-entry assessment, means that I delay (for now) the deep dive into my subconscious to find out why I tend to relax whenever I have a small but nice win, rather than really pushing my advantage.

If you set up the environment to make it harder to be poorly disciplined, you may find there is very little else required.

PPS. The following is the process for making this settings change in NinjaTrader. Other platforms likely have this feature as well so please refer to your help files and tutorials.

(A) The current sound settings are here: 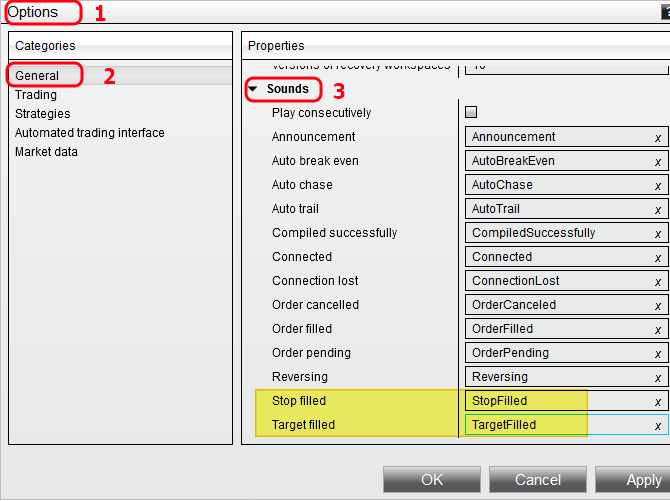 (B) The audio files that are played are found in your NinjaTrader Program Files folder:

(C) Use a text-to-speech converter to create new audio files. This is the one I used: https://www.text2speech.org/. There are dozens of others to explore if you wish.

(D) Download your new files to the sounds folder:

(E) Set the new files as the default sound to play whenever your stop or target is filled: 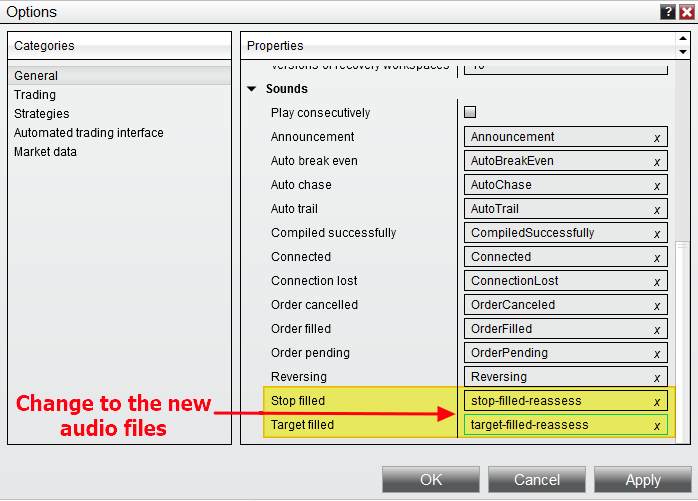 I don't know if you're like me, but if you are then you'll have this dark-side of your personality that surfaces from time to time. A side that just WANTS TO TRADE. A side which doesn't so much care about the conditions of the market. Given the slightest hint of opportunity, it wants to…

"The more you have, the more you are occupied. The less you have, the more free you are." … Mother Teresa Anything on your charts that is not required for your strategy, or does not act to simplify your analysis, should be removed. It acts as a distraction and increases (even if just slightly) the…