This has been one of my favourite themes of the last year or so. Let's go over it one more time.

It really is that important!

Here's an extract from an email discussion I had on Wednesday with another trader in response to a really challenging sequence of price action.

(5) This point may not be a problem for you. You might understand it completely. But in my experience, while the vast majority of "developing" traders say they do understand this, the reality is that very few traders actually do REALLY GET it at a deeper level. Their actions and decisions prove they don't get it. And often when I'm sent an email asking "why didn't this trade win", it's obvious that this is the case – they don't really understand the game.

It is not your job to win on any particular trade.

It is your job to identify opportunity that contains edge. And to take it and manage it well. Some will win. Some will lose.

Our aim is not to profit on any particular trade. But rather to profit over a series of trades.

Feel free to define a "series of trades" based upon whatever number you consider provides a sufficient sample size. For the sake of this email, let's assume it's 20 trades, which is the absolute minimum I'd consider as sufficient.

And in fact, there will likely be strings of losers, from times when either the market environment was not optimal. Or our decision making was suboptimal.

Again, that is completely normal.

So our decision making pre-entry should be in confirming that (a) the trade idea has edge, and (b) regardless of whether it wins or loses, it's a trade that we really want contributing to our 20 trade sample.

And during the trade management stage, at the forefront of our mind is always the thought about whether or not we still want this contributing to our 20 trade sample.

The reason for bringing this up, is because the interaction with S/R that you have provided in your example, is rather messy. We don't know that will be the case until after the fact, when we can view the charts with the benefit of hindsight. But it's not unusual in messy price sequences to end up with two, or maybe even three losses or scratched trades. This is completely normal. And it should be absorbed within the 20 trade sample, with other better sequences providing sufficient profits to overcome them.

This is also why I will typically only limit myself to two attempts at a trade idea. Three at most (if the prior losses are less than 1R each). If after these 2-3 attempts, I've not captured a good entry, then I'm clearly not reading the market well. Stand aside. And wait for the structure to change. If one further entry would have been sufficient to capture the planned move, and it now occurs without me, so be it. It wasn't mine to catch. Let it go and move on to the next.

This is VERY IMPORTANT. In fact, key to success. ALWAYS be thinking about the larger sample of trades. Is the current trade one you want contributing to the sample? And if it's one of the losers, keep it small so that it can be easily overcome. And if it's one of the winners, work to take as much out of it as you can.

There is no need to review the sequence from that email.

Let's instead look at a few trades in the first hour on Tuesday.

Trades in which there is nothing particularly special. They're just normal run-of-the-mill trades.

Some lose. Some win. 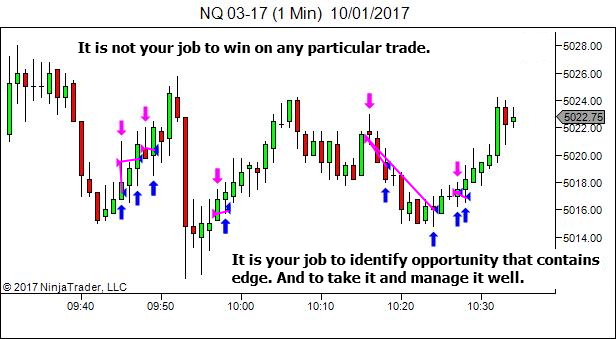 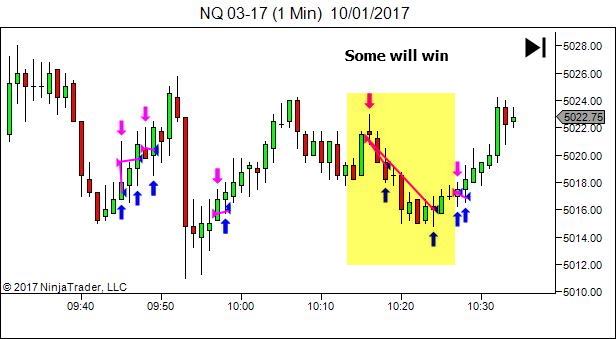 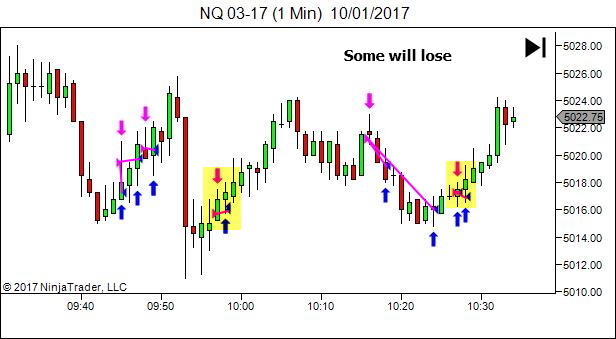 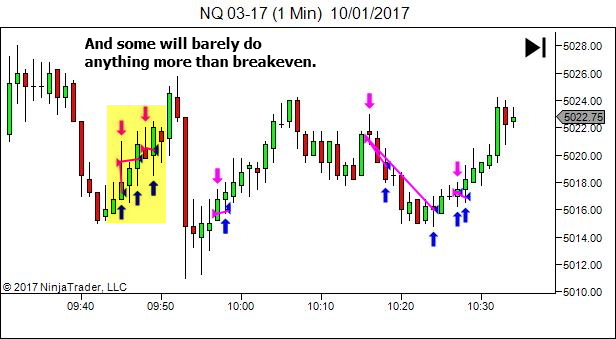 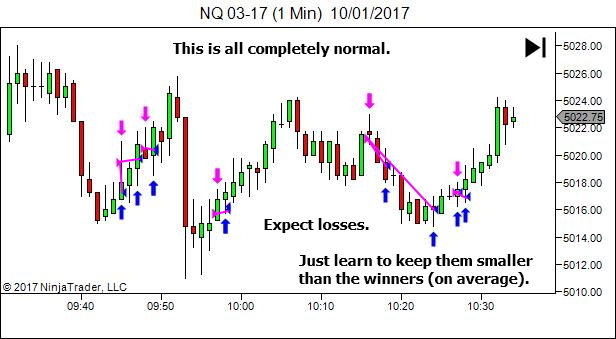 Let's look at the two losses… 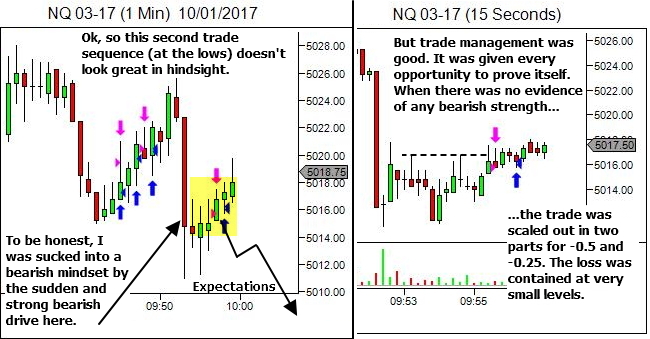 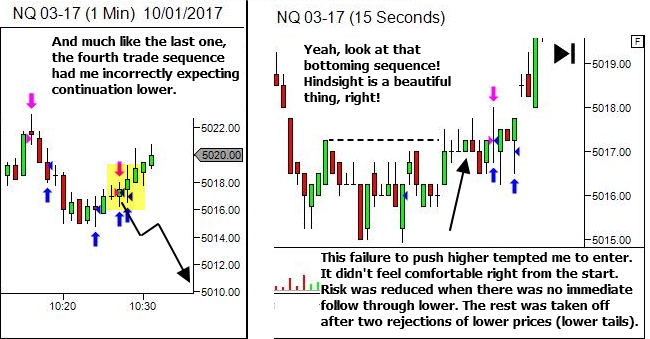 SO THAT IT ONLY TAKES ONE OR TWO SMALL WINNERS TO MORE THAN MAKE UP FOR THEM. 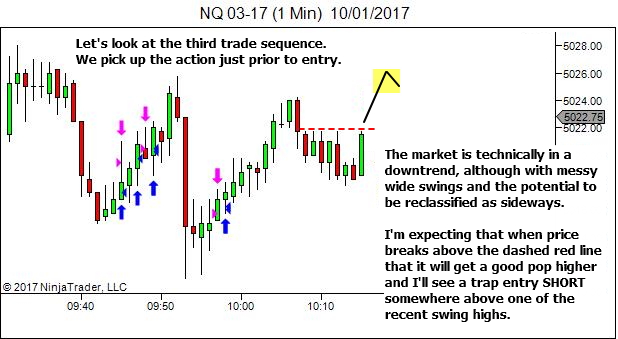 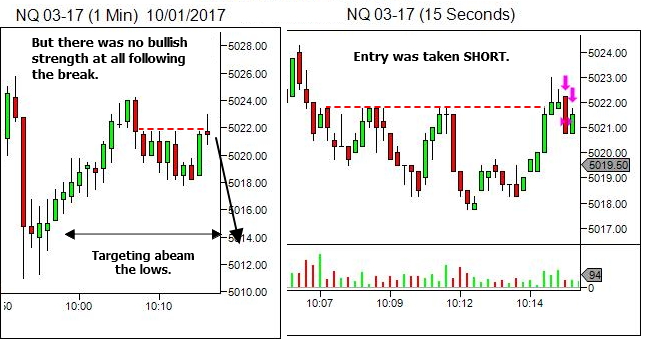 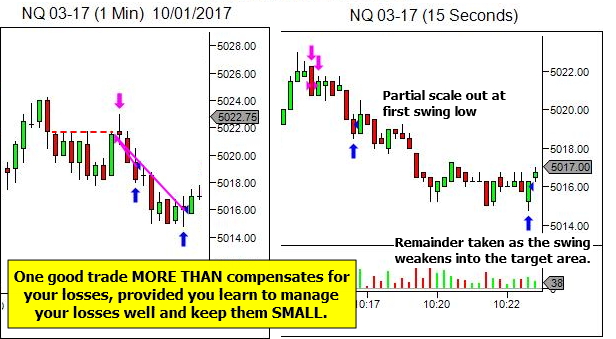 Stop worrying about profiting on every single trade.

Aim instead to just manage them well.

And seek to profit over a larger SERIES of trades.

First up… let's identify the higher timeframe S/R structure at the session open (18 minutes before the trade). We'll do that via two charts, the first using the day-session data only and the second looking at the overnight data as well. Now let's move forward 18 minutes on our trading timeframe to see the trade…

I want to share a simple process used by a reader in addressing a recurring problem in his trading. I was happy to see him use this approach, because it references a post-session technique I shared quite a few years back. And perhaps it will be useful to you as well, in ensuring compliance with…

Most trades will typically fall in the range from -1R to +1R… hopefully more on the positive side of that range. But for most of us this does not mean you should be targeting 1:1 trades all day, every day. By all means take them if you assess them as being a higher probability…

We have been blessed with some absolutely amazing markets lately. Incredible daily ranges. Incredible opportunity. And incredible risk, if not played wisely. So while it’s tempting to use today’s article as an ego-boosting review of a couple of winning trades, that’s not really what motivates me with my YTC writing. I’m more concerned about your…