I think it's time we revisited a topic we discussed a few years back. The fact that an individual trade does not provide sufficient data to allow you to make informed changes to your plan.

Changes MUST consider the impact across a series of trades.

I see this problem repeatedly in email conversation with new traders, who have not yet understood the nature of edge.

Their questions come in various forms but this latest one is typical of the general nature of all of these questions:

The trade involved a 2R profit at the target, which could have been 4R if he held for a trail exit. An addition of 2R to the account balance.

And so the trader was disappointed. And frustrated. Because when viewed after the fact, it was just SO OBVIOUS!

But here's the problem: 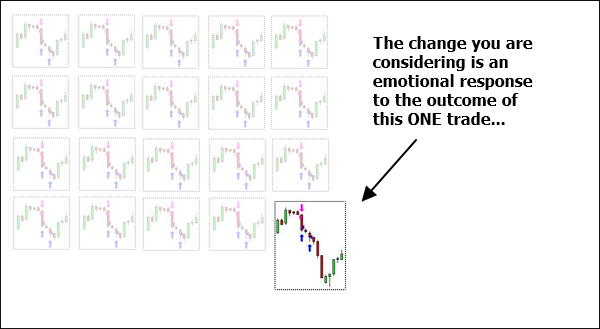 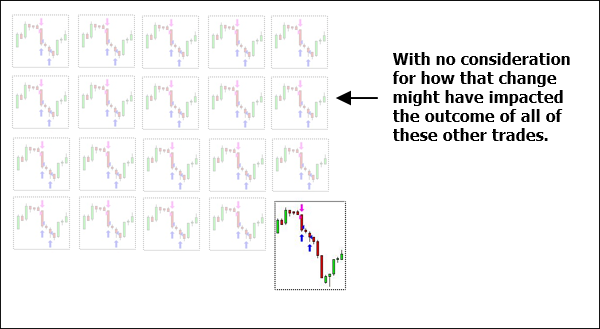 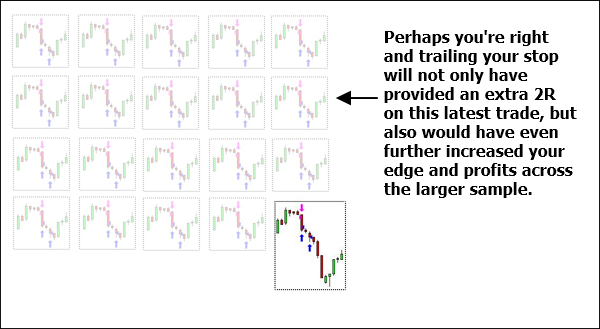 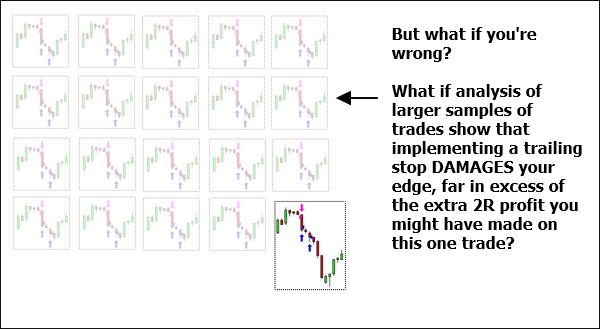 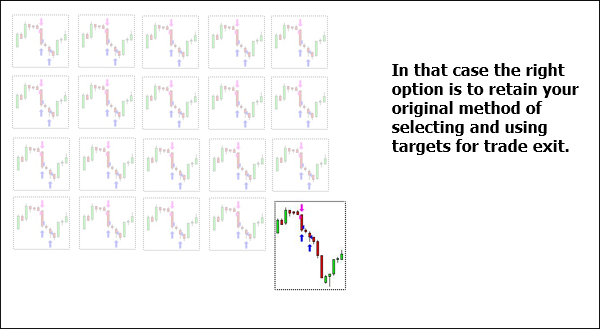 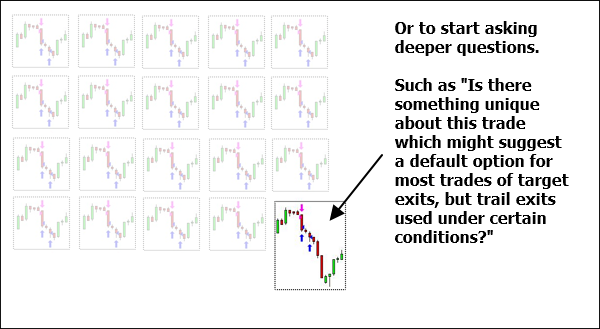 This is the whole point of a post that I shared about a fortnight ago. 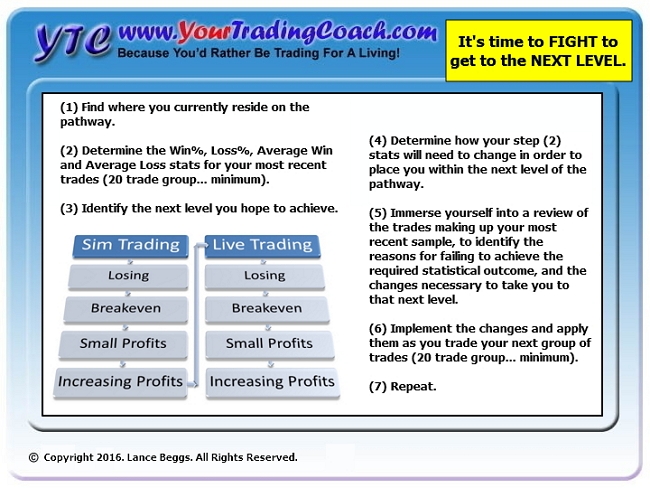 Progress comes from analysis and review of your performance over a series of trades. Not individual trades.

Changes to your plan must come from analysis of results over a series of trades, whether you prefer to use samples of fixed number (20, 50, whatever) or a fixed time period (weekly, monthly).

You ask, "I took profits on this trade at the target area, only to see it then continue on without me. I could have got twice the profit if I held. Do you think I should use a trailing stop rather than targets?"

Or even a more generic, "Do you think I should make "xyz" change to my plan?"

You have access to this information. Do the work.

Assess the outcome over a larger sample.

And determine the appropriate plan of attack for your next series of trades.

You might argue, "But Lance, we don't know how the change will impact the next series?"

That is why you continue to assess. Make the changes and then reassess. Did they help? Or is further work required?

Continue to track performance. And continue to learn, grow and develop in pursuit of never-ending improvement in both profits and consistency.

But never due to an emotional reaction to one single trade. This is a game of profiting over a SERIES of trades.

Trade Session Review Example Following on from Part One at this link: https://yourtradingcoach.com/trading-business/how-to-conduct-an-effective-trading-session-review-1-of-2/, let’s look at an example of a missed trade. The example is the open of the UK session on April 6th, 2010, which provided us with a beautiful Asian session breakout failure trade. The three blue horizontal lines represent pre-session support and…

One week down. Fifty one to go. I hope you’re off to a good start. But I know there are some who already dread the outcome this year. At least two of you were chatting with me this week, following Wednesday mornings social media post. Their problems go FAR beyond what was discussed in this…

I've covered quite a few topics throughout 2014, but I believe the most important by far has been my attempt to have people looking for success over a series of trades, rather than on any individual trade. Not every trade idea works! But that's ok and that's normal. Keep the losses contained. And work…

This chart is from Thursday 19th March 2020. A couple of quick trades and then STOPPED. Done for the day. Why stop? Because today was a Hit & Run day! Trading is a performance activity. And it's our job to manage ourselves in an attempt to get as close to peak performance as possible….

You might like to consider your review process as the vehicle which drives your trading business to its ultimate destination. Whether that destination is ongoing improvement and eventual success… or continued mediocrity, frustration and failure… is completely up to you. If you've got nothing in place, here is a simple process to get you…