Do you have trading goals? 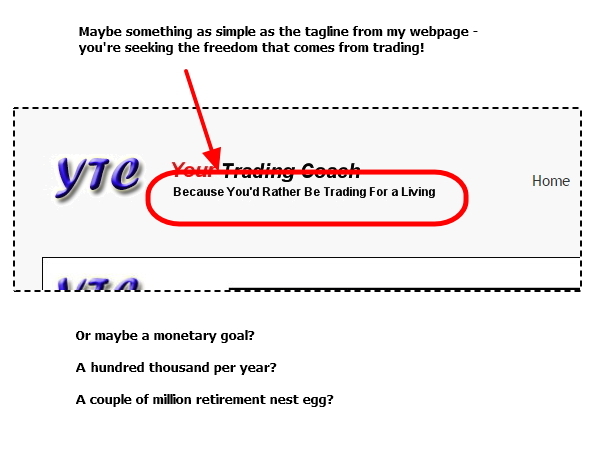 Whatever it is, that's fine.

As long as you're making progress towards that goal.

Let's be honest though… are you actually making progress?

I hope you are!

But I speak to a lot of developing traders and the fact is that MOST are not making progress.

Here is a problem I see over and over again:

The target is just too far away to be able to see any real progress.

And even worse, there is no solid plan for how to get there. 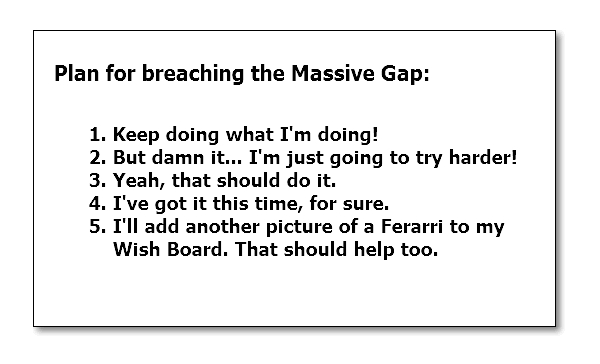 Much closer. No more than a month away. Ideally weekly.

Let's say for example that your goal is to achieve $100k per annum. But you're not yet able to ever achieve a positive week.

"That's too far away. Bring it closer."

"Which is how much per week?"

GOAL: I will aim to consistently achieve a weekly average of $2k.

Step 2: Reduce the size of the goal till it's just a slight stretch beyond your current capabilities.

A goal of $2k per week is fine. But if you're not yet even achieving positive weeks, it's kind of pointless.

If your goal cannot be reached from your current location, within three or four attempts, then your goal is crap. You'll just churn away week after week getting more and more frustrated.

Your goal should stretch you just beyond your current capabilities.

And it should be something you feel that, with improvements in process, you might have a chance of achieving in three or four attempts.

GOAL: Ok. Let's reduce the weekly target to a much more achievable $1k.

"Too much. You can't even achieve breakeven."

GOAL: Fine. My goal this week is to achieve a breakeven week.

"Good. You're close to that already. It's just a small stretch. Remember, when you achieve that, and can prove it repeatable, you will then set further goals to stretch to the next higher level. And so on and so on until eventually you're achieving your original goal."

Step 3: Focus on process improvements required to achieve this outcome.

Break the trading process down into as many smaller sub-processes as you can.

Find the one part that, if improved, will provide the greatest impact upon results.

And then set your goal to improve that part of the process.

It might not be sufficient in and of itself to reach your monetary goal. But it's a start. Once achieved, with consistency, you can then find the next area of improvement.

"Break the whole trading process down into parts for me. However it makes sense to you."

"Fine. Which area is currently contributing to your inability to achieve a breakeven week?"

"All of them. But ok, perhaps the trading ideas. Too many, when looked at with hindsight, are just in poor chart locations. Far too late in the move. In retail zones, I guess you could call it. Definitely not where the professionals are trading."

"So what process changes can you make, and what daily goals can you set, to give you greater chance of trading in good chart locations?"

"I can spend some time this weekend defining "quality trade locations" including the point at which entry is too late. I can put something in checklist form. And then I can then work this week with the following goal:"

GOAL: This week I will focus SOLELY on ensuring the vast majority of my trades are attempted in quality trade locations, in accordance with my new checklist. Quality entry and management are of little importance. I can work on them next. But first, I will aim to ensure I'm at least trying to trade in the right areas. I will consider this a success if by the end of the week, 80% of the trades are in areas that meet my definition of "right area" as best it can be determined at the right hand edge of the chart.

Ok, I totally made up that conversation. You knew that right!  🙂

But the point is that it takes the goal from something outside the realm of immediate possibility, to something that is much more achievable in a short timeframe.

Progress won't be guaranteed, of course. It might take three to four attempts, with further improvements to the process each weekend.

But if progress is not seen after several attempts, break down the process goal even further to something even smaller and more achievable. Your aim is to start accumulating small wins in the direction of your original and ultimate goal.

And if our trader achieves consistency in trading in better trade areas, but still fails to achieve breakeven weeks due to poor entry or trade management, then the process goal shifts to these areas. At some point, a breakeven week will be achieved. The goal might shift then to repeating this same level of performance, just to prove it's not a fluke.

And then… maybe aiming for something greater. Maybe three out of four weeks positive, with the losing week smaller than the average winning week.

Each step just slightly beyond the current level of achievement.

I don't know what your goals are. And I don't know your current level of performance. But whatever they are, if you're just churning away week after week without any clear evidence that you're closing that gap, you need to take action.

Step 2: Reduce the size of the goal till it's just a slight stretch beyond your current capabilities.

Step 3: Focus on process improvements required to achieve this outcome.

And fight to get to this new level.

Stop accepting failure. Redefine your goals so that you can achieve small incremental wins.

One step at a time.

You can do it!

The following image was posted a few days ago on facebook and received more "likes" than any other YTC facebook post so far. So I thought we should examine the concept in a little more detail. (By the way… see here for YTC Facebook if you're not already following it: http://www.facebook.com/yourtradingcoach)

There are some trade ideas you look at with hindsight which are quite complex and which may have been difficult to execute. And there are others which jump out at you as being really simple. If you're not yet profitable, then focus on the SIMPLE trade ideas. Identify them. Study them. Learn from them….

I receive a LOT of requests to review people's trades. Rarely winning trades. Almost always a trade which either lost or was scratched at or near breakeven. "Was this a good trade?" "Was I right to take this trade?" "Should I have (entered earlier / entered later)?" Or any other variation of these type of…