One week down. Fifty one to go.

I hope you’re off to a good start.

But I know there are some who already dread the outcome this year. At least two of you were chatting with me this week, following Wednesday mornings social media post. 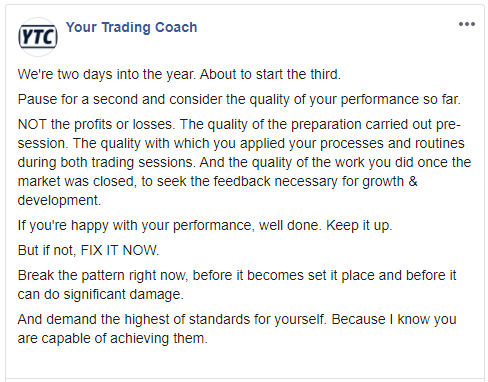 Their problems go FAR beyond what was discussed in this post. Not only was their daily performance sub-standard. But this also occurred on the back of almost non-existent year-end review and planning.

In one case there was none at all. Just cruising into the new year with the same plan and (lack of) preparation that guided his performance the prior year.

In the other case, there was an attempt at a review, but the outcome was little more than generic and useless statements such as the all-too-common, “I need to be more disciplined with taking my trades“.

If a social media post can act as a wake-up call to two of you, then I’m almost certain there are more.

The good news is that the second week of the year gives you a second chance at starting the year right.

The 7 Ps were repeatedly drummed into me during my Army life – Prior Preparation and Planning Prevents Piss Poor Performance.

In the trading world that’s not enough. You need edge. And you need the ability to execute it.

But it’s going to be a damn sight harder if you don’t plan and prepare.

Hence two of my other recent social media posts: 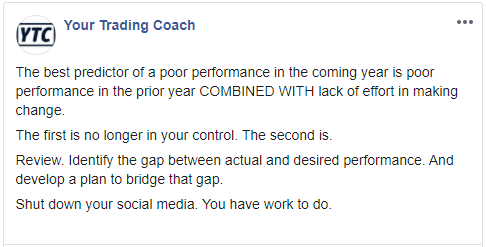 Nothing will change this year… unless you change.

So if your thoughts at the end of this first week of trading are basically, “Here we go again – same old crap!“, then it’s time to change.

Schedule time this weekend. Or maybe even the whole second week (you’ve still got another 50 to go). Take the whole month of January if you need.

You’ve been gifted a do-over.

Review your prior year’s performance.

Identify the gap between actual and desired performance.

And develop a plan to bridge that gap.

And please… implement a process for regular review and feedback throughout 2021. 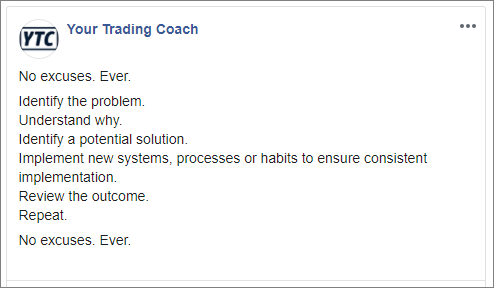 The second week of the year gives you a second chance at starting the year right.

Prepare for this coming week in the way that you WISH you prepared for the first week, having now learnt with the benefit of hindsight.

A recent article (https://yourtradingcoach.com/trading-process-and-strategy/reader-trade-review-es-test-of-resistance/) included the following image, which led to an email question asking "how do you display both price and the tick in the one chart, instead of in two separate windows?"   To display both price and NYSE Tick together in one window: Go to this page: https://yourtradingcoach.com/trading-business/ninjatrader-tips-and-techniques/ Scroll down to…

This is one of the most common questions I get from novice traders. They’re stuck at one of the first steps – deciding what market they want to specialize in. If you’re stuck here as well, then there’s something I’d like you to think about which may make the decision easier… You’re unlikely to get…

Question Received via Email: I'm an experienced long time, unsuccessful trader looking for profitability and consistency (aren't we all), anyway you seem to have way TOO much information. Can your method be boiled down to a few simple rules or is it more complicated than that. Sorry to be so blunt. Thanks. Initial Email Response:…

Reviewing Old Charts (AKA… "I can't believe I held the trade past that stop loss") I highly recommend keeping ALL your old trading charts and journal notes. They're great to review each now and then. Not only do they offer educational value but they also offer a source of motivation in allowing you to see…

I love this recent email exchange with a new trader… Email received: (We'll come in mid-stream as the earlier conversation is not relevant to this article!) Great Lance, thanks for responding and giving me all this information. I plan on trading highly liquid stocks and probably the intraday with the occasional swing trade. I've been…

When I receive two questions on the same topic within one week, I know that there is a topic I’ve neglected to discuss in sufficient detail (or at all). So it’s time to address the issue of trading a small account with one contract. Question from NJ: Quick question: Can you touch upon the…