When I receive two questions on the same topic within one week, I know that there is a topic I’ve neglected to discuss in sufficient detail (or at all). So it’s time to address the issue of trading a small account with one contract.

I like to trade a multiple part position because it’s a good fit for my personality and mindset.

Part one – higher probability with a smaller size win.

It’s certainly not the only way though. There are traders who operate with an All-In/All-Out trade management approach, which is essentially what you’re forced to do if you trade with only one contract.

Given that you said you like my two part approach though, my primary suggestion would be to either:

But let’s assume that these obvious solutions are not an option for you, for some reason, and you do wish to remain trading in your current market with your current account size with only one single contract (or mini-lot).

We’ll start by looking at a recent sequence of price action. 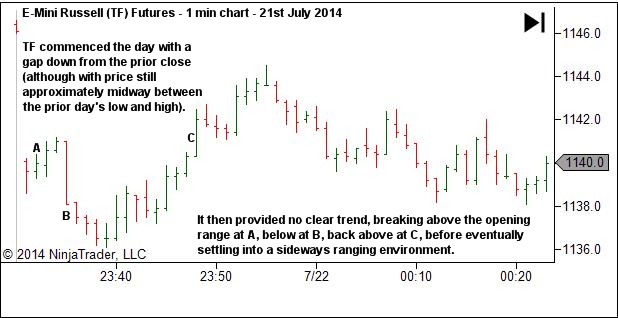 This was traded with two part positions (that’s how I like to trade).

But for the purposes of this article I want to break each into their component parts, as if part one and part two were separate positions with different management styles.

The chart below examines our part one trades. 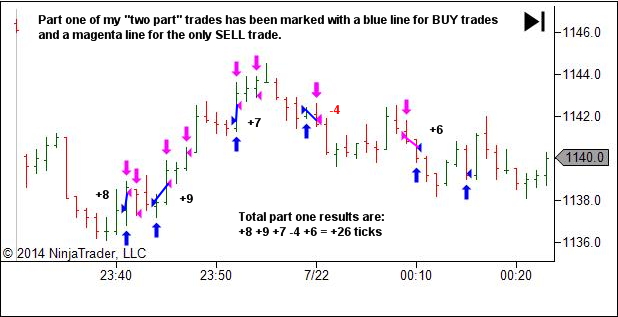 And in the following chart we see the part two trades. 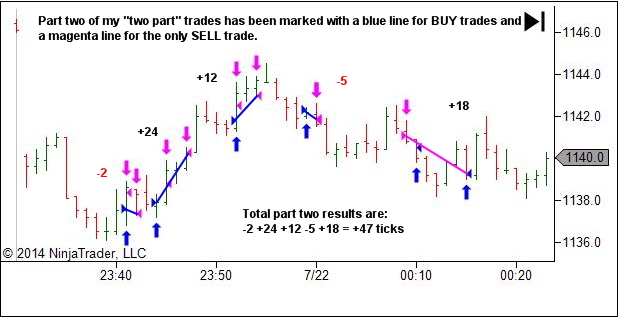 Now, not every series of five trades works out this well. Many lose. Many produce results around breakeven.

And you’ll find that in any series of trades it won’t always be part two providing the greater outcome.

In a particularly rangebound or choppy market environment you may find that part one outperforms part two. Likewise If you’re not reading the bias well and so don’t achieve much follow through to part two targets.

The profit in this series of trades is not the point of focus.

What I want you to observe is the following:

Sometimes part one provides the greater result. Sometimes part two does. But I expect that (over a series of trades) both will contribute.

So if circumstances force you to operate with one contract, it doesn’t matter whether you choose to adopt a “part one” management style (quicker, higher probability profits at the first obvious point of potential resistance) or a “part two” management style (holding for larger gains – a lower probability option with greater payout when it works). Either, over time, should provide an edge.

If you traded the sim using single part positions then the answer to your question is simple – continue to do the same in a live environment.

If you traded the sim using two part positions and only one part was consistently profitable – continue to trade that part in a live environment.

If you traded the sim using two part positions and both parts were consistently profitable – pick the one that was most comfortable psychologically.

Do you prefer the idea and feel of smaller, more regular locked-in gains; grinding your way towards your profit goals, while accepting that you’ll often watch the move continue without you after your exit?

Or are you more comfortable capturing the occasional larger trade, while accepting that there will longer periods of breakeven or slightly negative results when market conditions and your trading performance do not allow for these larger trades?

If you’ve proven an edge via both styles of trade management, then either will work. Pick the one that feels the best and stick with that.

Either way, if you really do have an edge you’ll profit over a series of trades.

Either way, if you don’t have an edge you’ll soon realise it through drawdown.  (NB. Ensure you have a “stop trading” drawdown limit!)

Choose one of the other management style. Neither is right or wrong. They’re just different; with the difference being primarily psychological. The benefit of multiple-part management is the ability to diversify across different psychological outcomes. With one part you’ll need to just accept periods of underperformance. 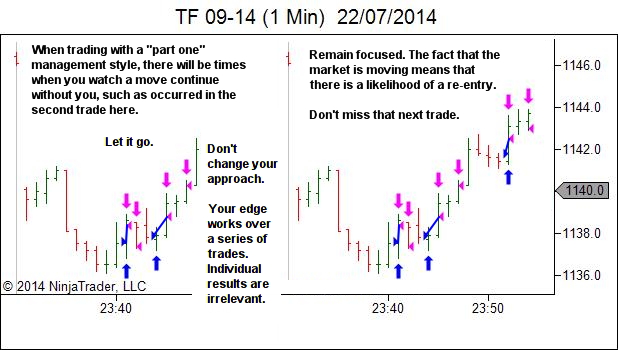 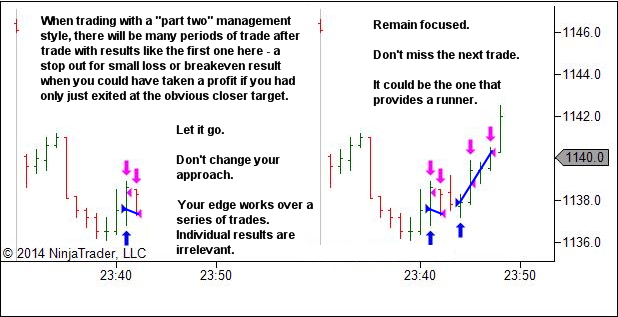 Having chosen your preferred style of trade management, your aim is then twofold:

Having achieved this increase in account size, you may well choose to continue trading with just one part. But at least you now have some choice.

All of the above is opinion only. This is just how I would personally trade a small account with one part positions. I don’t have insight into your personal needs and circumstances (financial, lifestyle, degree of skill and knowledge, mindset and risk tolerance). Hopefully though you can find something here to help you in finding the right path ahead. Again though… seriously consider remaining in a simulator environment while building your account.

Summary – it doesn’t matter which management style you choose. Both will incur psychological challenges due to underperformance. Both have the same goal – building your account to the point it allows multiple contracts. Both will achieve the goal if your edge is real. Both will fail if your edge is not real.

Now having said this, I’d like to throw a spanner in the works and suggest some other options and considerations.

We have talked a LOT over recent years about the importance of reviewing trade stats in GROUPS. And using this analysis to drive our growth and development. This simple concept here: I still believe this is the best way to monitor the health of your business and to drive improvement. Small groups, occurring regularly. With…

One of the things I love about what I do here at YTC is the opportunity to chat with other traders, at all stages of their development. My email archive provides an absolute treasure-trove of information and ideas spanning all areas of this business from strategy to peak performance to business management. I was…

“Simplicity is the ultimate sophistication.”…Leonardo da Vinci How detailed should your trading plan be? There is of course no right answer apart from whatever works best for you. Some people need detail – lots of it. Others will never need more than a single page, with anything longer simply gathering electronic dust as it sits…