This is the price move… 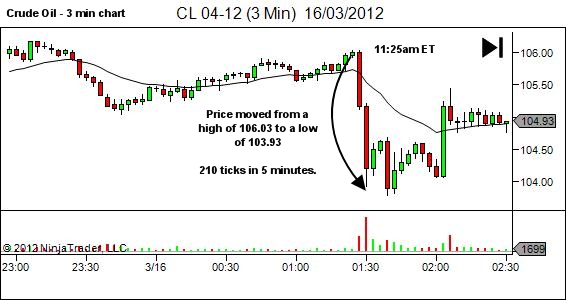 First let me address a couple of important points.

Our analysis will be based upon a 30-minute chart for S/R structure, a 3-minute chart for trend and setup and a 1-minute chart for fine-tuning, as is standard for readers of the YTC Price Action Trader. Of course, the concepts discussed can be applied on any other timeframe combination.

The following 30-minute chart shows the S/R structure leading up to the market fall. 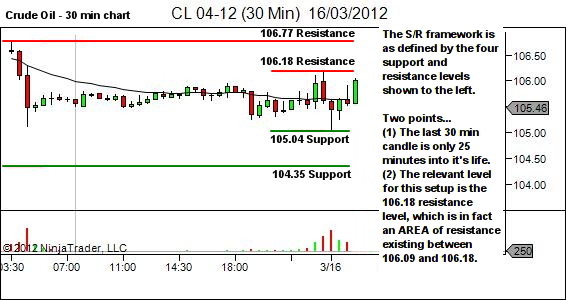 Of note is the fact that the resistance level relevant to this setup is the 106.18 level. S/R however are not really single price points; but rather they should be considered areas. Based on the 3-min trading timeframe chart which allows us more detail, this level is defined as actually being between 106.09 and 106.18.

Let’s now review the 3-minute chart to see what the price is doing leading up to the setup (01:25 chart time). 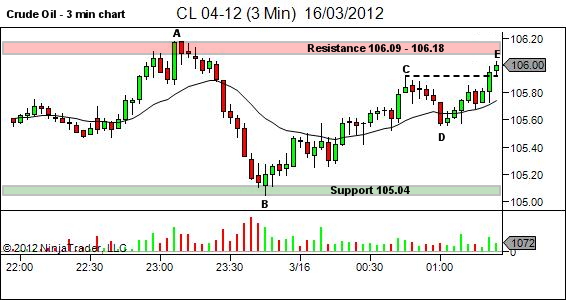 Price points A and B defined our resistance and support levels respectively. Given the single swing nature of this move A-B, the principles for trend definition in the YTC Price Action Trader have us defining the following action through C, D and E as a sideways trend, or trading range (bounded by A-B highs and lows). However it doesn’t matter if you defined the move B through E as an uptrend; the end result is the same. Price is currently carrying out a fairly weak retest of the earlier session highs at A and my rules say that a weak retest of a level such as this should be expected to hold. I will be looking for an opportunity short!  (Yes… those “hindsight bias” alarm bells should be ringing)   🙂

This is actually a really nice short setup. Price swing CD actually showed the first sign of some bearish strength (actually probably more of a surge short as some of the weak longs were stopped out). And this was followed by another weak continuation DE. The second last bar appears quite bullish, but price then stalls on bar E, right at the zeros level and just below resistance. Weak bulls will again be nervous. 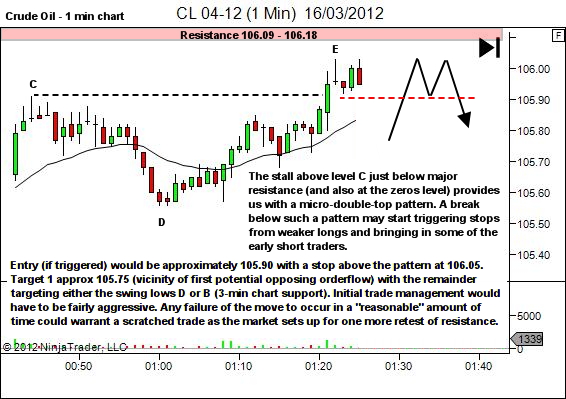 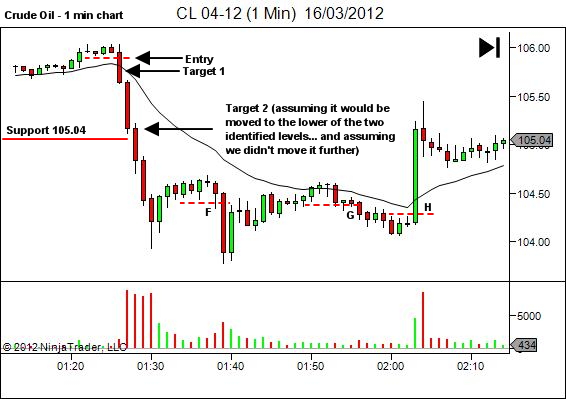 So to answer your question Ryan, yes, there is every possibility that a trader could have “accidentally” caught this move. I say accidentally because the outcome would not be a result of any skill or superior knowledge. More just luck. But then a big part of luck is just being in the right place at the right time and willing to take on some risk.

And while we have our hindsight bias helping us trade to perfection, we also would have managed shorts at F and G followed by another nice long at H.   🙂

Assuming our bias was short and we did place orders, the only remaining question would be the order type. Personally I’d most likely have a stop limit order rather than a stop market order. Depending on the way price moved it could well have jumped straight over my order without filling.

Market replay did fill the order though. It also shows about a 40 second stall just above target 2, prior to continuing through the order and then lower. Given this stall it’s unlikely I’d have moved the target order lower. In fact, I may have taken the profits 5-10 ticks higher (it’s so close why risk losing the open profits).

I love it when I read forum entries from people suggesting trading strategies along the lines of: Enter long when the RSI(14) is above 50, the stochastic (14,5,3) has crossed positive, and the Williams %R(14) is rising from the oversold area Enter short when the RSI(14) is below 50, the stochastic (14,5,3) has crossed negative,…

The market opened and settled quickly into an uptrend. It was an environment I found difficult to trade for some reason. Decision making was poor. And I just couldn't get in sync with the price movement. This was a fact that became clearly obvious after two suboptimal trades (small profit so it's all good)….

Recently I posted the following image to my YTC Facebook page:     Let’s look at this Opening Range (OR) idea in a little more detail.