Today we had three different breakout pullbacks with three different outcomes. The following charts show the trading timeframe first (one chart), followed by the lower timeframe detail (three charts, one per trade). 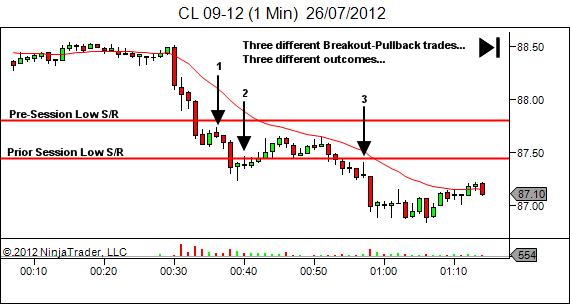 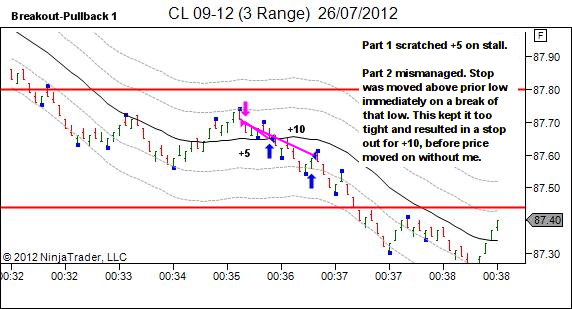 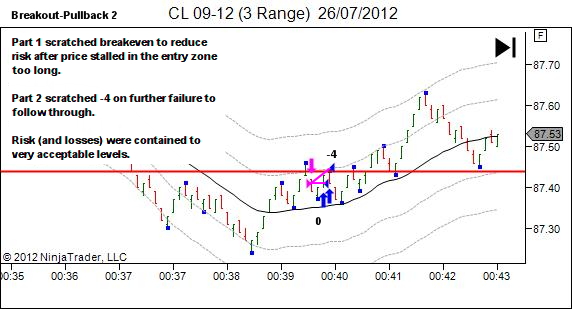 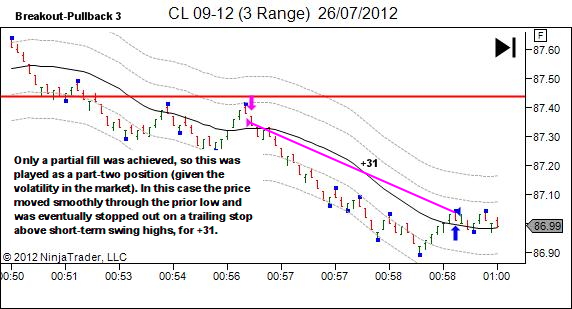 A common question (although often appearing in different forms) is "but how do I know whether they will work or not?"

But the trades set up in a strongly directional market, in a high probability structural position, and allow for tight risk control and potential profits several times the risk if the prior lows break.

You've got to take these!

Let's look at trade 3 again from a slightly different lower timeframe perspective (tick chart instead of range chart, for those not familiar with my use of the range charts and scalper channel): 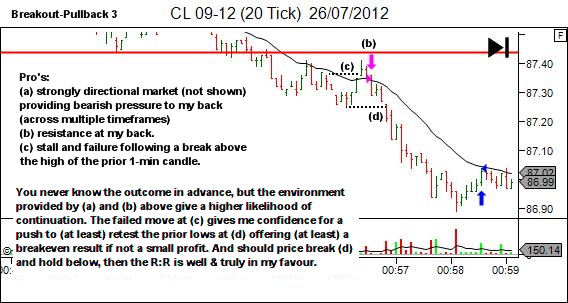 If I'm immediately wrong on the trade then the loss is within acceptable limits.

If I'm partially right and price acts to test the prior low but then fails to follow through, then I'll have taken partial profits (approx 1R) and have scratched the remainder (well I would have if achieving a full fill; with partial fill I would have just scratched).

But if I'm right (and don't stuff up the management) then I get a really nice outcome (even with a partial fill).

The market structure and price action combined to offer opportunity that is good from both a win% and win:loss size ratio perspective. You've got to take them every time. You can't know if they'll work or not. Just take them… and manage the outcome.

“Repeticio est mater studiorum.” (Repetition is the mother of all learning) …Saint Thomas Acquinas   If you’ve noticed the small size of this article, you may suspect that this article itself is NOT the Greatest Trading Book – Ever! And you’d be correct. But don’t worry; there’s a simple explanation. This article will explain…

"Everyone has a plan, 'till they get punched in the mouth"…. Mike Tyson Trading is a fight! You're stepping into the ring to face the best in the world. You'd better be ready. Because they're ready for you. Have you studied your opponent? Do you know how they move? Do you know the methods they…

This has been a favourite topic of mine throughout the last year. We explored the idea here and here, along with a bunch of other examples on social media. But then the market just keeps providing more examples. So let's look one more time. The general concept is a trap that occurs through failure…