Here's a great email question from a reader:

I'd like to get your opinion about a question I saw on a forum. To be honest I wonder if there is a proper answer but nevertheless I think this behaviour occurs often. It is a form of strong rejection at an extreme of a range leading to the other extreme. Is it just a form of self-fulfilling prophecy?

I'm curious why when a trading range is violated, then rejected and comes back into acceptance (or previous range) does it usually go to the extreme other side of the range? Just curious what would be the thinking behind what is going on behind that action. 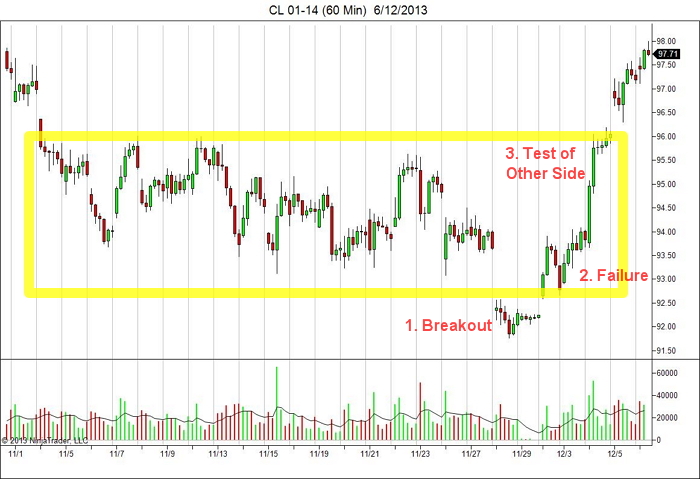 Thanks for your email. This is a great question.

A failed break of a range will move to test the other side!

This is, in my opinion, a very useful belief to have about market structure and price movement. It is a concept I rely upon in my own trading. In fact, I'll expect price to not only move to test the other side, but to also provide a serious attempt at breakout.

I have no stats to back this idea. I'm not a stats type of trader. But experience tells me this is a useful market belief. And as you'll see below it's an idea that has been in the trading world for the good part of a century, if not longer.

This is of course not the only way that a range can end. They also might show a gradual shift in sentiment as the intra-range price action moves to produce rising swing lows, compressing price against the upper range resistance in the form of an ascending triangle. Volatility compression leads to volatility expansion via an eventual break out and change to a trending environment.

There are other ways as well.

But still, the "false break and reversal to test and break the other side" is quite common.

So what's going on here?

First let me say that proper analysis of any sequence of price action should consider the context within which it occurs. If we wished to explain this particular example, we should look to higher timeframe context, macro-economic and political factors, news influence, etc, etc, etc.

Every situation is unique and wider context should be considered.

We won't do that here!

Instead, let's just look from a "model" perspective, as this will provide something useful for future application.

And from a model perspective, it's hard to go past basic Wyckoff. This is such a beautiful example of his model for an accumulation phase.

If you're not familiar with Wyckoff, I highly recommend studying his methodology. 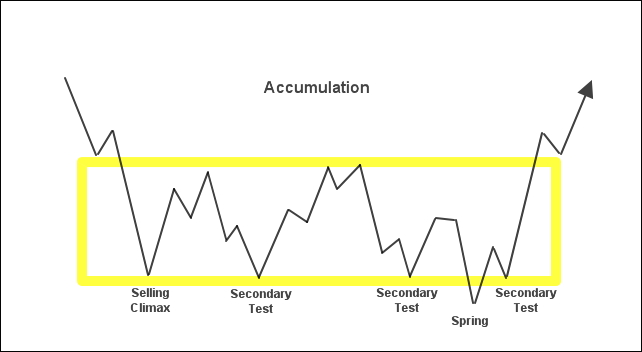 In this model, the downtrend ends with a selling climax as the professional smart money absorbs all the panicked selling, as the last of the less-informed traders or investors desperately exit their losing long positions or enter short late into the move.

The market settles into a sideways trading range. The smart money uses the range to continue to accumulate a large net-long position on any secondary tests of the range support. Any remaining supply caps price at range resistance; aided if necessary by the professionals who may offload some of their position just to hold price in the range and give the perception of a weak market.

The smart money professionals will continue to absorb supply as the range continues, until such time as they sense supply diminishing. In an ideal scenario you'll see volume reduce towards the right of the range.

Allowing price to break the lows of the range allows the professionals to shake out any of the late shorts, confirming an absence of supply, and further accumulating a net-long position at even more wholesale prices.

With an absence of supply, the market is now primed for a rally. There is very little selling pressure to hold price down. The market will usually rally with strength from the spring. A subsequent break of the highs of the range will confirm a change to a trend (mark-up) environment.

This is a very basic overview.

If you want to explore it in more detail, you'll find a lot of information online. Google "Wyckoff accumulation phase".

To start you off with an excellent article, have a look at this piece by Hank Pruden and Max von Lichtenstein.http://www.hankpruden.com/MTWyckoffSchematics.pdf

In this article the authors goes into great detail about both accumulation and distribution. The most relevant part of the article, for our discussion, involves the section on accumulation, phases C and D. Phase C being the shakeout at the bottom of the range and phase D being the subsequent rally and breakout.

I highly recommend reading the whole article. And also anything else you can find from Hank Pruden.

Enough background though… your question is "what would be the thinking behind what is going on behind that action?"

The above model provides an answer from a Wyckoff perspective. The "smart money" has used the range in order to accumulate a sizeable net-long position, absorbing all available supply.

With supply exhausted, and a final shakeout of the late shorts proving no further supply, who is left to oppose the upmove?

If you don't like the "smart money" idea, then let's look at it simply from a trader sentiment perspective.

Firstly note the strength of the rally within the range, following the failed break. An initial strong momentum move on 11/29, likely propelled by stop driven orderflow. A retest and largely inside day pause on 12/02. And then an explosive move higher on 12/03, likely again propelled by stop driven orderflow and a clear change to a momentum mindset for the traders involved in this market. Note the strength of the test of the range highs compared with previous tests of the highs on 11/06, 11/11 and 11/21.

The explosive movement higher following the failed break of range support, is easily explained by stop driven orderflow. This initial strength then attracts new demand as more and more traders and trading systems also seek entry long into the explosive momentum move. The intra-range mindset is now one of momentum, rather than reversion to the mean.

Why does it break the top?

It's a simple question of "why would anyone want to fade this strength?"

But the mindset of traders will be different this time.

Those who might have shorted at previous highs would have not only been targeting the range lows, but also operating from the perspective that there would be significant downside movement, should price break the range lows. The difference now is the fact that they've seen the downside break fail. There is no further downside potential. There is very little incentive to sell at the range highs, against the strength of a stop driven momentum move and with no real expectation of a successful break lower.

There is very little incentive to initiate a new short position at these highs.

All this is of course a generalisation, and has involved little to no consideration of the context of this particular price sequence. But hopefully it's given you something that you find useful.

All price movement is a result of the net orderflow within the market. And that orderflow is a result of the sentiment of the market participants and the conviction with which they act through buying and selling. In seeking to answer any question as to why a particular move happens in such a way, always seek to consider the thought processes of the other traders. The failed break below the range has forced a shift in sentiment. There is EVERY reason to be bullish following this break as shorts are stopped out (buy order) and new momentum longs are attracted into the market. And there is very little reason to be short at all given the proven failure of the break lower.

Thanks again for your excellent question. Hopefully something here in my amateur response has helped turn on a lightbulb. If not, seek an answer from the expert through a Google search on Wyckoff theory.

Final thought… It's fascinating that the break occurred on the day prior to the Thanksgiving holiday! I don't have stats to quantify this (as I said I'm not a stats type of guy) but if you're comfortable accepting generalisations such as "a failed break of a range will often move to test the opposite side", then here's another: "when a significant break or price extension occurs pre-holidays, watch for opportunity following the holidays if/when the move fails".

My method of establishing a bias, or an expectation for the future trend direction, is done through six basic principles of price movement, as listed in my YTC Price Action Trader ebook series. This requires prior price action as it's based partly upon analysis of previous bullish and bearish price swings and trends. So what…

I want to write a short followup to last week's article – First Pullback After Significant Structural Change. Email feedback during the week made it clear to me that some information which I'd assumed was obvious, was not actually obvious to all readers. And as with most assumptions, it's actually INCREDIBLY IMPORTANT. The article…

It can help to think of Support or Resistance (S/R) simply as a decision area. Too many traders seem to expect their S/R levels to form an impenetrable barrier guaranteed to hold and reverse price movement. Doing so will lead to much frustration and unnecessary losses. The following image is an extract from email in…

The last week was quite tough in many markets, with lots of sideways action and the occasional sharp directional moves in-between. In tough environments, it pays to be VERY patient. Don't push trades. Wait for the A-trades only; the ones which are screaming out to be taken. One that screams out to me is demonstrated…

Most of the traps I trade come from the Trading Timeframe or Lower Timeframe charts. I don't watch the higher timeframe for traps. However, I do see them from time to time. And they can provide some nice trading opportunity. Ok, "wrong" is probably a poor choice of word. The reality is that we don't…