NOTE: Not for newer traders

Active trade management requires a constant reassessment of trade potential throughout the life of a trade, in order to maximise any opportunity and minimise any risk. Here's an example (as best I can recall a couple of hours after the fact).

The tick chart shows the price flow better than a range chart, so we'll make use of that.

The trade plan is for a pullback entry for continuation short. Ideally, given my expectation of strength continuing to the downside, I was seeking a pause in the pullback abeam prior low / ledge A (scenario 1). However I was willing to accept a deeper pullback to the base of the upthrust and trap candle B (scenario 2). 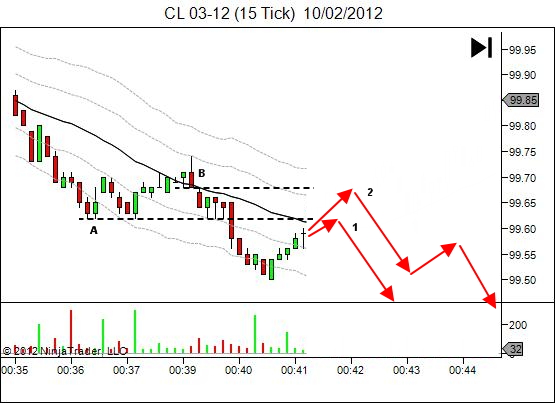 The pullback continued a little deeper than my preferred plan, but offered an entry in accordance with scenario 2 as mentioned above. The stop loss was placed two ticks above the upthrust bar (B). The initial target was just above the prior swing low (99.50 region) although if price suggests continuation it will be moved lower to allow the trend to run.

Did I ever mention that I hate scenario 2s! 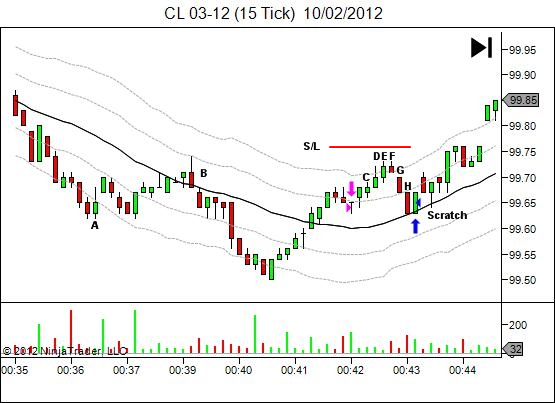 Price pauses and then continues its march higher. By bar C, having broken the swing high immediately 2-bars prior to entry, I was doubting the potential for this trade. Price movement was not acting as I would expect if it was indeed bearish. The pullback duration was taking too long. My intent was to work an exit in order to reassess.

In many cases, if a position is threatened it will warrant an immediate exit. However if I feel that orderflow may offer a way to work a better exit, then I'll seek that opportunity. In this case, price was not moving strongly against my position (more just grinding higher) and I expected there would be at least a short pop lower somewhere in the area of the upper tail of B. This would allow an exit hopefully much closer to the entry, on the first sign of stall.

The mid-close of D confirmed the potential for some bearish orderflow. The stall at E and F were encouraging, as were the continual low volumes during the rally. To be honest though, I had expected a move short to occur quicker than this. There was potential here to have got it all wrong and end up taking a full loss. At this point there is no thought of scratching as the additional risk of a full exit (3 more ticks) is outweighed 2:1 by the potential reward in a breakeven exit. I'll continue to hold and work my exit.

At G we do get the move lower. H continues the move quite nicely. In fact G and H moved faster than I had expected and again raised thoughts of the potential for continuation lower. My target remained at the original target location.

A second chance such as this will not be given much opportunity to prove itself. It either works immediately or I'm out of there!

The scratch is taken after a pause of 5-10 seconds, for a loss of -1 ticks and commission.

At this point I reassess the potential for a new trade in this setup location… quickly ruled out as price moves higher again.

I chose this trade to use as an example, as it demonstrates not only a scenario in which an active trade management process saved a full exit, but also one in which my assessment of trade potential changed a number of times (bearish at entry; uncertain and working an exit two bars later; willing to hold again for potential continuation lower by bars G&H; and exiting on failure to continue lower one bar later).

Everything worked nicely this time.

However it doesn't always do so.

This type of active management is not for everyone (and certainly not the newbies). Many prefer a passive set-and-forget approach in which they just wait for the stop or target to be hit. And that's fine. But if something like the above process appeals to you, give it a go. Be sure to track your stats though in comparing active management exits vs passive management. Ultimately, if it's not making you money, it's not worth doing!

And be patient… decision making will improve with experience and with development of a risk-aware mindset.

Late last year I released a popular series of two articles which dealt with the topic of "Winning through Losing Better". You can see them here if you missed them: Part One, Part Two. I was reminded this week of a comment from Part Two. Here's the relevant text from the article: Search for market…

Ok, not really. But the market participants have memory. And they have somewhat predictable human nature. And that is what leads to patterns in structure creating familiar outcomes. And the saying that the market doesn’t repeat, it rhymes. We saw this in a prior article: The Market Rhymes (AKA Don’t Screw Up the Second Opportunity)…

The following is a great question from YTC reader Aaron. I thought this would be worthy of entry into the blog and newsletter as it's a question which will be relevant to anyone who allows discretion in their trade management plan. And I'm really keen for anyone else to add their ideas and thoughts…