Do you remember the feeling of excitement when you first discovered candlestick patterns?

Simple textbook patterns which promised to get you into every market reversal, right near the beginning of the move.

If you’re like most of us traders, you bought a book on candlestick patterns, or scoured the internet for the best of the free candlestick information (it’s here by the way – http://www.youtube.com/user/YourTradingCoach).

You spent hours practicing – scanning through historical charts and learning the patterns until you could see them in your sleep. Surely the funds from the uninformed masses would soon be flowing into your account.

And you may have even taken great delight in showing off your new found knowledge to your non-trading partner or friends. “Look at this dark cloud cover. See how it makes price fall. And here’s a doji. And this one here is called a shooting star.”

It all seemed so simple.

Somehow, when you’re trading live at the right hand edge of the chart, the patterns are not so easy to see. They never quite look as picture perfect as they do in the textbooks.

And even when they do look perfect, and you summon up enough courage to enter, the trade just never moves like it’s meant to.

That textbook hammer, entered on the breakout of the highs, suddenly reverses to retest the lows and stop you out, before then moving north again without you.

How do I know you’ve been through this?

Well, firstly, because it’s a stage we all go through. But I also know this because a lot of traders contact me, frustrated with their lack of candlestick success. They’ve worked through my basic candlestick analysis videos and are now hoping I can share with them the secrets of ADVANCED CANDLESTICK ANALYSIS.

Usually I just reinforce some of the key concepts from the videos:

But there is more to it…

So, let’s have a look at what I call ADVANCED CANDLESTICK ANALYSIS (if there is even such a thing!!!)

Often when traders contact me seeking more information on candlesticks, they’ve made an assumption that more advanced candlestick analysis involves better (ie. more secret) patterns, or certain combinations of western technical indicators which work in conjunction with the candlestick patterns.

In both cases the assumption is false. There are no secret patterns. And there is no Holy Grail combination of western technical indicators and candlestick patterns.

These traders are seeking to add more tools or techniques to their analysis, in the hope that it can provide some certainty in the uncertain world that is the markets.

In my opinion, advanced candlestick analysis does not involve adding anything. Instead it involves seeing the patterns in a different way.

Instead of looking outside of the pattern, for additional analysis tools, look within the pattern to see the inner nature of the price movement which makes up the candlestick pattern.

Advanced analysts recognize that the candlestick patterns themselves are nothing more than labels, essentially an illusion. For these people, the patterns lose their significance and they simply observe the inner nature of price action.

We’ll discuss shortly at what I mean by looking within the patterns. But first, I expect some traders will have some resistance to this information. It seems many of us get too wrapped up in the definitions, and in finding exact patterns, as if there was something magical about the patterns. Let me try to shatter that illusion with a small example.

The chart below is 15 minute chart of GBP/USD from 28 May 09, early in the European session. It shows a beautiful hammer at the bottom of a downtrend, circled in red. Please ignore the horizontal line, as it’s simply how this charting application shows us the current price, and is not relevant to this example. 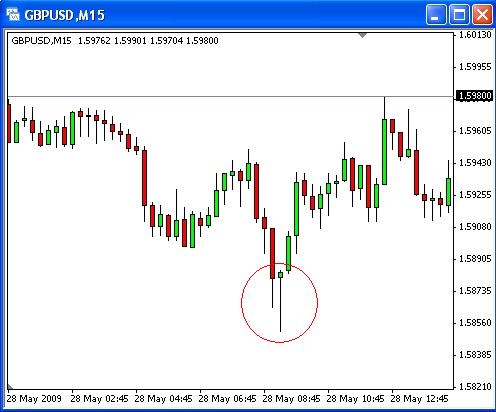 Compare that to the 5 minute chart below, showing the same currency pair, at the same time. 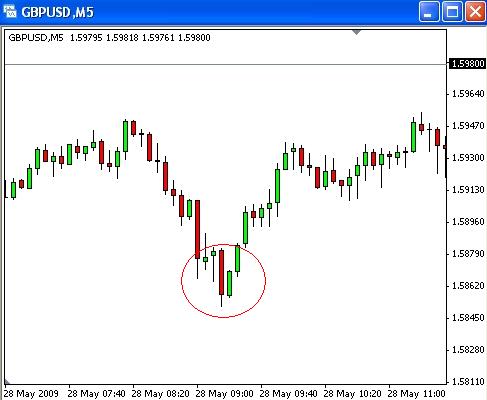 Where is the hammer on the 5 minute chart? It’s not there.

There is nothing magical about hammers, or any other reversal pattern. Traders who limit themselves to one or two strict textbook definition patterns, are not only missing a whole lot of trades, they’re missing the whole point of candlestick analysis.

What we have in these diagrams are two different patterns, both representing the same underlying price action. So, what’s the truth? Is it a hammer, or is it a harami / piercing pattern?

It’s time to remove the illusion of the patterns being some magic forecaster of future price action. The patterns are just labels to define the reversal point – illusions – they don’t actually exist as a fundamental reality of the underlying price action.

What is real then?

We’ll talk about that very shortly. First though, one more example… 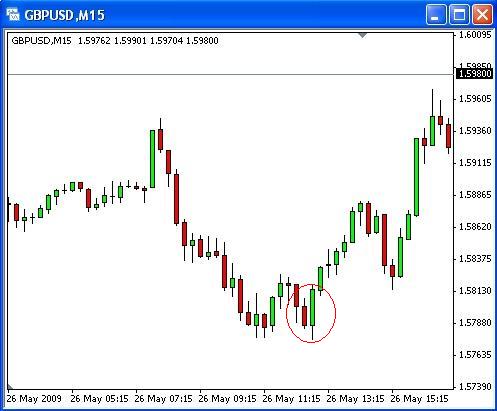 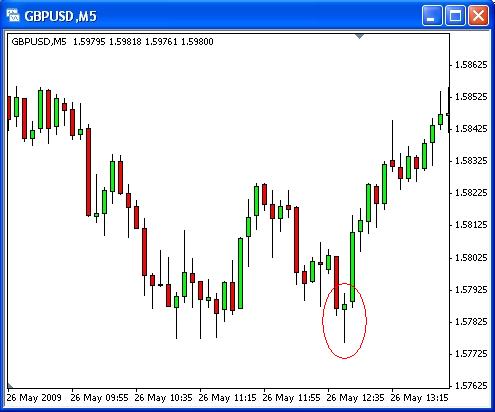 So, hopefully you can see that the reality is NOT the patterns. The patterns are just a simple visual representation of the underlying truth or reality of price action.

What is advanced candlestick analysis? What is the reality behind the candlestick patterns? What do I mean by looking beyond the patterns?

For me, advanced candlestick analysis involves reading the internal forces of supply and demand which create the candles, observing how shifts in sentiment within the price action change the balance of power between the bulls and bears, alerting you to the potential future action of traders, and therefore potential future trade opportunities.

In other words, I develop a bias for price movement. Not just whether it’s bullish or bearish, but also considering the degree of bullishness or bearishness. And then I continually reassess that bias, not only on the close of each candle, but intra-candle as well.

All market analysis is simply determining whether the new information has supported or changed your previous bias.

It may surprise some of you to know that I don’t actually trade candlestick patterns. I trade the changes in sentiment that are revealed by the underlying price action. Sometimes this produces a textbook pattern, but usually it doesn’t.

No, this doesn’t mean the candlestick videos were a lie. On the contrary, learning the patterns is a vital step towards learning the psychology of price movement. Hence my focus in the candlestick pattern video series on the sentiment or psychology of each pattern. It might be worth reviewing the videos again, in particular the part where I talk about the psychology or sentiment of each pattern. If you want to take your candlestick analysis to the next level though, I believe you need to move beyond the patterns to trading the sentiment changes themselves. The videos will provide a great starting point for this.

So, as price action unfolds, I am continually reassessing the sentiment of the market. There is unfortunately no indicator that can do this for you. It’s a skill you need to just develop over time, through practice and through asking continual questions about how price is moving. While there’s no definitive list of questions, the following will serve as examples of the type of things I’m watching:

These are just examples. Feel free to add any additional questions that work for you. The key point though is we’re simply trying to answer the following question:

Every candle is significant. Every candle provides new information. However that doesn’t mean that every candle will result in a change of your bias, or your assessment of future price action and trading opportunities. Many candles will simply indicate no change in sentiment, and therefore support your previous bias. However, constant vigilance and reassessment is essential if you want to pick up the changes before other traders.

The next article in this short series will continue the discussion on advanced candlestick analysis, stepping us through an example in which we look beyond the illusion of the candlestick pattern, to observe and understand the inner nature of price action.

If you want to try it for yourself in the meantime, why not step candle by candle through the GBP/USD, 26 May 09, 5 minute chart above, in which we have a hammer at previous support. Question every candle, asking whether or not it changes the bullish or bearish sentiment of the price action. See if you can identify a good reason to enter on the close of the hammer, apart from the fact that it looks just like a hammer you once saw in a book or video. I’ll provide my thoughts on this exact chart in the next article.

Yeah… I'm serious! Rock Paper Scissors! I know all the other trading educators are talking about poker and the lessons it provides in position sizing and trader psychology. I'd love to sound really cool as well and talk about No-Limit Hold 'em, or Aces over Kings, or all manner of other great-sounding terms. But the…

In our article last week (read it here if you missed it) we discussed the concept of the bad beat. A bad beat occurs when you correctly identify, enter and manage a valid trade setup, but are still left with a loss or missed opportunity. The fickle hand of fate cares little for your high…