Let’s wrap up this series of articles with a couple of examples. 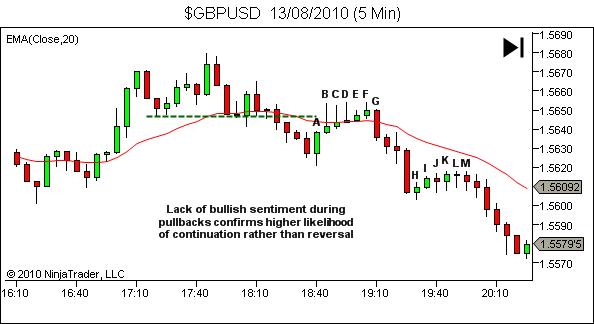 Price bar A is a high close range candle, commencing a pullback. As mentioned, our premise is for weakness in any pullback.

Weakness shows in candle B (low close bull candle) through the upper tail rejection, as it does through candles C to F which all display variations of range candles. There is no bullish or strong-bullish sentiment displayed throughout this pullback. Our premise is intact throughout the pullback, confirming a higher likelihood of trend continuation than reversal.

If our sentiment analysis was being used to identify entry signals as well, a stop entry order (sell) could be placed below the low of the pullback candles.

Strength continues in the bearish direction from candle G, once again confirming our premise of trend continuation downwards.

Candle H (mid close range candle) shows a pause in the downswing. Candle I is a high close bull candle. While considered bullish on its own it actually demonstrates a very weak bullish push when taken in the context of preceding price action. Candle I regained only a small portion of the previous large red candle. The pullback is still showing weakness, which continues through range candles J to M, before again resuming a stronger downwards extension.

Bar by bar analysis of sentiment has confirmed weakness in each pullback, confirming our premise for continuation of the trend. 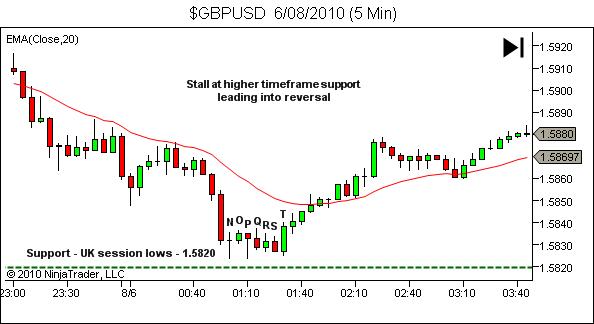 This next chart (above) shows a downtrend coming into an area of higher timeframe support.

Due to the strength of the move towards support my premise was for a break of the support level, which then fails and reverses into an uptrend.

Candle N (mid close range candle) shows the first pause in the downswing. This short-term neutral sentiment is expected coming into support, showing an increase in bullish orderflow. The premise is still intact, for a continuation lower followed by a breakout failure. Candle O (high close range candle) provides no new information. Candle P does however. While a high close range candle displays bullish-neutral sentiment in the short timeframe, considering the context we see we have now rejected a test of support on two occasions. My premise changes tentatively – expecting a test of support which is unable to breach the level, unless I see some evidence of bearish strength.

Candles Q, R and S (all range candles) fail to provide any evidence of bearish strength. The premise remains – a test of support before rallying upwards.

The rally commences on candle T which shows a high close bull candle closing above the highs of the last six candles. This is strong confirmation of bullish sentiment coming off support. Had our bar by bar analysis been used to identify trade entries, this could be our trigger.

Now, in both of the above examples, you’ll see that we only looked at price action in areas of setups. Our new method of bar-by-bar sentiment analysis not only confirmed our premise but also provided entry triggers (if you wish to use it in that manner). So far, there’s not a lot here that can’t be achieved by normal candlestick analysis. After all, both of the above setup areas can be traded through the usual candlestick pattern methods. For example, candles B, C and D in the first pullback of chart one show great shooting star candles & gravestone doji patterns, which could be used to trigger the move down. Likewise with the doji and hammer in candle N and P above, which could trigger the move upwards from support in chart two.

However, as discussed in the previous articles, the real benefit of bar by bar sentiment analysis is that it allows monitoring of sentiment throughout ALL price action, in order to confirm or alter our premise.

So, let’s see how we can use this sentiment analysis method elsewhere, away from setup areas. 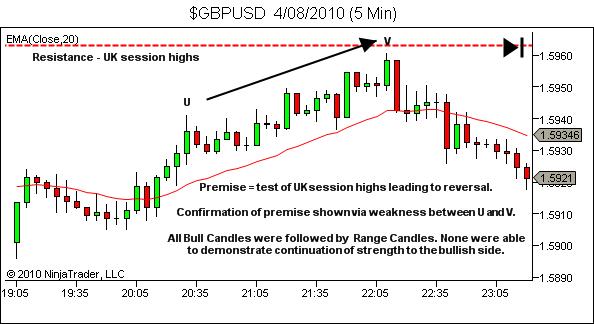 In the above chart we have a premise of continuation of our trend to the area of resistance shown via the red dashed line. A resistance area is expected to hold unless the price action shows evidence of strength on the move into resistance.

Conduct your own analysis of sentiment, bar by bar, from candle U to candle V. You’ll note that price following each bull candle was unable to carry through to close on new highs, forming a range candle on each occurrence. Bulls are not dominating the bears on this rally. There is no sign of strength sufficient to break through resistance. We would therefore be seeking trade opportunity in accordance with this premise – at a test of the resistance area.

Watch price as each bar unfolds…

Practice will allow you to gain a valuable analysis skill. One which allows you to remain in sync with the flow of sentiment, feeling the shifting balance of power between the bulls and the bears, and ensure you’re ready to strike when you see opportunity in one of your setup areas.

Maintaining context is essential for effective price action trading. And while that is true for all timeframes, it's especially so in the lower intraday timeframes where you can easily get caught up in the tick-by-tick battle between the bulls and bears. My primary tools for context are the trend structure which I view on…

Here’s some great Q&A with a YTC reader: Question: Hi Lance, I wanted to ask what do you do in a situation where price retraces just enough to scare you. I mean let’s suppose we just trade with one contract to make things more interesting. We consider setups that offer a 2:1 as R:R. You…

I’ve shared this idea a few times now over almost a decade and a half of writing YTC articles. Surprisingly, it’s not something I’ve heard discussed by other educators. I doubt I’m the only one who thinks this way. But perhaps that is what you get when you question common advice. And you should always…