The key learning point from candlestick patterns is that (assuming you’ve been taught correctly) it teaches you to read the sentiment within the pattern; how the battle between the bulls and the bears is playing out and which is the dominant force.

This concept is then applied to a dozen or so patterns. And provided the patterns are then considered within the context of the background market action, they can provide a good indicator of potential reversal.

Here’s the problem though… you only learn to apply this concept to those dozen or so patterns. If those text-book patterns don’t display on the screen, you’re lost.

A better approach is learning to read the sentiment of EVERY candle or group of candles.

We are not reliant then on fixed text-book patterns.

Let’s look at how I read the short-term sentiment of the current candle, or group of candles.

Let’s learn how to read candles in a way that I consider vastly superior to standard candlestick analysis.

The first part which we’ll cover in this article, is defining the candle based upon its Close Position.

We define a candle as a High Close, Mid Close or Low Close candle, depending on where price closes within its high to
low range. 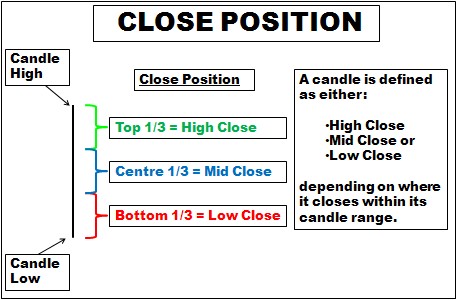 A High Close candle is one in which the closing price is within the upper third of the candle range. Examples of high close candles are demonstrated via candles (a) to (f) in the diagram below. Note that all candles close in the upper third. A high close candle displays bullish sentiment, for the period of that candle. Of course, that single candle timeframe is not sufficient data to establish a bias, and we need to consider this short-term bullishness in the context of preceding candles. We’ll do that shortly. For now, a high close candle is bullish. Note the different degrees of bullishness though within each candle. For example, comparing (a) and (b) we see that (b) was able to drive prices higher from its open, showing very little resistance from the bears, whereas (a) initially fell from its open before being able to fight its way back higher. Candle (a) is potentially a little less bullish than candle (b). All of these candles from (a) to (f) are bullish; with a small difference in degree of bullishness.

A Mid Close candle is one in which the closing price is within the middle third of the candle range. Examples of mid close candles are demonstrated via candles (g) to (l) in the diagram below. The sentiment of a mid-close candle is considered more neutral, as price has been driven both higher and lower, before closing somewhere mid range. As with the high close candle, more information will be required before we know the impact of this short-term neutral sentiment on the overall bias. Note again the slight difference in sentiment between candles. Although all are neutral, (i) for example is more on the bullish side of neutral compared with (l) which is on the bearish side of neutral. 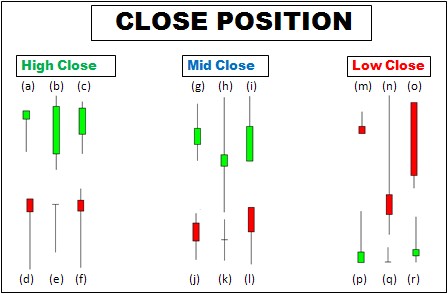 A Low Close candle is one in which the closing price is within the lower third of the candle range. Examples of low close candles are shown above as candles (m) to (r). The sentiment of these candles is bearish; although once again they need to be placed into the context of the surrounding price action in order to determine their influence on the bias. Again note the slight difference in sentiment. While all indicate bearish sentiment, candle (m), for example, was only able to achieve a narrow range, while candle (o) demonstrated significant bearish pressure which drove price down a significant distance.

Observing and classifying the candle in accordance with the Close Position, provides us with an immediate quick assessment of the sentiment of that individual candle – bullish, neutral or bearish.

Let me cherry-pick a perfect textbook example of the concept I want to discuss today. This was the opening sequence from Monday’s NQ futures, 1 minute chart: Brilliant uptrend, right? Right? No? Ok, maybe a downtrend then? My hope is that 100% of you had resistance to the idea of this being an uptrend. I…

I've written a lot about displaying patience at the open. About waiting till the bias is clear and trading conditions are favourable. But there are some situations where I don't display patience. Where I'm keen to get a trade on as soon as I can. No patience. No delays. It's game on! One of…

Last Sunday I shared the following image on YTC Facebook and Twitter. It's such a beautiful example of the benefits of journaling, I just had to expand upon this in a newsletter article. Here's the thing… Ok, I know! The markets don't always back up the very next day with a repeat of key…