Unlike most Support & Resistance traders, I prefer not to automatically enter on a breakout (although I won’t absolutely rule it out, such as when price bases before the breakout to allow a good low-risk position for a stop).

In fact, on the trading timeframe below, the pullback is not even visible. It occurs within the breakout candle. 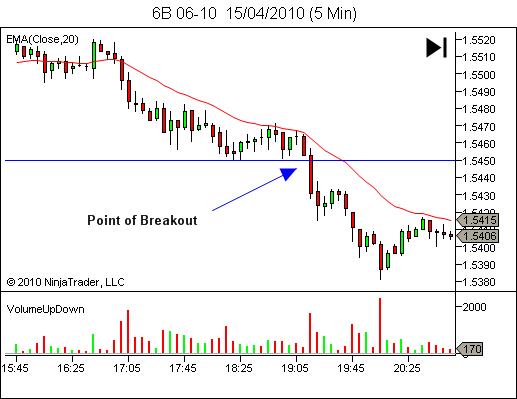 With a reasonably strong downside bias during this price action, I would expect a higher likelihood of continuation, than failure. Although I’d be prepared for both. Let’s look at the 1 min chart to fine-tune the entry. 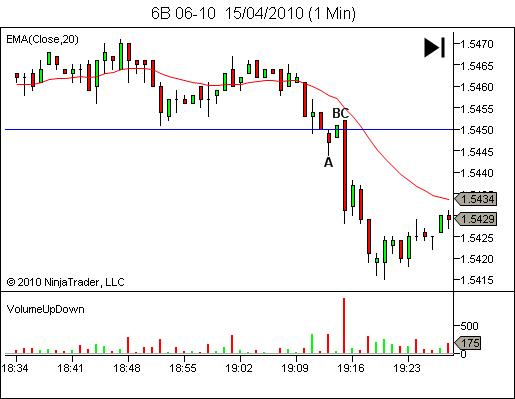 Candle A shows the point of breakout, which included some buying pressure that pushed the close up to around the candle mid-point. Candle B shows the pullback continuing, as more bulls enter in anticipation of a breakout failure. In this case they were able to close higher, but the candle range was only small, as was volume. This shows a lack of commitment from the bulls.

A break back below the low of candle A will benefit from a surge of orderflow, as many of those who were trying to catch an early entry to a breakout failure were forced to exit their longs. Entry should be no later than this point of orderflow, where the losers realize they’ve got it wrong.

The opposite scenario (breakout failure) did not eventuate this time, but you should always be ready for it. It would have required the pullback at B continuing. At some point, the breakout traders would be covering their short position at a loss, adding to the bullish orderflow. The entry point for this scenario would have been the same – at or before the losing side realizes they’ve got it wrong.

Ok, not really. But the market participants have memory. And they have somewhat predictable human nature. And that is what leads to patterns in structure creating familiar outcomes. And the saying that the market doesn’t repeat, it rhymes. We saw this in a prior article: The Market Rhymes (AKA Don’t Screw Up the Second Opportunity)…

I always attempt to be as clear as possible in my articles. It doesn't always work out though! 🙂 The following is a question from a YTC newsletter reader regarding what appears to be some contradiction between recent articles. Excerpt from Email: Contrast the article in this weeks newsletter (4/10/13), where you say you should…

The following is some recent email Q&A regarding the management of part-two of a trade (all-in scale-out), following the exit of part-one at it’s target. EMAIL: Hi, I just started demo-trading and I’ve found out that I have absolutely no idea how to manage target two. I trade GBPUSD 30min/3min/30sec. I like the idea of…