I received some interesting comments about a trade in a recent article – https://yourtradingcoach.com/trading-business/the-good-the-bad-and-the-ugly/

Here's an image from the article, showing the entry SHORT against a single wide-range bullish candle. 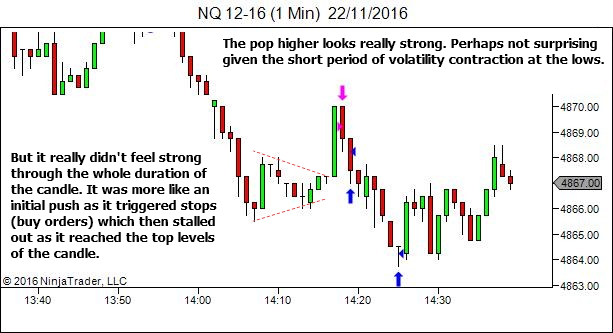 Review the original article if you want to see the context behind the trade.

For now though, I want to discuss some concerns that a few people expressed. Because I imagine there are a whole lot more who felt the same thing.

The feedback was quite varied in nature.

A couple of people really "got it". They understood that while the candle appears to show great bullish strength, the internal movement didn't necessarily suggest that was the case.

But many more expressed concern, either commenting on the post or via email. Some short extracts:

It is scary if all you see is the strong bullish candle.

I went looking for something similar over the last fortnight, so that we could work through another example. But there hasn't really been a great example since then.

But then I thought maybe this one will help.

The context is different. But the fear is much the same.

Whenever I've posted these type of trades in the past I tend to get much the same feedback – "There is no way you can enter here!", "You're stepping in front of a freight train!", "It's too scary!", "But what if it fails?"

One other thing I like about this example is that it slows the process down, with the end of the pullback occurring over 3 candles. This might make things a little easier to see.

So anyway… here it is… 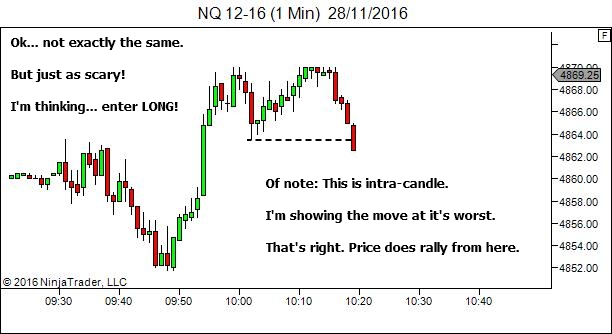 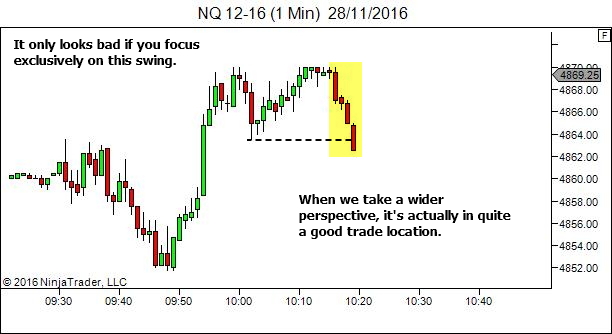 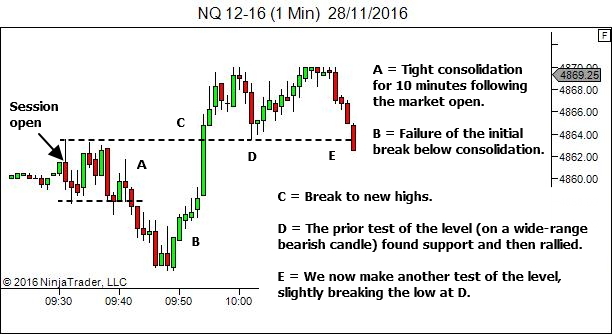 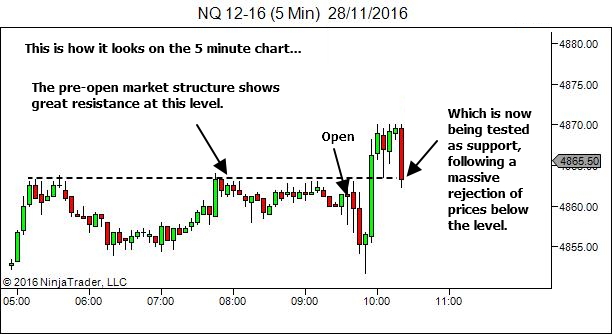 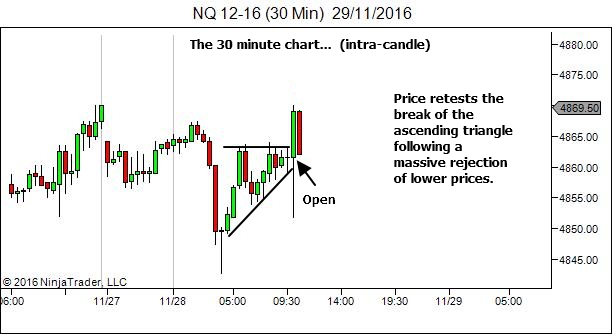 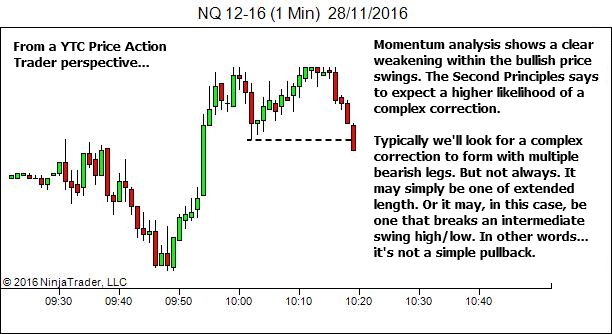 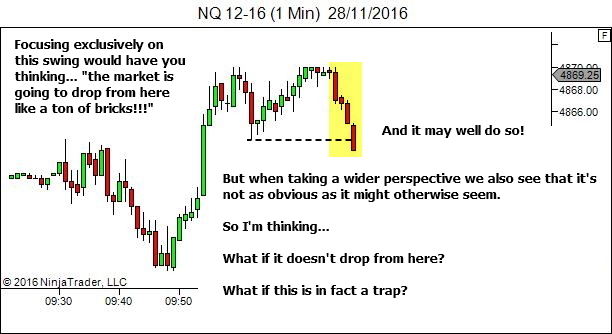 As we discussed here in these articles, until I see evidence of the break lower holding these levels, I'm expecting a break like this to fail.

It's a simple shift in mindset that makes these traps easier to enter.

Of course, it's never completely comfortable.

The move down to the level does display some bearish strength. And as readers of my ebook series will note, I'm not a fan of fading strength.

But in the case of a break of a level like this, at the end of a long move, it's the behaviour of price AFTER THE BREAK that really matters.

Will price show continued bearish strength and drop like a ton of bricks? Or will it stall and then break back higher?

As I noted earlier, I do NOT just place a limit order in a situation such as this and hope that it all works out ok.

I watch. I wait. And if I see evidence that the selling is perhaps all done, only then will I consider entry. 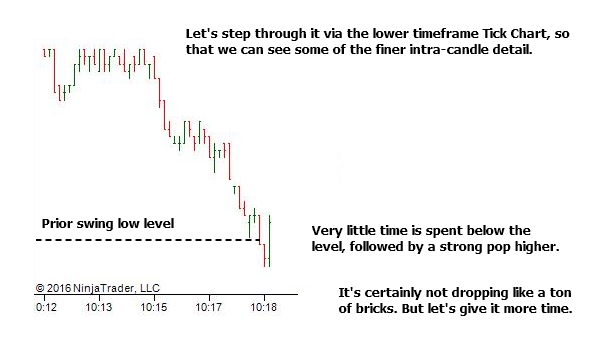 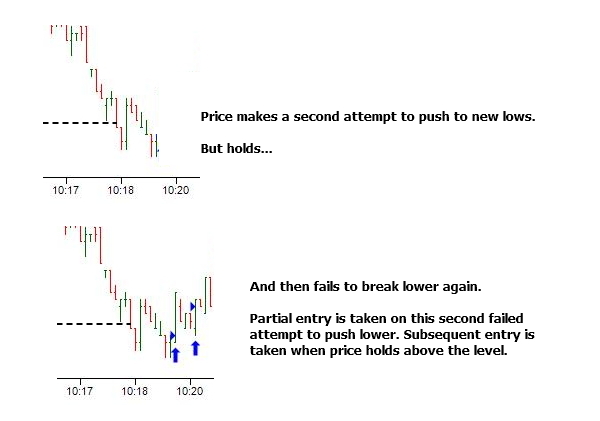 Here's the outcome:    (clearly underperforming when you see the TTF eventually break to new highs… but still it's a good trade!) 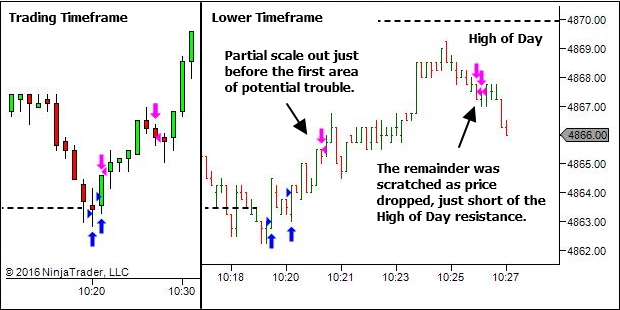 This applied with the trade two weeks ago.

And it applied with today's trade.

This is what gives me confidence to enter.

And if it fails?

So what? It's one trade.

If it loses, I'll keep the loss small.

This is not a game of certainty. The market environment is uncertain. Some trades will win. Some will lose. Work to keep the average loss smaller than the average win. 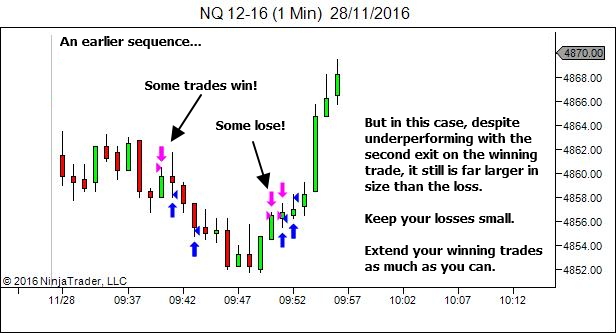 Yes, it's hard to enter against a break. Or against a strong single candle pullback.

If you're not comfortable with this, stand aside and wait for something easier. But observe them. Make decisions as you watch them live. And take notes. Study them post-session. As you gain confidence, you might want to consider sim trading a few. And eventually trying them live (small size).

But if it's in a good contextual location. And if the R:R is acceptable. Then watch. And wait. And if price shows that it's given all it's got, and appears unable to move any further in the pullback direction, then take the trade.

Keep the losses tight. And if it wins, then squeeze it for all the profits you can get.

Let me share a recent email from a YTC reader that I absolutely loved. I just would like to share with you this chart…it is amazing how the upper part is almost a perfect mirror image of the lower part… (it is Wyckoffian with 123 patterns both at Accumulation and Distribution)…offering among others 2 great…

I'm always fascinated to hear from traders who have trouble exiting a trade at the stop loss. The ones who move the stop loss further away to avoid the exit. And then move it further. And further. Until eventually, they can't take the pain any more, so they get out of the trade and destroy…

I want to write a short followup to last week's article – First Pullback After Significant Structural Change. Email feedback during the week made it clear to me that some information which I'd assumed was obvious, was not actually obvious to all readers. And as with most assumptions, it's actually INCREDIBLY IMPORTANT. The article…

This is a theme that has been constantly pushed at YTC since right at the beginning. Seeing the trade BEFORE price gets there. This ensures that trades are pre-considered. Pre-planned. Not emotional reactions to sudden price movement. How do we do this? Project your analysis forward. Given the current structure and the wider context, where…

Last week we examined an early-session opportunity in the Australian SPI futures market. See here if you missed the article: https://yourtradingcoach.com/trading-process-and-strategy/late-session-breakout-early-session-opportunity/ Over the weekend I received an email from a reader asking an excellent question. I thought I should share it with you all. Question: Hi Lance, You mentioned that there were 2 opportunities…