I've received some requests for another example. And two people asked to see what I'm looking at on the lower timeframe.

So let's look at a couple more trades.

First though, we've discussed this idea a few times over the last six months or so. If you want to review some of the earlier material, try some of the following. There may be more if you search through the archives as well.

For one more example, let's look to the emini Russell (TF) on yesterday's session, Tuesday 26th of August. 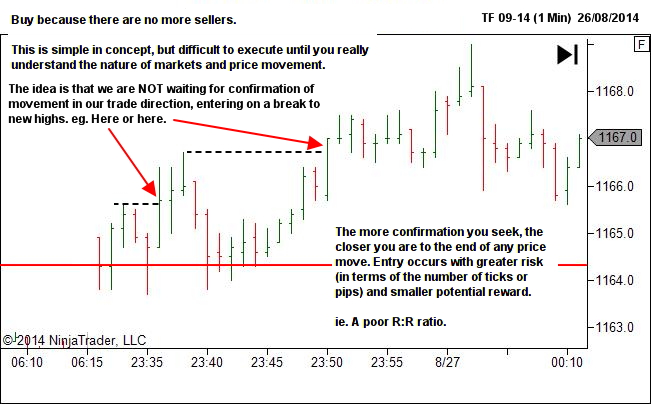 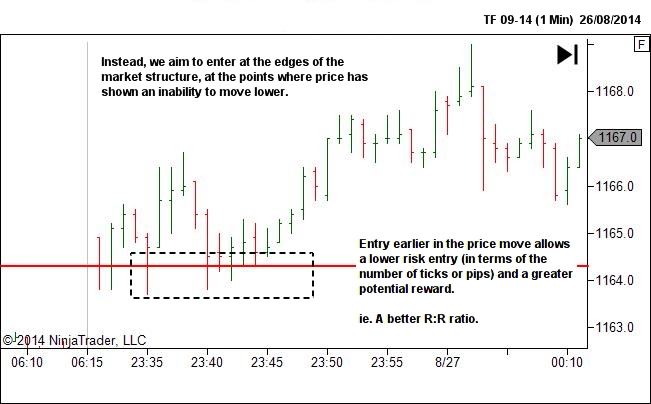 Let's back up to the start of the session and get some context from a slightly higher 5-Minute timeframe. 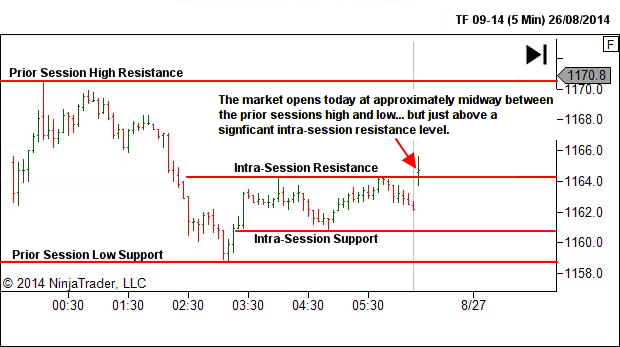 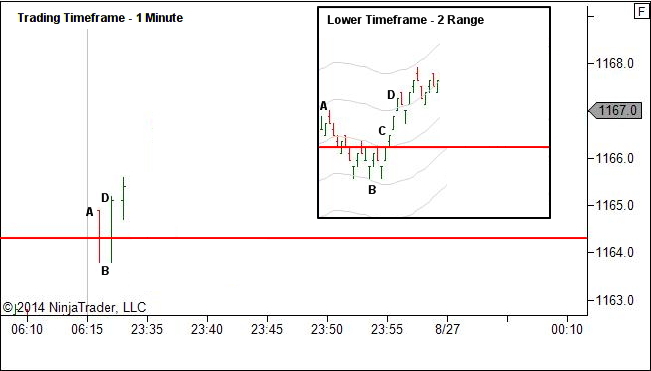 Price opened above the S/R level at point A before dropping below the level at point B.  Note on the lower timeframe chart how price stalls and forms a block pattern. There is buying here opposing the initial bearish drive.

The S/R level has held. The opening range has broken to the upside. The bias is up. We are looking for a pullback entry if the trend continues driving higher (First Principle) or perhaps a retest of the S/R level if no trend develops yet (Fifth or Sixth Principle). 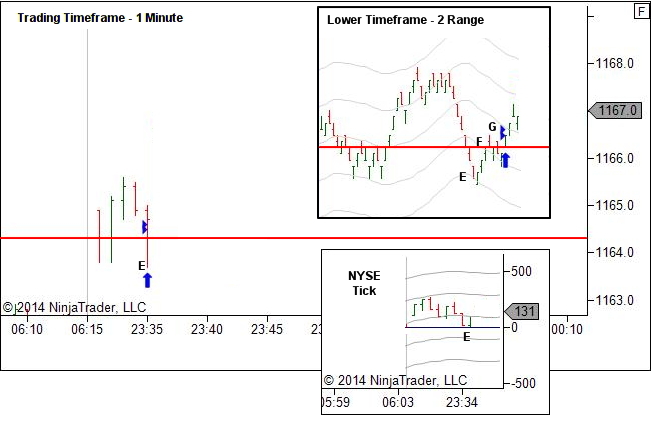 The trading timeframe stalls and price drops back to the S/R level, breaking to new session lows at point E.

Behaviour following the break will provide clues as to the next direction.

If my bullish bias is no longer valid then I should see bearish strength in both price and NYSE Tick. Price should follow through to even lower levels, holding below the S/R level and the prior session low. And the NYSE Tick should show move below zero.

This does not occur though. The break only moves one tick below prior lows. And the NYSE Tick, while trending downwards, is actually doing so very slowly and still holding above zero. There are NO signs of bearish strength.

Looking at the lower timeframe, price moves from E to again form a short-term stall at F before then breaking higher at G. This is the entry point.

I bought because there were no more sellers. I bought because price could not move lower. Neither price nor the NYSE Tick showed bearish strength following the break of S/R and session lows. The bias was still up.

My thought process… "We have a break of S/R and session lows against my bias"… "Is there any bearish strength in price? No the break has not continued lower and is holding at the S/R level"… "Is there any bearish strength in the Tick? No, it's holding above zero"… "I'll buy on a break back above the lower timeframe stall region. Risk is low and potential reward is much larger." 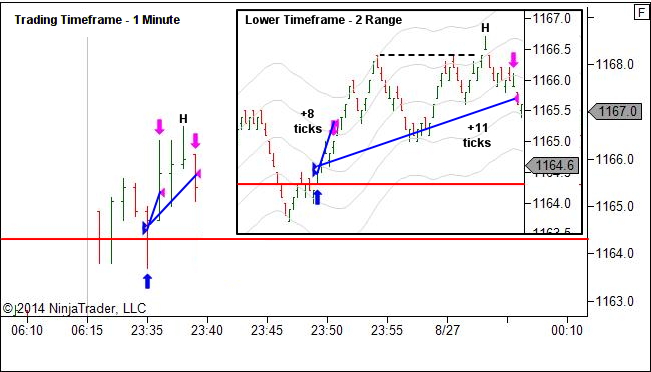 The chart above shows the outcome of the trade. Part one was exited just short of current session highs. Part two was exited via a trailing stop after the break to H failed to hold and price broke the low of the TTF price bar.

We look now for the next pullback entry. 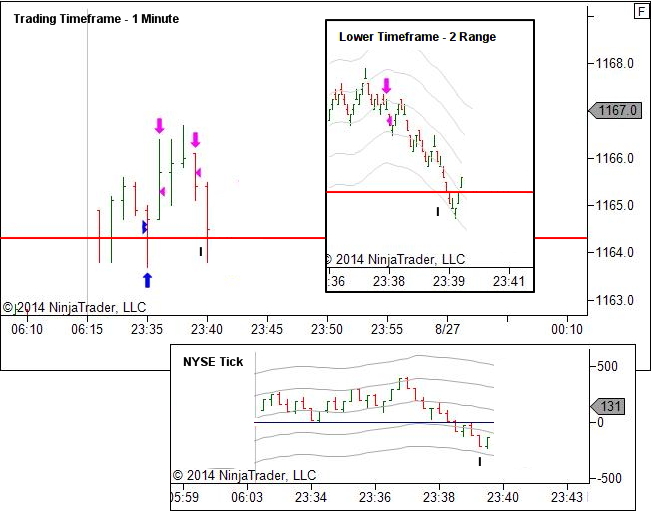 As shown above though, price pulls back further than expected, providing us with another Break of S/R at point I.

Note how the NYSE Tick is trending down. Although it's not at very low absolute values, it has clearly moved below the initial levels held during the first seven minutes of the session.

There is potential bearish strength here – from both price and Tick.

We wait to see the following price action. 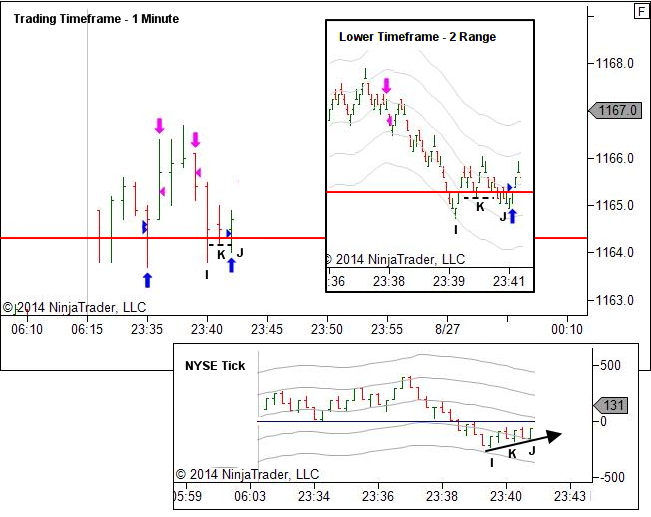 As we see above, the potential bearish strength at point I did not lead to any further follow through.

Price stalled again at the S/R level (point K) before breaking below that level at J.

This new break is interesting. It provides a further opportunity to test for any bearish strength.

Entry is taken LONG as the break at J fails. 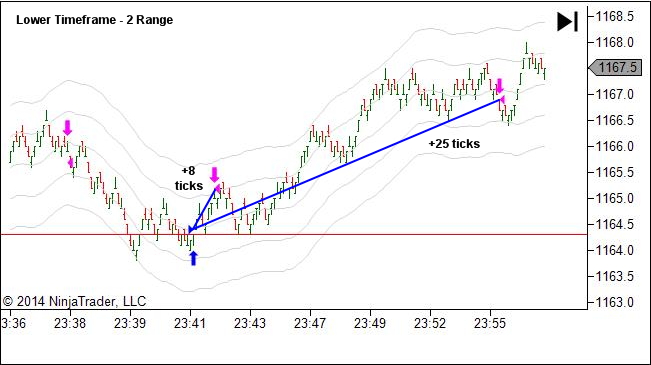 The above two charts show the outcome.

Part one was a lower timeframe scalp. Part two was held, exiting with a trailing stop on the second failure of trading timeframe bars (and occurring just a few minutes before a news release).

As mentioned above, the concept is simple. But execution is not initially easy and it takes some practice.

In both cases we had price breaking against our bias. Trade one broke to a new session low. Trade two moved down with potential bearish strength before stalling and then breaking that stall.

We look to the behaviour following these breaks against our bias. In both cases there was NO sign of further follow through in price. And there was NO evidence of bearish strength in the NYSE Tick.

No bearish strength following a break against our bias.

How did I know they would work? I didn't. You never do. But the risk is low and the potential reward is much greater. That's a trade I want to take every time – a failed break against my bias with good R:R.

Welcome back to another installment of support and resistance. The main chart features that I’m looking for in identifying support and resistance areas are the swing highs and lows, and areas of congestion. These have been covered in previous articles. If you haven’t seen them, please review them first: 1 – Support and Resistance –…

I came across a great quote during the week, which has led to an unplanned continuation of our recent theme on self-deception.  Original articles: https://yourtradingcoach.com/trading-process-and-strategy/a-new-market-model-the-market-is-a-self-deception-mechanism-part-1-of-2/ https://yourtradingcoach.com/trading-process-and-strategy/a-new-market-model-the-market-as-a-self-deception-mechanism-part-2-of-2/ The quote: “There are two ways to be fooled: One is to believe what isn’t so; the other is to refuse to believe what is so.” …Søren Kierkegaard There…