From time to time I receive a question at www.YourTradingCoach.com asking the winning percentages, or accuracy rates, for each of the individual candlestick patterns.

It’s a reasonable question. The trader is hoping that by establishing the probabilities of success or failure, they can then focus more on the higher probability patterns and minimise their exposure to losses.

In fact, I remember wondering this myself when I first learnt the various candlestick patterns.

The simple answer is that I don’t have any ‘percentage success rate’ figures which I can share.

However, the more accurate answer is a little more complicated.

Essentially, I believe the question is wrong, and any winning percentage figures that you may obtain through other sources have questionable value.

Let’s look at some of the factors which I believe render the data useless.

(1) Past samples of data are not necessarily representative of future samples of data. Of course, any fan of mechanical systems and backtesting may disagree with this, which is fine (the remainder of the factors discussed below should be sufficient to convince you that any published success rates are worthless)

This is a huge topic, certainly worthy of a full article on its own. For now though, let’s just consider this. Although the sample sizes used in producing these statistics are usually in the thousands, there will be significant variability in winning percentages between subsets of the sample. Break the sample into subsets of twenty trades, for example. All results will vary somewhere between the worst group of 20 and the best group of 20. And typically, this will be quite a range of results.

The reality of trading is that your first live sample of 20 trades for each pattern is potentially going to be worse than the average figure. Hopefully not at the lower end of the range, but certainly there’s a good likelihood of worse than average

I don’t know of many novice traders (actually, none) who would be willing to continue testing the concept beyond 20 trades, when results are not matching what was (in their opinion) promised.

The nature of the market is ‘uncertainty’. The historical probability of pattern success is unlikely to match the future probability. If you want to use published win percentage results, plan for worse performance in your live trading.

(2) What rules were used in defining the patterns? Although most sources use similar definitions, there are at times slight variations.

If your candle definitions do not match those used by the team who compiled the winning percentages, then the reported percentages will not be representative of your patterns. If you use any published figures, be sure that they also share the exact definition they used for each pattern. Most studies don’t appear to do this.

(3) Did the entry have to be triggered for the pattern to be included in the sample, or were all patterns considered, whether triggered or not?

If it had to be triggered in order to be included in the sample data, where did they define the entry? Did they use the closing price of the pattern? Did they use the open of the following candle (which may vary from the closing price if the market or timeframe often gaps)? Did they use a breakout of the pattern high/low? If they did use a breakout, was the entry triggered as soon as price broke the level, or on a close beyond the level, or on a breakout of the candle which closed beyond the level. All these different entry techniques will vary the results.

If we look at the following diagram, you can see that different entry methods result in different outcomes. 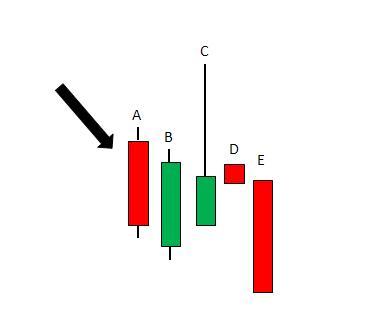 In this example, candles A and B represent a piercing pattern at the bottom of a downtrend.

If the entry was defined as the open of candle C, or the breakout above either of candles A or B, then the pattern was triggered and was therefore part of the sample set, most likely being classified as one of the losers.

However, if the entry is triggered by a close above the highs of either candles A or B, then this pattern never triggered. It played no part in the sample, and did not influence the statistics in any way.

So, if you’re going to make reference to candlestick pattern winning percentages, ensure the study you refer to clearly outlines their entry methodology, and be sure that it matches your own. Otherwise, the value of the data is questionable.

(4) What criteria were used to classify each pattern as either a winner or a loser?

Did they simply look at the next candle, basing success or failure on whether that candle closed in the direction of the trade or not? Of did they take it after two candles? Or four? Or did they seek to target a certain multiple of the pattern risk? Or did they trail a stop some percentage of ATR? Or (add any one of a million other possible exit strategies)?

As we discovered in the Exit Strategy videos (http://www.youtube.com/playlist?list=PL20078FA00249E5A2), the exit strategy used has great influence on the results of the pattern.

If we look at the following diagram, you can see that different exit methods result in different outcomes. 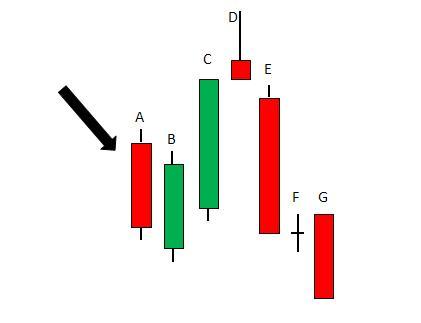 Once again, candles A and B represent a piercing pattern at the bottom of a downtrend. If the winning patterns were determined simply by the next candle following through to a profit (in this case candle C which closes above both A and B), then the pattern is classified as a win.

If the winning patterns are determined by a profit equal to the risk level (1R), then the target would have been hit on candle D. Another winner!

However, if any other criteria were used, it is likely that this pattern would be considered a loser, as candles D through G continued the downtrend, breaking below the lows of the piercing pattern.

(6) For intraday timeframes (if you can find a study which publishes pattern success rates on these timeframes) did they factor in the impact of economic or other fundamental events, or did they filter these out somehow? As an example, a study into the percentage success rates of candlestick patterns, on intra-day forex timeframes, will need to consider how to manage patterns occurring prior to the release of potentially highly-volatile news events such as the Non-Farm Payroll figures.

Without filtering out these occurrences, the data could be corrupted due to the influence of these market-changing events.

(7) Most importantly, how did they consider the context of the pattern? You’ll find most sources of pattern win percentages don’t factor this in at all, despite it being essential.

Both are valid shooting star patterns.

The first occurs within the context of a downtrend, at the top of a pullback, meaning we have the longer term bearish trend to our backs, helping the trade. You’ll notice as well that the shooting star broke above the swing high which occurred seven candles prior. This would have drawn in a lot of breakout traders, hoping to catch the early reversal. These traders are now quite a bit stressed, seeing a shooting star develop, and will likely exit their positions on the break of the shooting star candle, adding to the bearish orderflow. This is a good, higher probability pattern.

The second shooting star occurs within the context of a strong and well established uptrend. While it’s occurred a large distance above the moving average and a short entry may well be taken in anticipation of a scalp move back to the MA (which didn’t work in this case), there’s just no way it’s a high odds pattern when fighting this trend with no other evidence of prior resistance at this level. Trades such as this, when extended far from the MA, can offer a great reward:risk ratio when they work out. But this comes at the cost of a lower winning percentage.

Not all patterns are equal, just because their name is the same!

Ok, so let’s wrap it up, cause this article is starting to become way too long…

Forget percentage win rates for candlestick patterns – that’s not how the market works.

Every occurrence of a pattern is a unique event and should be assessed for potential profitability by examining the context within which the pattern occurs.

The only cause of price movement is order flow. The success or failure of any pattern is dependent on it’s ability to align you with that order flow.

So, look at where the pattern is occurring within the market structure. Will this pattern likely trigger a flood of orders from other traders, such as the first shooting star pattern above which will likely bring a wave of bearish orderflow as the trapped longs scramble for an exit, and the bears enter short on resumption of the downtrend.

That’s how patterns should be traded.

Not with reference to a ranking of candlestick pattern percentage win rates.

But with consideration of the orderflow, unique to that occurrence of the pattern. It’s all about orderflow. Consider where the pattern exists in the structure, and how that will influence other traders decisions.

Only then can you determine whether or not each individual candlestick pattern provides sufficient profit potential to justify the risk.

On Monday, prior to the market open, I shared the following YTC article via social media – https://yourtradingcoach.com/trading-process-and-strategy/patience-at-the-open/ The title of the article is "Patience at the Open". And that pretty much sums up my intent in sending out that link. Simply trying to slow down the excitement and stop you jumping into the…

REFERENCE: Definition of a sideways trend – Vol 2, Ch 3, Pages 99-102 Not all trade setups are equal. You need to collect and review your stats to determine which setups provide your A+ MUST-NOT-MISS potential opportunity of the day. For me, the first pullback in a NEW directional trend is one of these…

Recent articles on my session review process mentioned the use of a market replay feature. I’ve been asked for some information on this tool. Not surprising really – it’s something that most forex traders will not have experienced. Market replay is a feature that has appeared on many futures platforms in recent years. It allows…

I was chatting to another trader this morning about exits, and thought it might be time to share my understanding of ‘the basics’ of exit strategy and exit management. It really is an area of trading that gets very little attention compared to the other end of the trade – the entry. Go into any…