Unless you’re comfortable scalping within such a low-volatility environment, your best game plan is often to just stand aside until signs of failure.

Of course, this then raises the obvious question… is there any way we can anticipate the end of the grind?

One way is through watching for a climactic break above the upper channel line. To a novice this will look like strength, but like all climactic reversal patterns the failure of the breakout can reveal hidden underlying weakness. The last of the bulls have bought and there is insufficient buying pressure to continue the rally. 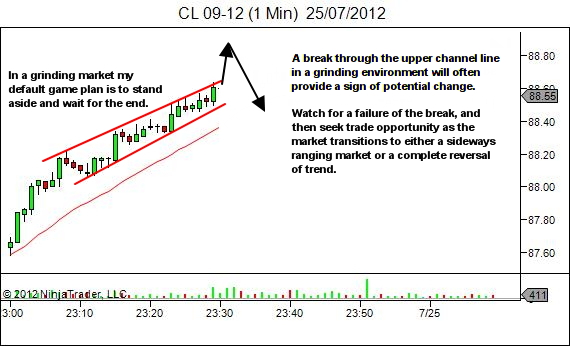 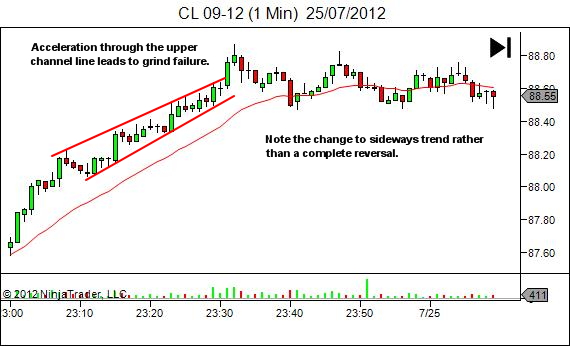 Note as well that this chart offers a great example of the fact that a “reversal” pattern does not necessarily reverse price. In this case price was simply capped at the climactic break highs, which now formed resistance. Yes, “reversal pattern” is a terrible name. But we’re stuck with it as it’s become a standard industry term. Always remain aware though of the fact that a reversal pattern is not a guarantee of reversal, but rather just an indication of a change in the supply/demand relationship within the market. It may reverse. It may range sideways. It may just temporarily pause before continuing higher.

In previous articles I mentioned that my analysis involves monitoring price action, in order to gain an insight into the short term sentiment of the market. Determining who is in control at that time – the bulls or the bears. And assessing how they’re likely to respond to changes in the market. I thought today…

Take note of the way that price approaches an S/R level. The more that price has to stretch to reach it, the better. This is a time to FOCUS. Because if this move stalls, unable to attract sufficient buying to continue higher, it can potentially set up a very nice TST/BOF trade for reversion to…

Let’s do a quick followup to the recent article on Layered Levels of Support or Resistance. Because there was an email response that I think is worth sharing. – – – Email: Lance, you’re a legend. Your timing is perfect. I’ve been trying to trade off major daily levels (prior days highs and lows, overnight…

Here’s a concept that is simple and repeatable. I shared this post on social media just before the open on Monday: And then this post on Tuesday, after the markets were kind enough to offer us a brilliant example of the concept in action: As I said at the start – it’s simple. And repeatable….

The path from entry to profit target is rarely a straight line. Especially when market structure gets in the way. In today's example we have an area of resistance, right in the way of our trade. Given the potential for some reaction off this area of resistance, we have two options. We could hold…