When discussing climactic reversals with newer traders, I find the most common question is where to enter.

After all, it can feel very much like the commonly quoted statements of ‘jumping in front of a train’ or ‘trying to catch a falling knife’.

The light blue shaded area at the top of the GBP/USD chart was an area of major resistance between 1.5670 and 1.5680, defined prior to the session. This area was previous day support which became resistance early today around the European open, rejecting prices quite strongly.

As seen on the above chart, price drove quite strongly upwards from the US equities open (00:30 my time, 08:30 ET). You’ll note the candle ranges increasing as price accelerates, along with increasing volume. Classic signs of a climactic reversal opportunity!

So, where is the best entry opportunity?

Let’s look at a lower timeframe chart to get a bit more detail. 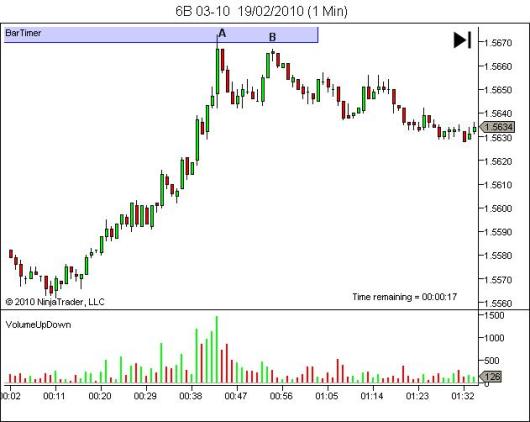 Candle A is where price penetrates the higher timeframe resistance. There is a great entry opportunity here, although I never recommend this type of anticipatory entry for the newbies.

While this type of entry has lower winning percentage, it is a trade that often has an exceptional reward:risk ratio when it comes off, allowing you to get in very close to the top.

Reminder: only when the climactic move goes into S/R, only when it stalls, only if you’re comfortable with the risk, and ONLY if you’re more experienced.

The BETTER ENTRY though is at candle B.

Wait for a retest, as occurred in this case eleven minutes later. Sure, they don’t always happen. That’s fine – move on to the next opportunity. But when there is a retest it usually provides a higher probability trade, still often with low risk.

You’ll see in this case we have a lower volume rally and stall up to point B. The failure of price to continue higher gives us an entry, as price breaks back below the high candle (ie. the low of candle B), with a stop placed either above B or A.

(Entry in this case would have got you in right near the top of the session. Unfortunately we only know that in hindsight. This particular setup occurred 5 minutes before the release of the US Philly Fed Manufacturing Index, so the best option was simply a short trade with a time-based stop prior to the economic release.)

Even better is when candle B actually breaches the highs of A and then fails. These are my favorite. The extra surge of orderflow as the breakout traders exit their positions helps give it a good push down.

So, if you have a climactic reversal into support or resistance, don’t stress about getting in right at the point of exhaustion. Wait for a retest.

Although demonstrated on 3 and 1 minute charts here, the concept applies on any timeframes. A climactic, accelerating move on high volume right into a higher timeframe area of support or resistance – love it!

Your trading timeframe, market and strategy MUST be matched with who you are as a person. Until it does, I believe it’s impossible for you to achieve consistent success. This is discussed below in a great email exchange with one of the YTC readers… Email: Hi Lance, I actually read the three parts of “The…

I received an email during the last week seeking some clarification about a prior series of articles. I thought it best that I share this with you all, as my experience shows that if I’ve failed to adequately explain a concept to one person then there are likely many others who didn’t get the message…