or… Why I held this trade drawdown longer than I usually would!

On Monday I entered a PB short in expectation of a downtrend continuing lower. 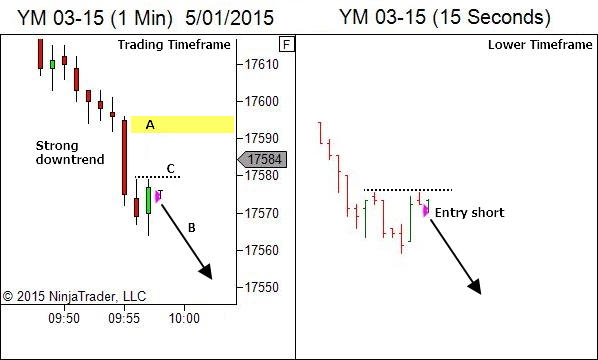 By far the best entry area would occur on a weak pullback to the shaded region (A).

And the last Trading-Timeframe (TTF) green candle certainly makes it seem like that's a possibility.

But the Lower Timeframe (LTF) stalled and offered a double top entry at short-term resistance, so I entered a position as I didn't want to miss the chance of strong continuation lower (B).

The plan was for an immediate reduction of risk should price break the short-term ledge (C) with a stop for the remainder a few ticks higher. I'd then seek another entry opportunity higher in the vicinity of A. 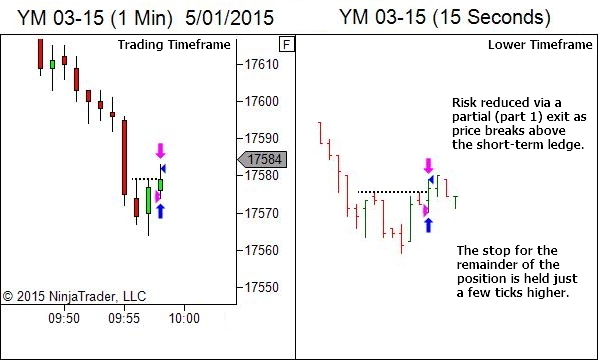 As we can see above, price pushed through the short-term resistance barrier leading to a scratching of half the position.

My expectation was that price would continue higher stopping out the remainder of the position just two ticks above the current high point.

But then the market stalled. 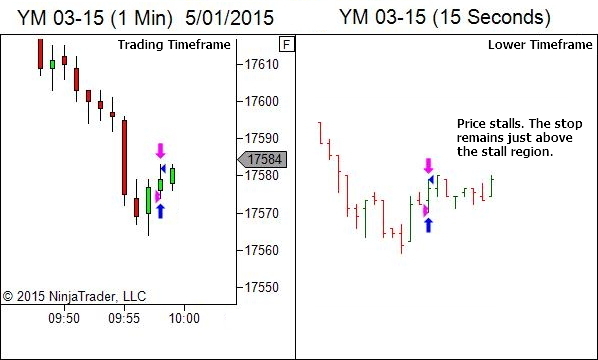 I held the position through the stall. 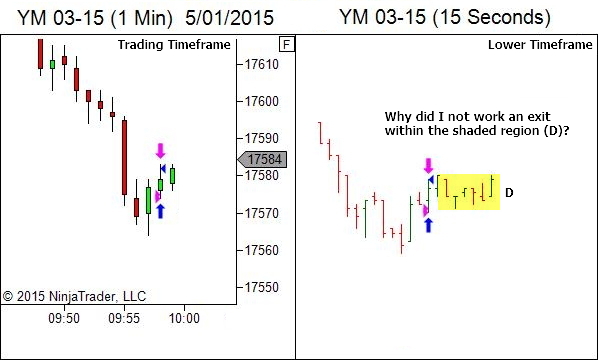 In a stall such as this my concern is always whether or not I should be working an exit.

The shaded region (D) offered good opportunity to scale out the remainder of the position for a much reduced loss.

Normally, looking just at the TTF and LTF segments above, I'd suggest that I would work an exit in this case as price does suggest a good chance of further movement higher.

But I didn't this time.

There was one contextual issue that kept me confident of continuation lower, leading to a decision to hold the position open.

Let's look at the context and discuss the decision making involved in holding this trade.

The above chart segments show how the market looks to anyone viewing a 30 min, 15 min or 5 min chart.

The market opened this day just above the prior day's low and then smashed lower with strength.

No matter which of these timeframes a trader is observing, the market is looking particularly bearish. The same would apply on 60 min charts. And even the daily.

But what really led to my decision to hold was the time at which the stall was occurring. 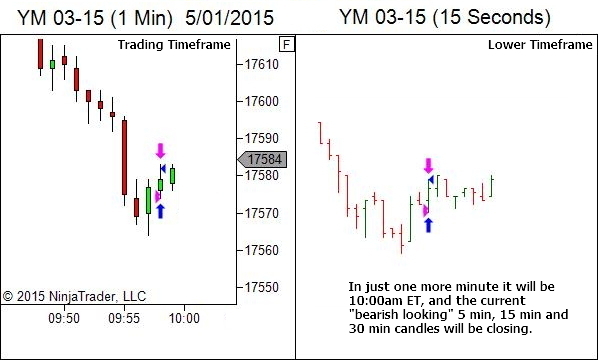 There were no scheduled news events this day. But it was only one minute from the closing time for a whole bunch of candles.

There is a good likelihood that any standard retail trader who makes a trading decision at the close of these candles (or just before or after), will be making a sell decision.

There was great potential for at least a short bearish surge of orderflow, given the context provided by both price and time, if the market can hold out just a little longer.

The reward/risk changes continuously throughout the duration of a trade. With my target set at say +15 from initial entry and the stop at -10, the initial R:R is 1.5 to 1.

But at the midpoint of the stall region, say at a drawdown of 5 ticks, the decision then is one of the following: 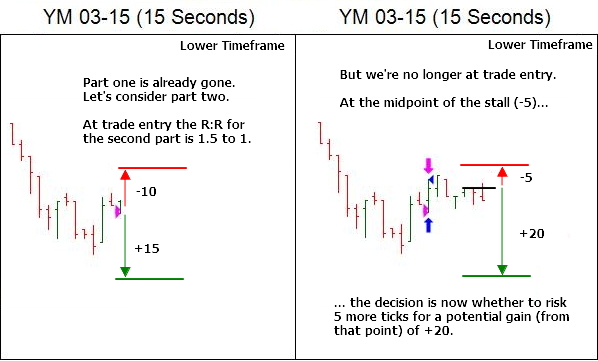 Should I just work an exit and take the additional 5 tick loss?

Or… given that my analysis suggests a reasonable chance of continuation lower, should I hold and risk a further 5 tick loss for a potential +20 gain (from that current position)?

As it was, there was no need to wait another minute, as the bearish move commenced in that final minute before the 10:00 candle close.

Here's the outcome of the trade. 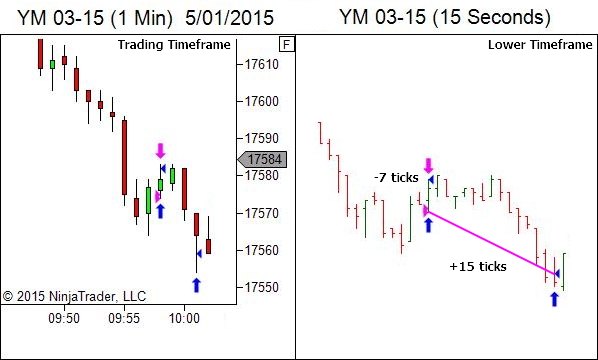 It's certainly not an exciting outlier profit.

Rather, it's just one of the many trades that end up producing either a small win or small loss. In this case a win.

Had the remainder of the position stopped out on a pop higher, I would be absolutely fine with that. I'd simply then seek the next trade opportunity, perhaps just a bit higher. And there would likely have been nothing worthy of a YTC article.

It was an assessment made through considering the risk and reward within the context of my ever-evolving market analysis.

The only possible improvements… ideally I should be looking for some way to get the full position back on. I just couldn't get anything I liked in this case. It wasn't to be.

Trade management is not about fixed rules.

Trade management is the art of balancing risk and potential reward within the context of our market analysis.

And in doing so, our decision making needs to also consider the time at which the trade is occurring, in addition to the usual price considerations.

Last week we discussed one of my current favourite plays for the first 30-60 minutes of the session – targeting the overnight high (ONH) or overnight low (ONL). You can review last week's discussion here. Just a few hours after sending out that email the market opened again. And the same concept played out…

The key to early recognition of potential change in structure is in observing and identifying "SOMETHING DIFFERENT". I absolutely love this example which has been building now since the beginning of the year. This does not mean that the uptrend will end. It's just a warning sign. A clue that the sentiment driving the…