Projection refers to the distance with which a price extension projects past the previous swing high (in an uptrend) or swing low (in a downtrend). 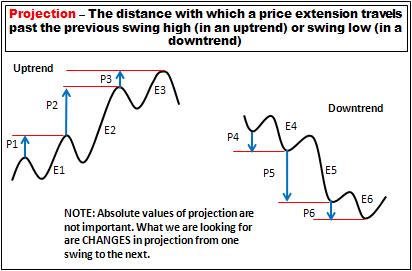 The important information is not so much the distance, but changes when comparing one projection with the next.

Note the increased projection of E2 (P2) when compared with E1 (P1). Extension E2 projects much further than E1 did, indicating greater strength within the trend.

P3 is then much shorter than P2, indicating weakness developing with the trend.

The downtrend shows similar information. Projection P4 is the distance with which Extension E4 travels past its previous swing low. And so on for P5 and P6.

For more information on how to use this, including chart examples, please refer to Section 3.2.2 of the YTC Price Action Trader.

The following image was a part of last week's newsletter article, "Real Opportunity is Found at the Edges of Market Structure". Following the publishing of that article, I received a great question via email… Question: "Isn't buying at the lower low (D) just trying to catch a falling knife? If a downtrend consists of LL’s…

If traps aren't currently a part of your strategy, please take some time out to consider whether or not they should be!