I recently posted the following image on the YourTradingCoach Facebook page. 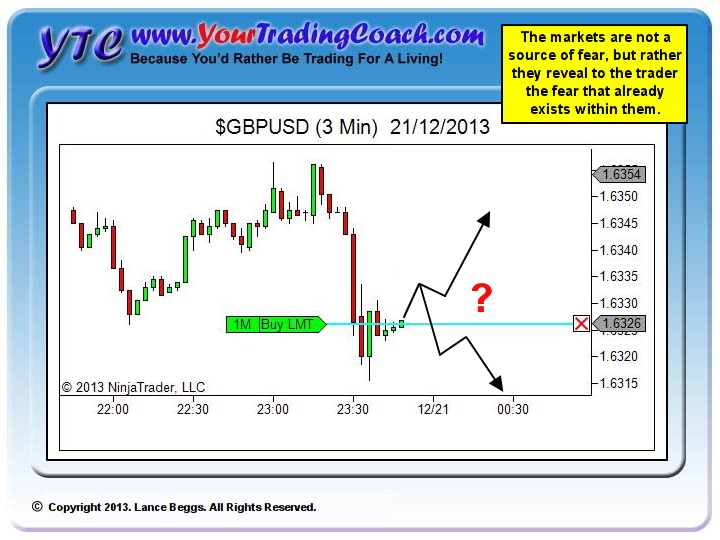 For the sake of this article, ignore the text in the yellow box.

Actually… don't ignore it… put it aside for now but do think about it later. It's incredibly important and may well reveal to you the real essence of trading psychology.

But for the sake of this article, let's focus on the trade.

There is no reason to buy till I can recognize a changeover of power!

This is an absolutely valid comment given the lack of context provided in the facebook image, as touched upon in my reply:

This chart is missing all the wider context that comes from HTF and earlier TTF price action. Any discussion of long vs short vs stand aside is not really possible just from this small snapshot of data. The point of the post though was not the trade, but the text regarding fear and trading psychology. (There was good reason to go long though!)

So let's look at the trade in a little more detail.

It's important, because it reveals a different way of thinking that doesn't necessarily require you to wait for a clear and definitive "changeover of power". 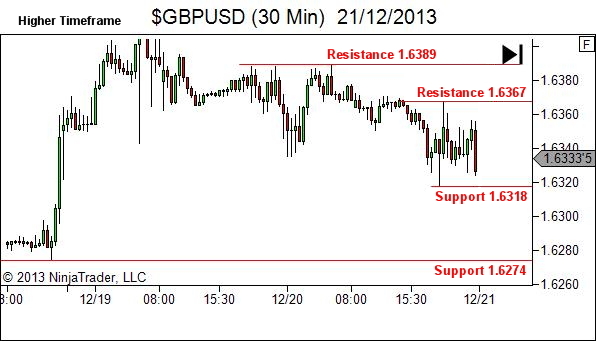 Our S/R framework, at the close of the last higher-timeframe candle, shows two levels of resistance above and two levels of support below price. Price is now approaching support at 1.6318, with a clear run all the way down to 1.6274 should the level break.

But there is something significant that stands out to me while viewing the prior action on this chart.

Price has struggled to break all prior levels of support. 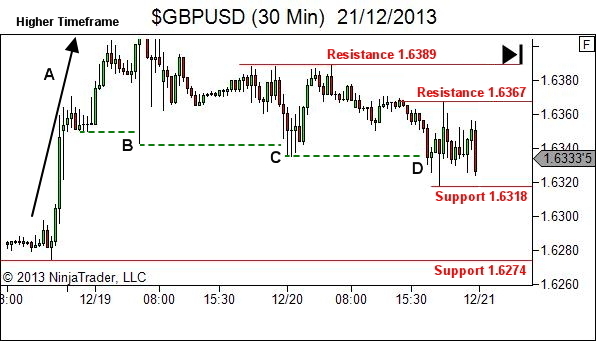 Since making explosive rally A, price has broken lower support three times at B, C and D. In each case the initial break was rejected. And while price has trended lower on this higher timeframe, it's been anything but a clean and orderly trend.

And here we are, yet again, approaching support at the new level of 1.6318.

Let's look now to the trading timeframe, at the same point in time as shown in the above charts. 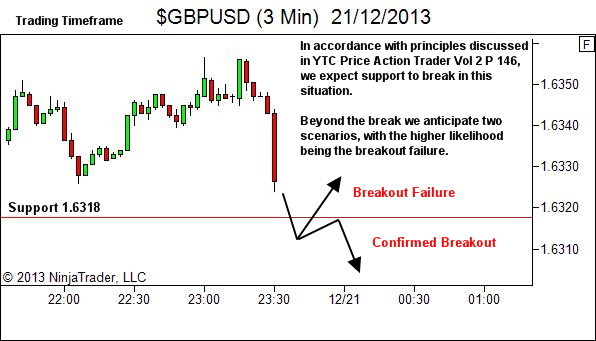 Those who have read the YTC Price Action Trader  know to expect a break of the level (for reasons provided in Volume 2, Page 146).

Beyond the breakout we anticipate and plan for one of two scenarios.

If the market sentiment is indeed bearish then the break should hold strongly, accepting price in the new region and confirming the breakout. If this plays out we'll look to sell short on the first pullback following the breakout.

But if sentiment is in fact bullish, the breakout will fail to hold and price will rally back above the support level. In this case, we'll look for a breakout failure buying opportunity.

Given the prior difficulty in breaking support levels, my personal expectations are VERY MUCH leaning towards the breakout failure scenario. But I remain alert for both possibilities. 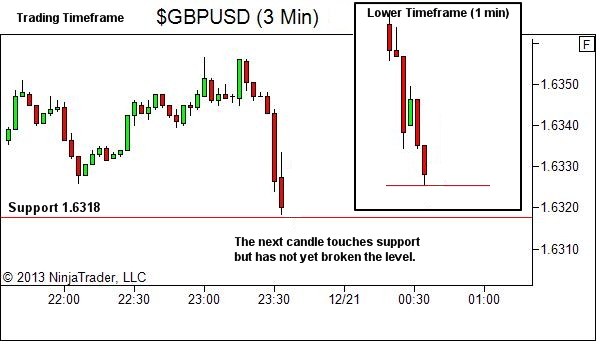 And one candle further… 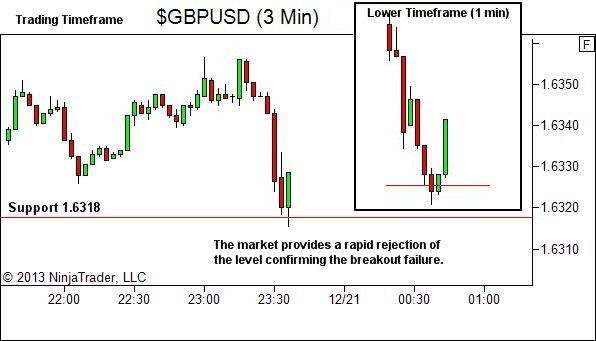 Price has confirmed our breakout failure scenario. More aggressive traders may have managed to enter at least a partial position on a break above the lower timeframe stall, shown by the double narrow-range candles at support.

Let's assume we didn't take that entry at the lows though. The reality is that it can be tough to take these, given the fact that we're fading what appears to be a strong bearish move.

In this case, the initial breakout failure did not offer any buying opportunity. And price is now too far from the support level for my liking.

We move on, awaiting the next opportunity.

And when considering a strong move into S/R, the best opportunity will often come from a weaker second retest of the level. 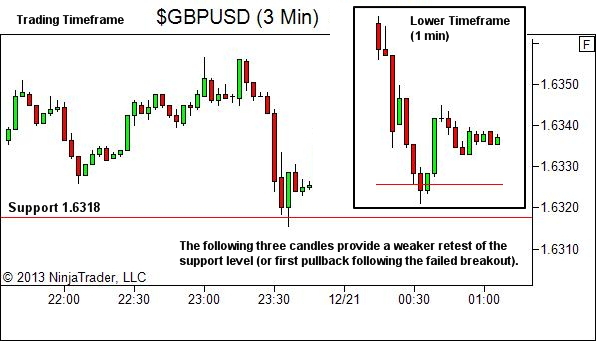 The next three trading timeframe candles have failed to show any further follow-though in the bearish direction.

In this case we had the initial attempt at support which actually broke the level but was immediately rejected. This was followed by a second, much weaker, retest. This is clearly not the behaviour of a bearish market.

Two failed attempts to do something will often lead to an attempt to do the opposite.

If the market can't go down, the path of least resistance is up.

So we now look for a buying opportunity on a break above the trading timeframe stall, if not earlier. 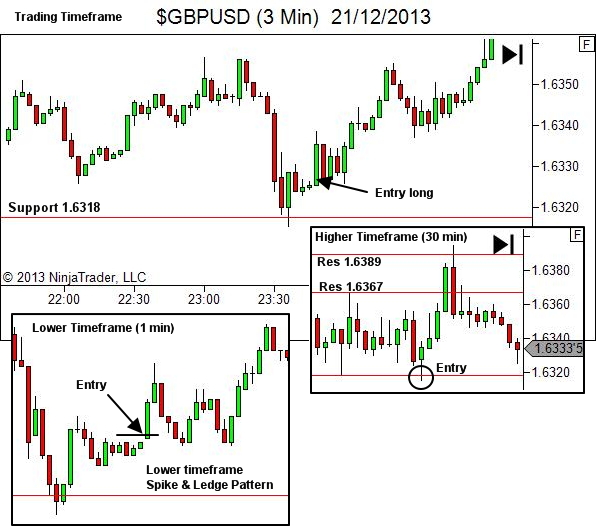 But with a wider higher-timeframe and trading timeframe perspective, we can see that this was actually a GREAT buying opportunity.

But my concern was his statement that there was no reason to buy until seeing a "changeover of power".

We buy because there are no more sellers.

This is a concept we've touched on briefly before. Check the following articles if you wish to explore this idea further.

Many traders are taught only to wait for a "changeover of power". They might stand aside until a break of the downtrend structure, for example, entering long on a break of the last swing high.

But if you think a little deeper regarding how and why price moves, you'll find that it's not always necessary to wait for a "changeover of power" in order to buy.

Often entry can be taken well before this point, when it's clear that the sellers have given up.

I was recently discussing EMA vs SMA with a trader who uses moving averages as a component of his analysis.  (Note: EMA = exponential moving average; SMA = simple moving average) Specifically, one part of his methodology requires the identification of a turn of a short-term average against the trend to indicate a weakening of…

Continuing a theme from previous articles – here and here. Keep your focus ahead of price Never let price action take you somewhere your brain didn’t get to five minutes earlier. This is not just a concept to apply during the trading session. It also applies at session open. Start the session with some thought…

Let's say we have a market with a clear bearish bias. Price then pulls back higher and reaches an area in which I'd be happy to enter a SHORT position. Two of the key things I'm looking for are: Signs that the bulls have exhausted everything they've got. Signs that the late bulls, entering…

I came across a great quote during the week, which has led to an unplanned continuation of our recent theme on self-deception.  Original articles: https://yourtradingcoach.com/trading-process-and-strategy/a-new-market-model-the-market-is-a-self-deception-mechanism-part-1-of-2/ https://yourtradingcoach.com/trading-process-and-strategy/a-new-market-model-the-market-as-a-self-deception-mechanism-part-2-of-2/ The quote: “There are two ways to be fooled: One is to believe what isn’t so; the other is to refuse to believe what is so.” …Søren Kierkegaard There…