Most of the traps I trade come from the Trading Timeframe or Lower Timeframe charts.

I don't watch the higher timeframe for traps.

However, I do see them from time to time. And they can provide some nice trading opportunity. 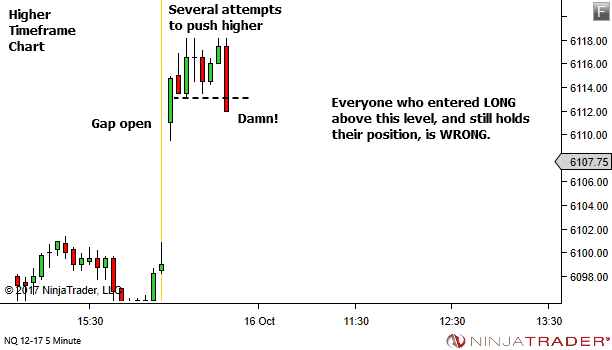 Ok, "wrong" is probably a poor choice of word. The reality is that we don't know their strategy and their timeframe.

But let's just say that they're in a drawdown.

And if they're operating on similar timeframes to us, their position is NOT looking good.

They'll likely be under a significant amount of stress. And probably hoping, wishing and praying for some way to get out of the position closer to breakeven.

Let's drop down to the Trading Timeframe chart to see where we currently stand. 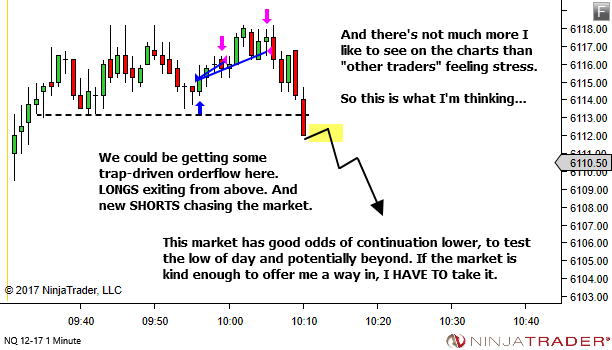 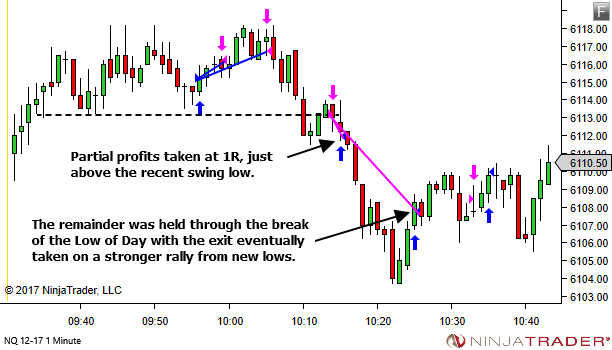 From a Trading Timeframe perspective, this was simply a BPB of a sideways range boundary.

But from a wider context perspective, it was also triggering a trap on the higher timeframe chart. Those betting on a gap-open continuation higher suddenly found their trade premise threatened.

And this makes our range breakout SHORT just a whole lot sweeter.

It pays to always be asking, "Is anyone trapped?"

And while our focus should primarily be on the Trading Timeframe chart, we should ensure our scan also extends to the Higher Timeframe chart. At least once per new higher timeframe candle.

Maintain a feel for context. Where is the current price action occurring within the higher timeframe structure? Sometimes this wider situational awareness will keep you out of a bad trade. Other times, as here, it can add additional fuel to our trade idea.

Always be asking, "Is anyone trapped?"

Although we trade very differently, I am quite a fan of Al Brooks first book, "Reading Price Charts Bar by Bar". One of his quotes which has stuck with me over the years is the following: Countertrend setups in strong trends almost always fail and become great With Trend setups.   This quote came…

On Monday, prior to the market open, I shared the following YTC article via social media – https://yourtradingcoach.com/trading-process-and-strategy/patience-at-the-open/ The title of the article is "Patience at the Open". And that pretty much sums up my intent in sending out that link. Simply trying to slow down the excitement and stop you jumping into the…

A term you'll hear me use occasionally is "trading the edges". What I'm referring to here is: In a sideways market with no particular bias either direction, taking trades only in the vicinity of the outer edges of the trading range; in particular when it traps a "breakout" trader. Trades may be taken long from…

A fortnight ago we looked at a few trades which were entered using the concept of "buying because there are no more sellers"… or "buying because the market can't go down". https://yourtradingcoach.com/trading-process-and-strategy/things-do-not-change-we-change/ I've received some requests for another example. And two people asked to see what I'm looking at on the lower timeframe. So…

See here if you missed the earlier articles – No. 1, No. 2, No. 3, No. 4, No. 5, No. 6 The concept: I've been writing online for over a decade now. And for that whole time I've been promoting the idea of daily study in both Market Structure and Price Action. It's a…