I occasionally get email requests asking how I define the trend, so to save on future email replies here’s the short answer…

It seems that perhaps many people assume I use an EMA, given that the charts shown in my newsletter typically display an EMA(20). That’s not my trend definition though.

I use fairly standard definitions.

So, let’s look quickly at how this works.

The Swing High is candle C. All other candles reference this one.

Likewise for the swing low. 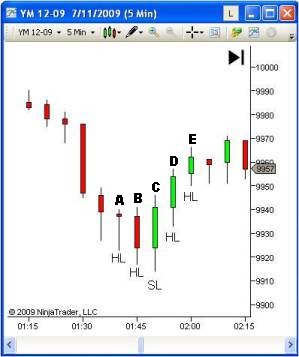 The Swing Low is candle C. All other candles reference this one. 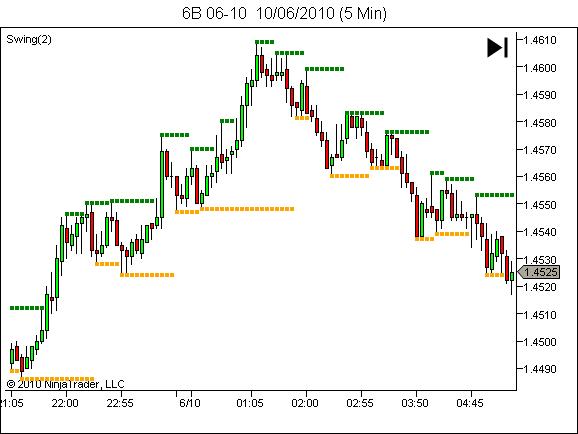 There’s a little more to it, which will be covered in future articles (or in much more detail in the upcoming ebook), such as where exactly I define the change of trend, what happens when we have matching price bar highs or lows, and when and how I define a market as trending sideways rather than up or down.

But for now the key point is that there’s no secret trend identification method. I use a very standard trend definition – HH/HL and LH/LL.

So, why the EMA on my charts if it’s not for trend?

The EMA is not actually needed as all my analysis can be seen though price action alone. It is there simply because it can provide a quick visual interpretation that’s close enough for much of the price action analysis that I conduct, including trend, momentum and volatility.

Of course, it could easily be used as your sole trend indicator, if you preferred. In many respects, it’s simpler. As you’ll see from the following chart, the two approaches give much the same result… 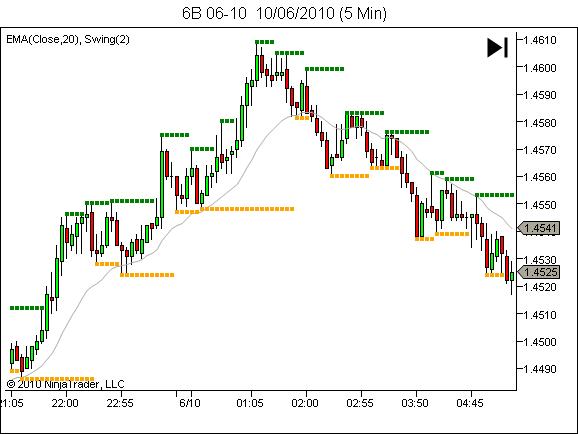 The fact is, it doesn’t really matter what definition you use, as long as your method of defining trend closely follows the price action in the timeframe within which you’re trading.

No Trend Definition is Perfect!

No matter how you define it, there will ALWAYS be a pullback that goes JUST far enough to trigger a change of trend, before then reversing again and resuming movement in the original direction. ALWAYS.

The trend is not your friend. Or if it is, it’s the kind of friend that talks about you behind your back. 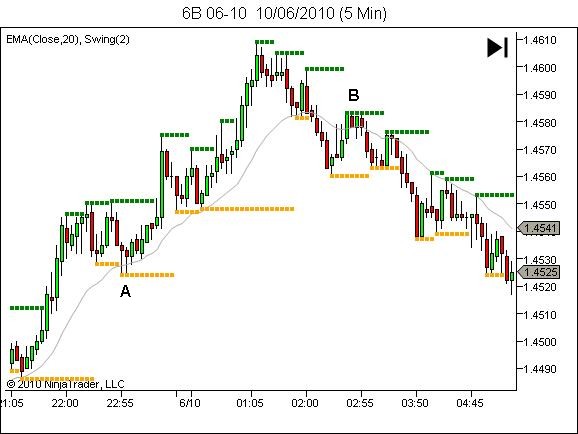 This is where you need to be learn how to read the price action. Don’t automatically assume that a breakdown of trend (in accordance with your definition) implies a change of trend. Observe how price reacts at the change of trend location. Area A for example broke the previous swing low twice, but in both cases was not able to hold lower prices, closing above the breakout point. Candlestick fans will recognise two hammers. Trapped trader pattern fans will recognise a great three-swing retrace.

Failure to hold the change of trend provides a great entry back in the original trend direction (regardless of whether or not your definition now considers that counter-trend).

I get asked from time to time which of my setups is my favourite, or which I would choose to trade if I had to limit myself to one setup only. I really hesitate to answer this question, because I'm a firm believer that the setup chosen at any particular time needs to be the…

Last Friday we looked at a couple of examples of Market Structure journal entries, one of which involved a weak emini Dow open in the vicinity of the prior day’s low. Let’s quickly review this example, and the lesson it offered. If you want to review the whole sequence you can see it here:…

Here's a little post-session exercise which may help stretch your performance to "never-before-reached" profit levels. Pick a target just above your all-time-high for a trading session. Whatever that is – $100, $500, $1000, $5000 or more. And ask yourself the following. Looking at the chart for today's session, with the benefit of hindsight, how…

Late last year I released a popular series of two articles which dealt with the topic of "Winning through Losing Better". You can see them here if you missed them: Part One, Part Two. I was reminded this week of a comment from Part Two. Here's the relevant text from the article: Search for market…

I’ll be the first to admit that there is MUCH room for growth in my own development as a trader… in terms of knowledge, skill and attitude. In fact, I recognise that it’ll be a life-long journey. One area that has a lot of scope for development is my use of volume analysis. If you’ve…