Here’s some great Q&A with a YTC reader:

I wanted to ask what do you do in a situation where price retraces just enough to scare you. I mean let’s suppose we just trade with one contract to make things more interesting. We consider setups that offer a 2:1 as R:R. You enter your position (with one contract) and price goes in your direction but bang it reverses and goes so far as coming back to the level of your entry point. What tricks if any would you recommend to avoid scratching the trade? These situations offer quite a challenging dilemma to me.

Any advise is welcome. I have included a setup which occurred during the Globex session on the ES today March 14, 2012 (Eastern Time zone). I did not trade it but it illustrates quite well such a situation. 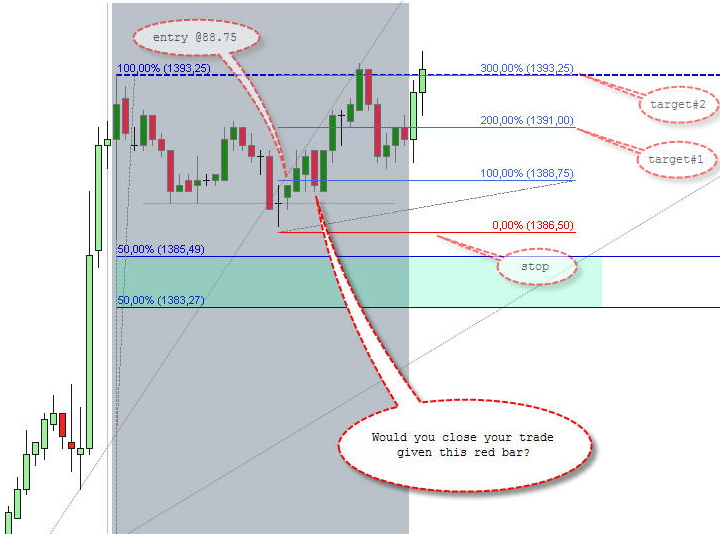 Thanks for the great question.

Denise Shull (http://therethinkgroup.net/) raised an interesting point in a recent webinar … that trade results will almost always lead to regret, regardless of whether they’re a winner or loser. A losing trade is obvious, leading to all the questions in our mind such as "why did I take that entry?" or "why didn’t I scratch as soon as I saw ***?". A winning trade is not so obvious though. But if you think about it you’ll see that there is almost always some way that we could have improved upon our results. Usually this will result in either regret for having exited too late after the market reverses and takes away much of our profits. Or regret for having locked in our profits too quickly and then missed out on much more as the market moves on without us.

Your example trade definitely fits into the latter category; resulting in frustration and regret at having missed out on any profits at all despite having correctly identified the move.

It’s important therefore to first recognise that you will never perfect your exit strategy. Review the "exit strategy" ebook at https://yourtradingcoach.com/ebooks/, in particular the part discussing the fact that you can never know the optimal exit strategy for any trade until after it’s over. You need to learn to accept imperfection and to forgive yourself for less than optimal decision making.

That being said, we should always strive to learn and to improve our decision making.

Let’s discuss first the decision to move the stop (or scratch a trade). Then consider some ways we may be able to improve our decision making.

A stop should only be moved when we identify a new level that will invalidate the trade premise if hit. In addition, we may work an exit or scratch a trade if either (a) the trade has not acted as it should within an expected period of time (time stop) or (b) price acts in a way to lead us to doubt our decision.

Assuming I understand correctly, you’re talking about scenario (b); price retraces via a big red candle to scare us out of the trade.

The following are a few suggestions (in no particular order – just as they pop into my head) which may help with your decision making and actions whenever this occurs:

Never let price take you somewhere your brain didn't get to five minutes earlier. Keep your awareness ahead of price with a clear idea of expectations and a plan of action for whatever eventuates. In conducting your analysis, think several candles ahead. Where is price going? How is it likely to act? Why? Will that…

Volatility has returned – big time! I assume you’ve seen the results of the session on the news. But if you missed it, here’s the daily chart of the DJIA (Dow Jones Industrial Average) showing the drop which at one point had fallen just under 1000pts (previous close 10,868; today’s low 9,869.62):     Impressive…

Opening Range breakout strategies are very popular in the stock and emini-futures markets. If you’re not familiar with these Opening Range breakouts, a Google search should also bring up more information than you can probably read in a lifetime. To greatly simplify the strategy, it essentially involves identifying the high and low price from the…

Always consider taking the very first pullback after a structural change, such as change of trend, confirmed breakout or confirmed reversal from a support or resistance area. And a similar example from the same day…

Within hours of publishing last week's article, I received contact from two readers who both had identified similar opportunity within other forex pairs. First, see last week's article here if you missed it: https://yourtradingcoach.com/trading-process-and-strategy/feeling-joy-when-i-look-at-this-price-action/ And let's check out the followup… First was a twitter message from AC: @YTCtrading Aussie/USD this morning 🙂 Same same…