Last week we examined an early-session opportunity in the Australian SPI futures market.

See here if you missed the article: https://yourtradingcoach.com/trading-process-and-strategy/late-session-breakout-early-session-opportunity/

Over the weekend I received an email from a reader asking an excellent question. I thought I should share it with you all.

You mentioned that there were 2 opportunities to go long.

Would you have taken the first one?

The pullback “B to Open” was weak, then the impulse move “Open to BOF” appears quite bearish, though you do get the BOF set up.

Image from Prior Article: 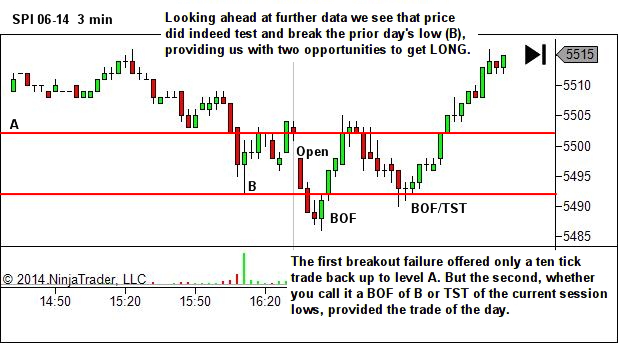 Great question. It’s good to see someone critically analysing an article and applying some thought to their trading. Thank you!

Firstly, I don’t trade SPI. It’s just one of the markets I monitor. I chose it because it’s my local index futures market.

Whenever I write anything about a market I haven’t actually traded live, please treat everything I write with some degree of scepticism.

I say there are two opportunities to go long. But without having been there LIVE there is no way of knowing for sure whether or not these trades would have (or could have) been taken. Even if I did try, perhaps illiquidity at my price level may have resulted in a failure to fill the order.

I do of course make all effort to get as accurate a decision as possible. Even stepping through the charts bar by bar to confirm that I am satisfied that I’d take the trade. But without being there at real-time, maybe there’s something I’ve missed.

Now having said that, let me answer your question.

Would I have taken the first one?

The first though was a borderline maybe/maybe not; leaning slightly towards the “yes I would take it” decision.

I agree entirely with your analysis. The strength of the opening move down would be a concern. This won’t necessarily rule out a BOF trade but does make me more cautious. What I require in that case is a really good TTF or LTF stall, or evidence of a failure to continue. Something like two clear attempts to push lower, both failing. And preferably a 123 or a spike & ledge pattern, such that the second attempt lower could not break the low of the first.

Have a look at the image below which shows the 1 min (LTF) chart. I was initially going to include discussion of this chart in the article but decided at the end to leave it out. Sometimes “too much information” can increase confusion and take focus away from the core message of the article.

You’ll note on the 1 min chart that the market did not offer a clear and easy 123 or spike & ledge pattern. Normally I’d pass and say that unless I made a decision to trade at TTF LWP, then more than likely I’d pass on this trade. EXCEPT FOR ONE THING. The narrow range bar identified on the chart really interests me. Occurring where it has right at the prior day’s low, it really provides a nice tipping point. Break higher and price should confirm the larger-structure breakout failure. Break lower and I’ll be looking again for a further (and better) evidence of a failure to continue.

Essentially this is like a spike & ledge; albeit with the ledge being only one LTF bar in length.

Would I have taken it? I can’t say for sure. It is borderline. But this one LTF bar really interests me. I’d love to think that I would have been focused enough to see this in real-time and would have taken an entry here… even if just a partial position.

Certainly though, the second entry is much nicer and I’d be absolutely kicking myself if I didn’t enter at that one. 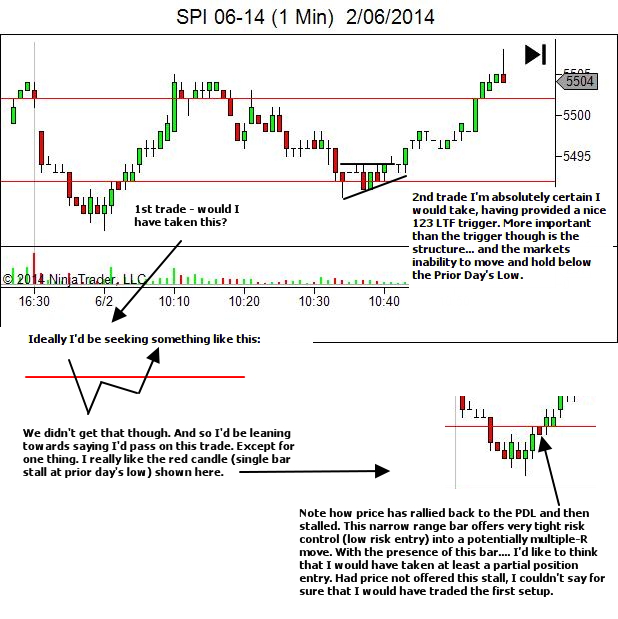 Email Question: Hey Lance, Thanks, I believe some of your knowledge held in trading is very wealthy to your students and viewers. I have a few questions on Candlestick Reversals please. 1. Some candle patterns like Hanging Man and Hammer are same in body form but different in which trend they appear, how should we…

One of the most common email questions I receive at www.YourTradingCoach.com is on the topic of stop running. Sometimes the question comes as a result of the trader having been stopped out on too many occasions by just a tick or two, leaving them to watch from the sidelines while the market then moves in…

I want to expand upon an idea we discussed in a prior article – https://yourtradingcoach.com/trading-process-and-strategy/what-if-you-narrowed-your-focus/ That is the idea that while learning and developing as a trader, you may find greater value in narrowing your focus and specialising in just one small segment of the daily trading session. The suggestion was that rather than fight…

Last week we profited from recognising and exploiting a Higher Timeframe (HTF) trap. Check it out here if you missed it – https://yourtradingcoach.com/trading-process-and-strategy/higher-timeframe-trap-everyone-long-above-this-level-is-wrong/ This week, let's look at the other side of traps. The fact that sometimes… the trapper becomes trapped. Repeating for effect: You don't always get it right. Sometimes you're "the other…