Entry to a counter-trend trade can be difficult to time, especially when it’s not in the vicinity of any significant S/R level.

(Note: the example here uses a trading timeframe of 1 min, with a 20 tick lower timeframe… but the concept is equally applicable on longer timeframe combinations) 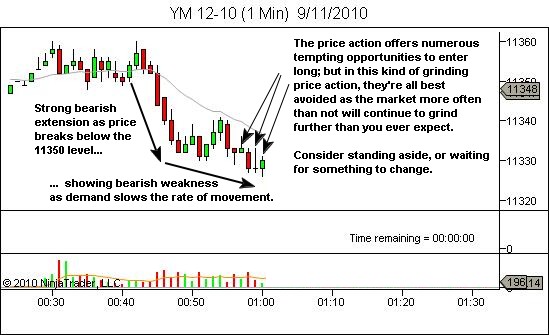 Let’s look at a lower timeframe, where we time entries to trades: 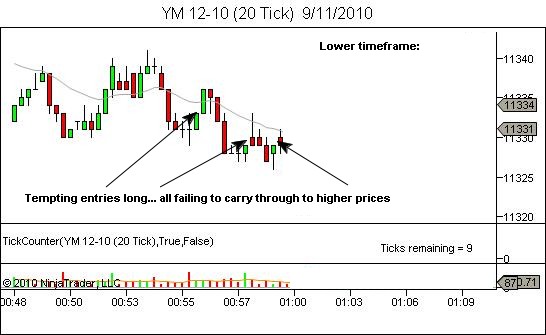 It’s probably wise advice for newer traders to just pass on these sort of trades. Stick to the with-trend trades and only consider counter-trend when a great signal is provided at S/R; in particular a breakout failure.

However, sometimes these grinding areas of price action do offer a signal that’s too good to pass up.

The micro-channel false-breakout is one of those.

Let’s look at the trading timeframe again (below). Note the upper and lower lines defining the channel. I don’t personally draw channel or trendlines on my charts – they’re there to assist with your identification of the appropriate area. And with experience you’ll see them without having to draw lines. And also it doesn’t matter if the lines are parallel, converging or diverging. The important point here is that we’re looking for something to change… the grinding crawl lower to suddenly offer some price action which surprises traders. 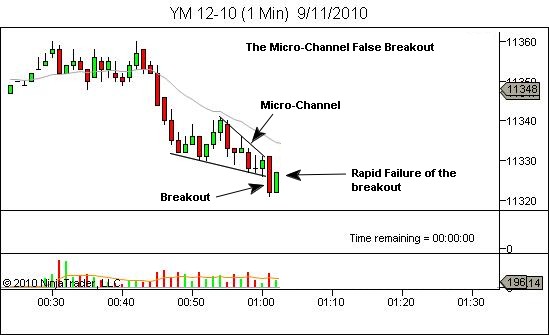 In this case, price suddenly surges lower, which will attract new shorts and stop out some of the weaker longs.

However it then fails to continue; failing to attract a wider bearish following. Price rallies, trapping the new shorts in a losing position.

Here’s how it looks on the lower timeframe: 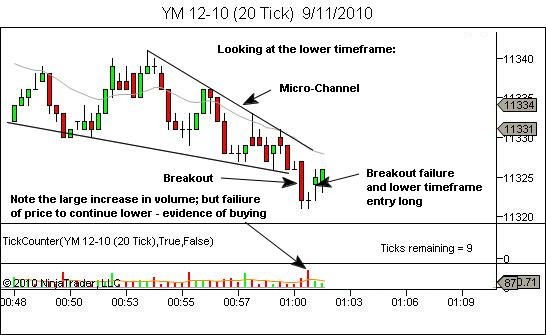 Note the difference between any earlier attempts at a long entry, and this micro-channel false-breakout entry, from the perspective of the other traders.

The micro-channel breakout causes high emotion… new shorts enter the market with some excitement… before the market turns around and smashes them.

This is a high emotion event. Far greater than any emotion associated with earlier entries.

Here’s the outcome of the micro-channel false breakout: 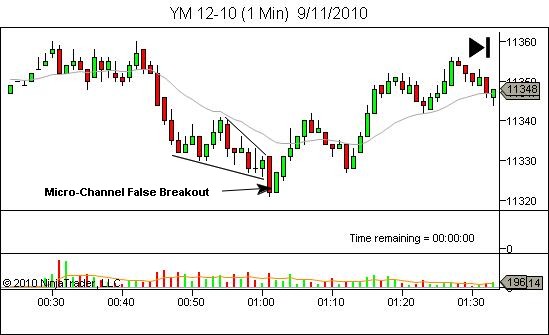 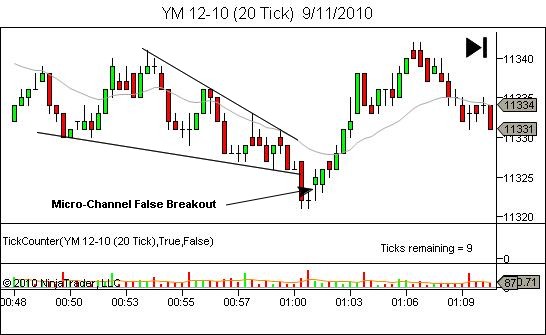 For YTC PAT readers, you’ll know that a weakening trend counter-trend entry such as this does not automatically lead us to expect a reversal. Trades such as this should be taken in expectation of a short move only. Our expectation is then for a complex pullback and continuation lower, unless evidence is shown of strength against the trend and acceptance of trend-change. Of course, the trend change did occur in this case… so review the above charts to see how you would trade the action following the micro-channel breakout failure. In particular, where you see the changes of strength / weakness; and where you identify the change of trend. There’s no right or wrong answer… just learning.

I often talk about identifying the areas where “other traders” are trading in really dumb places. Places where they’ve found themselves trapped in a really low odds trade. Or trapped out of a position they wished they were in. Places of emotion – fear, anger, regret! These areas of the chart often provide us with…

Market Open Traps are by far my favourite opening play right now. I've demonstrated these quite a bit over the last year or two. Sorry for the repetition – but they're just working so well lately. Not always for massive profits. The two shown today are definitely singles, rather than home runs. But they're…

A YTC reader Ryan asked if I could discuss a 210 tick move in Crude Oil that occurred at 11:25am ET on Thursday, March 15th 2012. Would you mind detailing the entry opportunity on that 11:25am short provided there was an opportunity? Thanks! This is the price move… (Note: the date/time difference is simply due…

The following charts demonstrate low timeframes, but the concept is applicable to ALL timeframes and ALL markets, provided they offer sufficient liquidity to ensure smooth price flow. The way price moves offers clues to future direction! You just need to learn to read it!