The more I involve myself with trader education, the more I realise that a key error on the part of most traders is their failure to truly understand and accept trade loss.

I see it all the time in reader emails – "WTF! This trade lost! How could it have lost?"

We all understand the theory of the probabilistic nature of the markets.

We know that we can't win on every single trade.

We know that we'll lose on a good percentage of them.

We know that this is a game for the "long term".

But there's a real disconnect between what we know to be true and what we are emotionally able to accept as true.

There is a concept in poker which I think we should adopt in trading. It's called the BAD BEAT!

In trading, a bad beat is a trade which meets your setup criteria and has a good reward:risk ratio, which is managed correctly in accordance with your plan but still loses anyway. Or one that would have profited but didn't fill on the entry order. Real losses… or lost opportunity… despite playing the game in the statistically correct way.

But you were right to take it.

It's just part of the game. 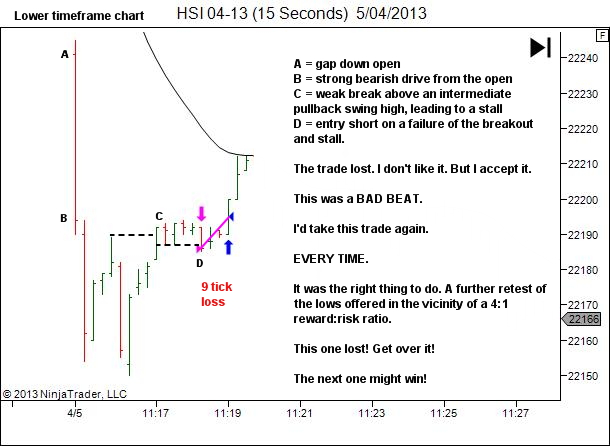 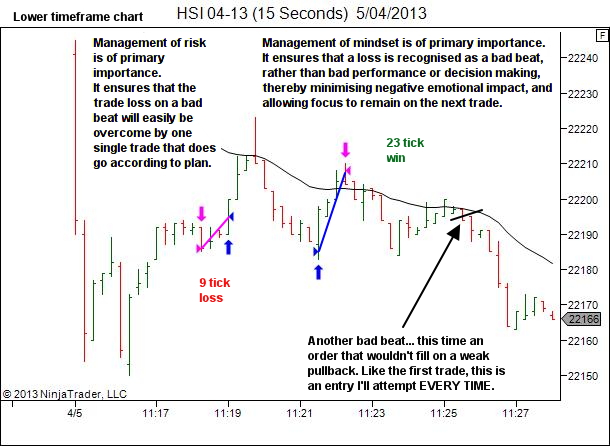 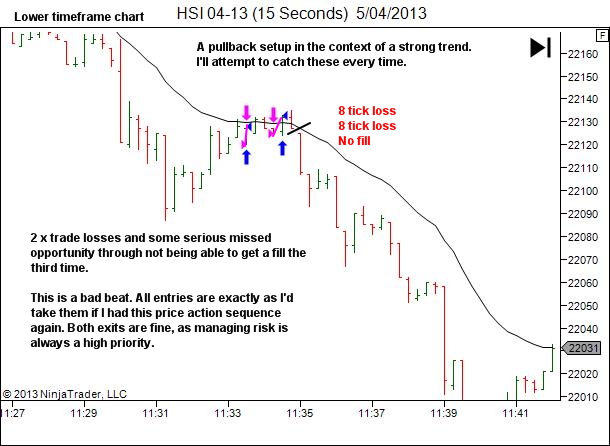 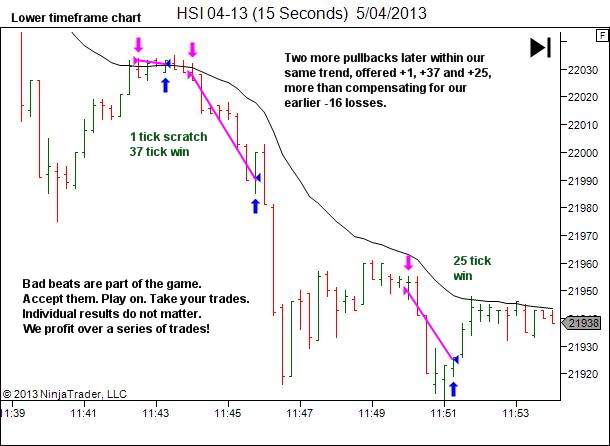 If you're getting angry at a poor trading decision then that's absolutely fine. Remove yourself from the markets so that you can cause no further harm. And learn from it.

But if you're getting angry at a good trading decision that loses, to the point where it's impacting upon the mindset that you take into the following trades, then you've got a problem. You haven't completely accepted the concept of the bad beat being a normal part of trading.

It's not enough to rationally know that not every trade will be a winner. You've got to know it at some deeper subconscious level.

Drop position size or return to sim UNTIL you've seen and experienced enough losers and missed opportunity to know that this is just part of the game… and that the next time you take a similar opportunity it will likely offer more than enough to make up for the bad beat.

Individual trade results do NOT matter.

What matters is the combination of your win% and win/loss size ratio, over a longer-term sample of trades (20+).

In terms of worrying about wins or losses… that is where you should be focusing… on your longer-term stats.

Not on your individual bad beats!

I don’t recall who said this… and I’m paraphrasing… but I absolutely loved it when I heard it and it’s stuck with me ever since. “Why shouldn’t we try to pick tops and bottoms? That’s where the risk is smallest and the profit potential is greatest.” (If you recognise the actual quote can you please…

This was an interesting sequence of trades – three which I got completely wrong, followed by one which I finally got right. The key takeaways: You won’t always get it right. Sometimes your timing is out. Other times, like in this sequence, your assessment of bias is just wrong. Good entry location and good active…

I think it's time we revisited a topic we discussed a few years back. The fact that an individual trade does not provide sufficient data to allow you to make informed changes to your plan. Changes MUST consider the impact across a series of trades. I see this problem repeatedly in email conversation with new…

I just want to take the opportunity here to remind those on higher timeframes that almost everything I write should be thought of as largely timeframe independent. Most of the examples I provide will come from very low timeframe charts. Why? Because that’s what I trade! But while the chart images I show in newsletter…