Don’t make things more complicated than they need to be. This setup is simple and it appears time and time again. 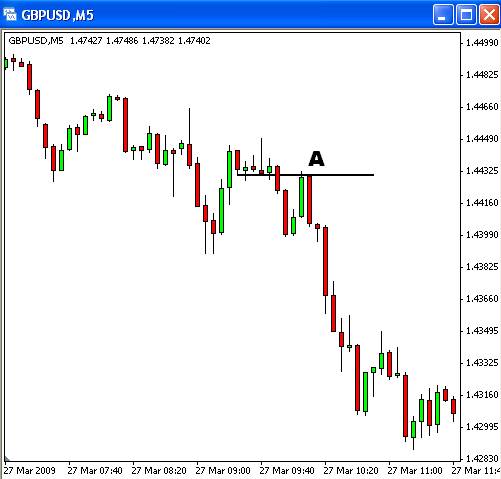 First, let’s look at the longer-term chart, above. This one is the five minute chart, but the concept applies to any timeframe (whatever you want to call longer-term). The important information on this chart is the trend, which is clearly down. To the left of point A we have a downtrend pullback, which interestingly forms a short-term ledge of support, shown by the horizontal line. The shooting star though shows evidence of higher resistance, leading to a breakout below the ledge two candles after the shooting star. Certainly you could take the entry on this break down – but that’s not the one I’m showing you today – the one we’re looking at is point A.

Point A shows a rally back to the previous swing high, or more specifically in this case the point of breakout at the lower range of the swing high.

Moving on to the 1 minute chart for a more refined look: 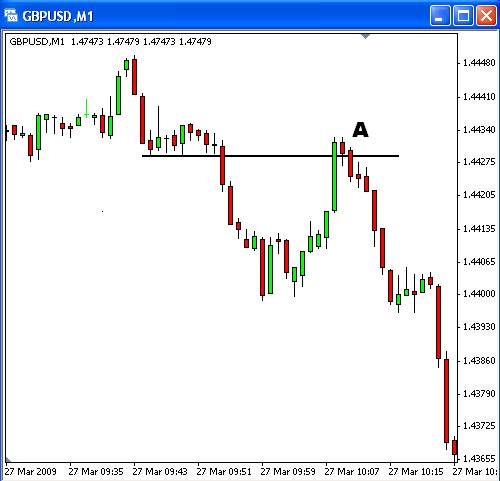 Exactly as described – price breaking below the area of short-term support (now resistance) and rallying back to the point of breakout, offering a low risk entry at point A in the direction of the larger timeframe trend.

The first target is the previous swing low (approx 20 pips), with any subsequent parts being trailed.

Let’s talk about Market Structure and Price Action study, commencing with a question I received on Thursday – Do you still do daily study of market structure? And my response, sent out via social media: A followup comment from the original questioner… “I’ve tried this in the past but not been able to stick with…

Recent articles on my session review process mentioned the use of a market replay feature. I’ve been asked for some information on this tool. Not surprising really – it’s something that most forex traders will not have experienced. Market replay is a feature that has appeared on many futures platforms in recent years. It allows…

Monday’s emini-Dow session offered two great examples of the higher probability way of trading a reversal at S/R, when price accelerates into the area. The examples occurred on the 10 tick chart, which I’ve been using as my lower timeframe lately, however the concept is applicable on all timeframes and markets (provided they offer suitable…