I assume you’ve seen the results of the session on the news. But if you missed it, here’s the daily chart of the DJIA (Dow Jones Industrial Average) showing the drop which at one point had fallen just under 1000pts (previous close 10,868; today’s low 9,869.62): 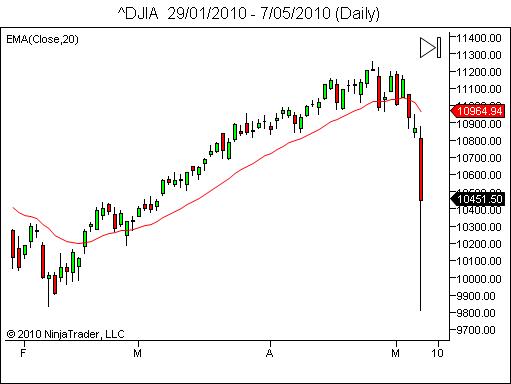 Many people would have had their accounts wiped out today, or at least severely damaged. Hopefully readers of my newsletter have fared ok. If there’s nothing else you get out of my writing, I hope it’s that the markets have to be respected and that your number one priority is to manage risk.

I’ve already had an email asking how I survived. To be honest, I missed it. That’s one time I’m happy to be trading from the East Coast of Australia. If I do trade US markets, it’s rarely (if ever) after midday ET, which is 2am my time. Definitely time for bed.

In this case, I did trade the YM, but only the first hour of the session. The chart of the first hour is shown below in the shaded box, giving no indication of the carnage to come. 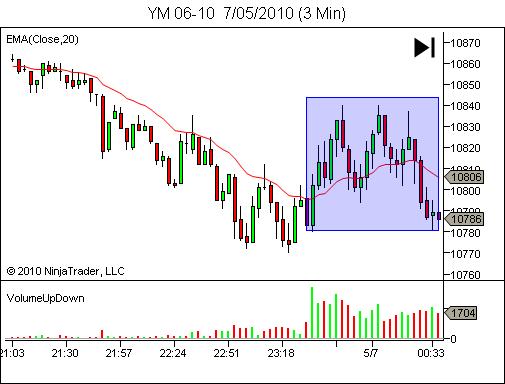 To put the size of the subsequent move into perspective, here’s the whole session, with the first hour still shaded… 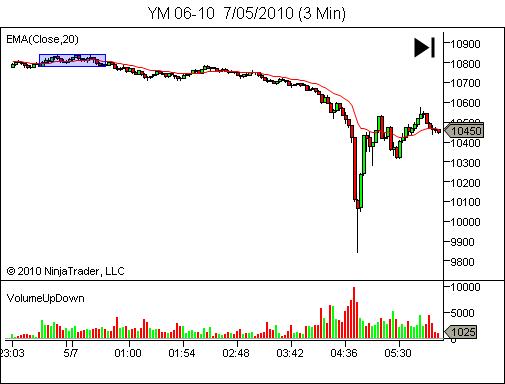 So, had I been traded, how would I have managed the session?

Let’s zoom in on the period of ‘crash’… 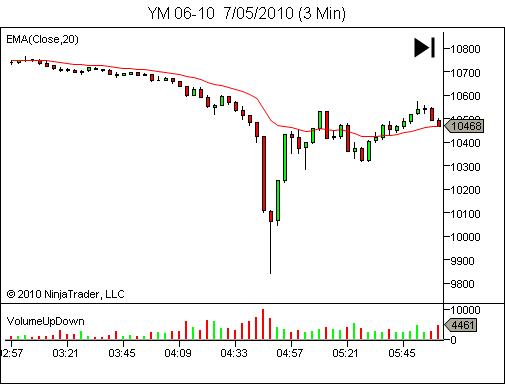 To be honest, unless I was already positioned short from an earlier entry I would likely have missed the real panic selling phase which started around 04:42. As I’m not willing to chase price there just wasn’t an entry opportunity beyond that point.

And in fact, had I been in a position, I’d like to think I would have closed it out, accepting that I might leave a lot on the table. For me, the volatility and rate of movement at this time were beyond anything I’ve experienced, meaning difficulty in managing risk. Best to stand aside and watch in awe, waiting for a little calmer action.

Same with the subsequent bounce – risk for me would likely have been too difficult to contain. Best to stand aside.

But that’s just me. If you did trade through this sequence and survived, while containing risk, I salute you. Well done.

Anyway, as it currently stands (according to the news), Treasury and SEC officials are investigating in order to find a ’cause’. There are rumors of trading errors, in particular in PG which fell from around 60 to less than 40 in a matter of minutes. The NASDAQ has reported that they’ll be cancelling all trades between 2:40 and 3:00pm ET which show a rise or fall of more than 60% from the last trade price at 2:40pm or earlier (no word yet from options or futures exchanges). And there are fears that algorithmic trading intensified the chaos.

So standby for some fallout over the next few days.

The fact is though, that whatever they find or whoever is made a scapegoat, is largely irrelevant as far as we’re concerned. As traders we need to understand that the market is always capable of account destroying events. And we need to have in place routines and practices to manage that risk, whether through stops, size, hedging or perhaps even standing aside if not comfortable.

To be honest it’s not all that surprising, in particular to anyone with an Austrian economics perspective. The whole rally and in fact the whole economy is built on a house of cards. Across the world, governments have overspent and the time to pay up is fast approaching. We live in interesting times!!!

All the best for Friday. With NFP out at 08:30 ET, riots continuing in Greece, and a global marketplace of nervous traders, this will be one to approach in an extra cautious manner.

PS. Oh, and it’s not just the equities markets that need to be careful. Here’s the GBP/USD for the same time period. Not quite the same range of movement, but still quite extreme… 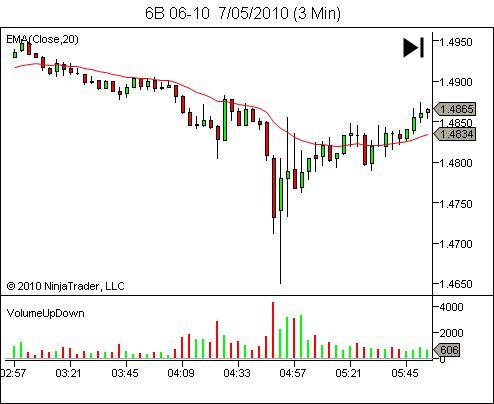 This is a theme that has been constantly pushed at YTC since right at the beginning. Seeing the trade BEFORE price gets there. This ensures that trades are pre-considered. Pre-planned. Not emotional reactions to sudden price movement. How do we do this? Project your analysis forward. Given the current structure and the wider context, where…

Sometimes the simplest things are the best. We spoke previously about one of my favourite methods for entering into an opening drive. We wait for the first break against momentum. And then strike when we confirm it’s a trap. See here for an example: https://yourtradingcoach.com/trading-process-and-strategy/first-break-against-a-momentum-drive/ But this is even simpler… A PB or BPB Setup…