A Q&A Followup to the Better than Candlestick Series

This email Q&A is with a YTC Newsletter reader, regarding the following article series:

Please review these articles if you haven’t read them already, in order to understand the following Q&A.

In part two you’re explaining candlestick close positions and comparisons to determine sentiment. Are d and f patterns correct? High close is more bearish than a low close? I can’t understand that unless you’re taking prior candle sentiment into it somehow.

The diagram referenced in the question: 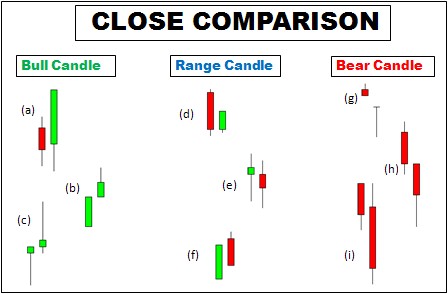 Yes the description of sentiment is correct.

Remember, at this stage of the analysis process we’re simply observing two consecutive candles. We have yet to take the bigger picture context into consideration. So the final assessment of market sentiment could well be very different.

But let’s examine each of the two pictures (d) and (f).

Considering candle 2 only (as a single candle), we see it is a high close candle, implying bullish sentiment.

However, let’s now take the previous candle into account, to get a feel for the sentiment over the last two candles. The previous candle (candle 1) was a low close candle with large range, (ie bearish) and the current candle was only able to retrace approximately 50% of the previous bearish range.

Now… subsequent candles may change that assessment. The price could continue higher through a high close bull candle that breaks above all previous highs. But we don’t know that. We simply are looking at the current two-candle pattern sentiment, in this case weak-bearish. And then we go on to consider the meaning of that within the wider context of the current and previous price swings, and our S/R framework.

A single candle comprising the time period covered by both candles 1 and 2, would have a red body covering the upper half of the range, with a lower tail. Still bearish, but weak-bearish.

The candle addition process would show a single green candle, with body covering the lower half, and an upper tail comprising approximately half. It’s still bullish in sentiment, but once again weak due to the rejection of higher prices.

Subsequent candles may amend this… but for now it’s weak-bullish.

Is this clear? If not, please let me know and I’ll try to explain in another way.

In the end though, it all comes down to context. Where the patterns are occurring within the market is a great deal more important than the patterns themselves.

Ok, thanks lance. You’ve explained that well and I get it.

But… it does seem like fine lines. Candle 2 in (d) wouldn’t have to close much higher before the single candle addition starts to look like a hammer, usually a fairly bullish sign!

You’re right – it can be a very fine line. But remember, we’re just talking about a VERY small part of the picture here. It’s just a quick assessment of the sentiment shown by the latest two candles.

More important is the current bias we have as a result of the bigger picture (context) – the positioning of price with respect to our S/R framework, the direction of the trend, and the nature of the trend movement (slowing down, speeding up, neutral).

In analysing a two-candle pattern in isolation, it’s easy to forget that in reality (while trading) this analysis is occurring within the context of the bigger picture bias. So the difference between a neutral (perhaps slightly bearish) pattern such as shown by (d) and a neutral (but potentially bullish) pattern such as would have occurred if the second candle closed higher forming a shooting star (or hammer)… is perhaps negligible.

Example: bearish bias; downtrend which has moved into an area of support. Both patterns (d) or the more bullish variation, indicate a presence of buying. Not yet enough to break the previous high. But they show a good sign of buying, so confirm the potential for support to hold. We wait for more information, and look for a place to buy.

Example: Uptrend, currently in a normal pullback, pattern occurring after 3 down candles, with price resting on the previous swing high. Both patterns are (again) evidence of buying, and possible signs that the pullback has come to an end. Look for an entry long for continuation of the trend.

Example: Downtrend, not at S/R. Green candle shows potential start of countertrend pullback. This is a sign to watch for strength / weakness of the pullback, remaining alert for an entry short on failure of the pullback.

The same pattern can indicate potential opportunities long or short, depending on the context of where they’re occurring within the market.

Don’t get too caught up in the ‘two candle pattern’ sentiment. It’s a quick assessment, which is then used as confirmation or non-confirmation of your larger market bias. That’s all it is.

Sometimes in conducting our analysis and formulating trade ideas, it’s important to notice what the market does not do. The chart below is a 1-minute snapshot of the 6B (GBP FX Currency Futures, equivalent of GBP/USD for forex traders) from last night, Thursday 25 Mar 10. The market was established in a downtrend with a…

I’d like to expand upon Wednesday’s social media post. And share it via the blog and newsletter to ensure this gets to a wider audience. Because it’s an important concept. One I believe critical for your trading success. Part of good trading comes from quickly identifying and avoiding those price sequences which contain potential to…

A few months ago we examined the concept of traps occurring in the price action just before, or immediately after, the RTH Open (RTH = Regular Trading Hours). I'll place links to the prior articles at the bottom of this one, if you want to review them. Today, let's look at another example of…

I've long been a fan of Opening Range (OR) theory and the way that it allows us to quickly and easily identify a "bigger picture" session bias. So last week we played around with that concept and explored it's application in new areas of the chart. We took the concept of OR theory and…