Sometimes in conducting our analysis and formulating trade ideas, it’s important to notice what the market does not do.

The chart below is a 1-minute snapshot of the 6B (GBP FX Currency Futures, equivalent of GBP/USD for forex traders) from last night, Thursday 25 Mar 10.

The market was established in a downtrend with a clear larger-timeframe bearish bias. However the 30 min chart (not shown) has an area of major support at 1.4920-25, so this acts as a warning sign for a potential reversal. 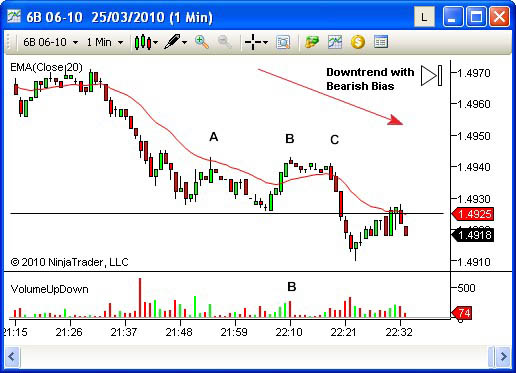 Looking at our 1-minute chart, we see that the downtrend took us within a couple of pips of  major support prior to pulling back to point A, which showed good rejection of higher prices via the upper tail. From A, price retested support on lower momentum offering a great trade opportunity up to B, although that’s not the subject of this article.

The rally up to B occurred with wider than average range candles closing on or near their highs, on increasing volume – clearly bullish. The question then is whether or not this upwards momentum will be sufficient to change the trend and our longer-term bias?

The candle marked B is the narrow-range red candle right at the top of the rally. Note that this also occurred on the highest volume of the rally. A high volume with very little resulting movement, in this case indicates that the buying pressure that led to the rally is now being met with approximately equal selling pressure. Of note is the fact that buyers were not able to push candle B above the high of candle A (previous point of increasing supply). Subsequent candles would be required to resolve this battle of the bulls vs. bears.

Would this be a temporary pause before the bulls reasserted their dominance of the market, pushing above point A and establishing a new trend?

Following point B price action moved sideways for 7 minutes on low volume, unable to continue to new highs, showing no desire from the bulls to pursue higher prices.

Seeing that the market doesn’t want to trade higher leads us to then look for a short opportunity if the pullback should fail. This occurs at C, with price falling on higher momentum, fueled by the orderflow of the previous longs either exiting their trades or being stopped out.

So, we’ve profited from ‘what the market doesn’t do’. In this case, the higher momentum move up to B shows that many were anticipating a reversal. When the market couldn’t reach those new highs, these traders are forced to exit their position as they realize that their ‘reversal’ was really just another pullback in the longer-term trend.

We've previously discussed the idea of fading breaks which occur against the market bias. Often they're a trap! If we can anticipate that trap then we can position ourselves for a successful trade by entering at or before the point of their failure. See here if you missed the prior articles on this concept:…

The following trade review examples have been taken (with permission) from some email conversations with Josh, a trader of the YTC Price Action Trader methodology. He's still in the early stages of his development, developing confidence in his strategy and processes through historical chart review. He's doing this using ForexTester software which allows for trading…

We’re all familiar with the charts produced by news events that cause a sudden and massive expansion in volatility, as shown below in this example from my blog archives. (If you’re interested in the blog post associated with this chart, and an examination of the retest of support, you’ll find it in the free YTC…

My preference for triggering entry is via a lower timeframe pattern breakout, such as shown in many examples throughout the YTC blog archives. For examples you might want to refer to the free ebook, “The LOST Files – 150 Lost YTC Blog Posts” for the following posts: Chart Patterns at the Micro Level The Fractal…