Context is far MORE IMPORTANT than the trade entry trigger.

One of the dangers that newer traders face is too much obsession with Lower Timeframe or Trading Timeframe entry trigger patterns.

I've been there myself. We all seem to get stuck there. Entry trigger patterns are exciting. They're simple to see. And most importantly, they satisfy our "need" for certainty.

And so when I post a trade with a shooting star trigger entry, or a spike & ledge, or a spring or upthrust, I get people emailing me with a dozen examples of these same trigger entry patterns that they've just found on a chart.

But typically…. they're forgetting context.

What do I mean by context?

Context means the surrounding conditions or circumstances within which the trade is occurring.

There are many ways to look at context. My preference is to consider where the trade is occurring within the Higher Timeframe S/R framework and the Trading Timeframe trend structure, plus whether or not the "behaviour of price movement" matches my future-trend projection (See YTC Price Action Trader Vol 2 Chapter 3 for the Principles of Future-Trend Direction!).

There are other ways. Some traders gain a feel for context through market profile, or intermarket correlations, or… well there are many ways.

The point is simply that a trade does not occur in isolation from the surrounding market conditions. And those conditions are important.

Let's look at a trade:  (Note: I've purposely left off the timeframes as it doesn't matter. Just think in terms of Lower, Trading and Higher Timeframes) 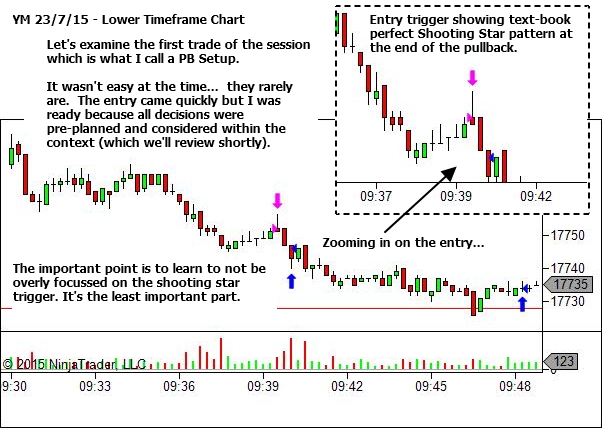 As you can see… it's a really nice Shooting Star pattern. But that's not the important part.

Let's look instead to see the conditions surrounding the trade. 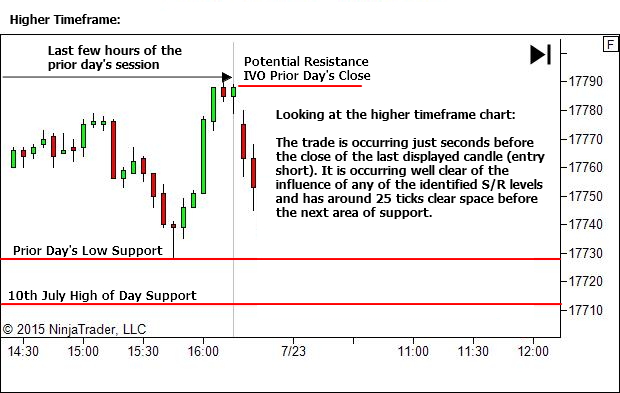 Always maintain awareness for where the trade is occurring within the Higher Timeframe S/R structure.

Is the market currently within the area of influence of a Higher Timeframe S/R level?

If so, then our Trading Timeframe trend and bias analysis MUST consider this fact. Is the nature of price movement suggesting a break of the level? Or is it more likely to hold? How will this influence other traders decision making? Where might they get trapped? What will price need to look like to indicate a trade opportunity?

And, if the market is well clear of S/R levels, then we simply maintain some awareness in the back of our mind for how far we have available to run till we do hit the next S/R level.

In the case of this trade, we're currently positioned (pre-entry) well above the next level of "prior day's low" support.

Let's look at the Trading Timeframe trend structure in the lead-up to the trade. 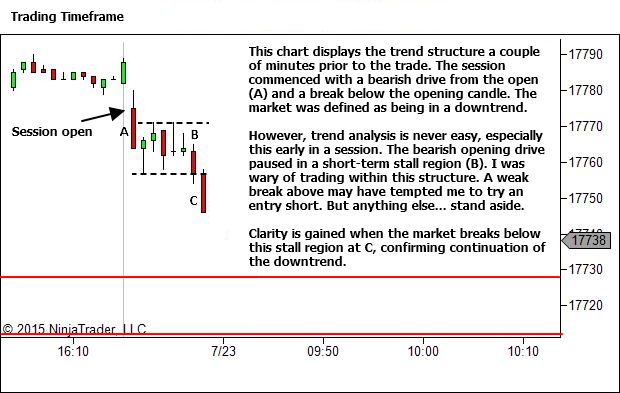 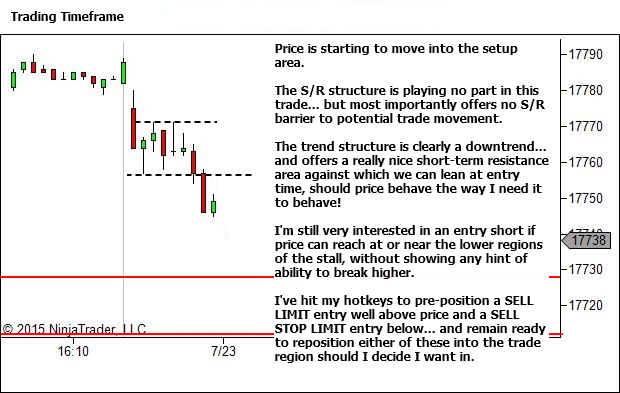 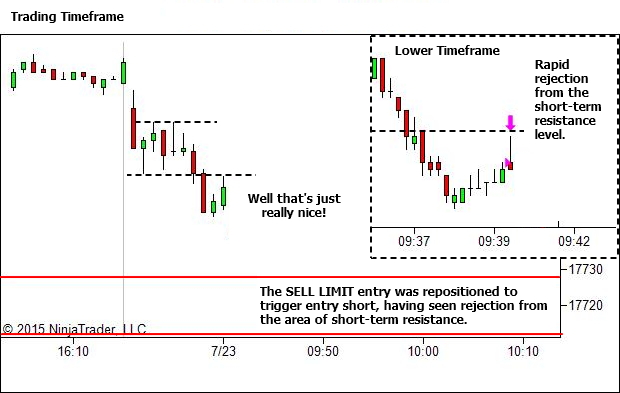 Don't look at my work or someone else's and see a Shooting Star pattern and think that this is the key to good trading.

And from a metagame perspective (not considered so far in this article)… Who on Earth would be BUYING late in a downtrend pullback right into an area of short-term resistance? I want to fade that guy!  🙂

Let's look at the outcome. 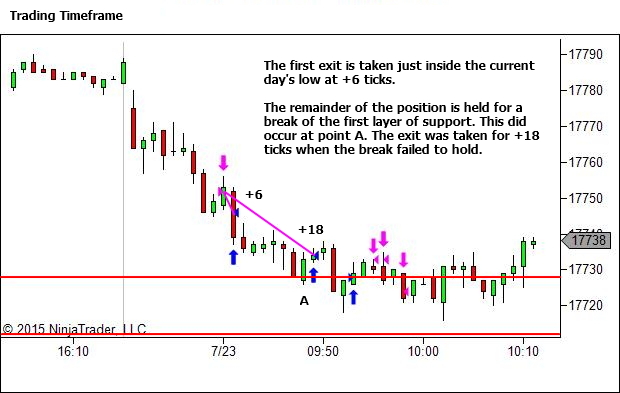 Don't get caught up in looking for pattern-based entry triggers. Much more important than this is the context within which they occur.

Learn to look for CONTEXT!

It's one of the keys to successful trading.

Here's an example of someone who's coming along quite nicely with their development as a trader. The following two images are from a YTC Price Action Trader reader who sent an email, asking the following: I'm not sure if this method of thinking can be used to go against my premise in the future? What…

Last week we looked at key components of the daily session review process (If you missed it, refer to last weeks article Part 1 and Part 2). This week we’ll look at another key aspect of your review process – but longer term – some of the key stats you should monitor to measure the…