I received an email recently from a reader, asking for a GBP/USD trade review and advice on how to follow the trend. His analysis concluded that the higher timeframe 4 hour chart was in a downtrend (based upon EMAs) so he then looked for a resistance area at which he would sell, expecting a resumption of the downtrend.

The email Q&A which followed offered some great learning points, so I’d like to share these points with all readers via this article.

The following chart shows the 4-hour chart at the close of the candle prior to entry. Please note, I’m not sure of the EMA’s he uses, but it’s largely irrelevant. This chart shows a standard EMA(20). I’ve also used the 6B instead of the GBP/USD (cause that’s what I trade), but it should be the same give or take 1-2 pips. 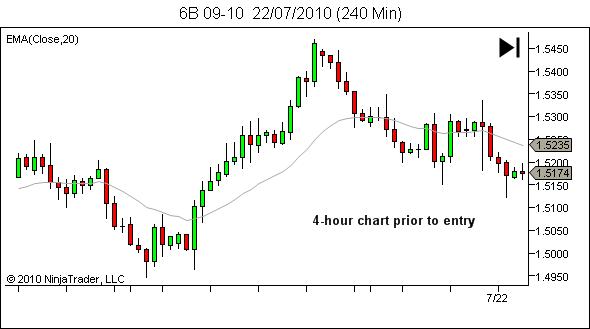 The next chart (below) shows his entry area. He identified resistance at 1.5213-23, based upon prior price action. He entered approximately at point E with a stop a little above the swing high. 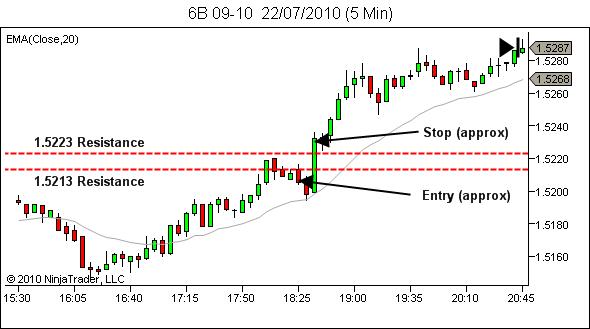 So, the premise was for his resistance area to reverse the 5 min uptrend, and commence a continuation of the 4 hr downtrend. Subsequent price action shows the trade stopping out.

Here’s an excerpt from my email reply…

As I offer some suggestion below, please remember that analysis conducted with the benefit of hindsight should always be considered suspect. There’s no way of knowing how I would have actually reacted at the time, had I been trading this sequence. So take from the following what you will.

There is one clear error here, but before I get to that let’s just talk a little about analysis.

First… there are many people who do attempt to trade through alignment of trend on multiple timeframes. And many of them get great results. So I don’t want to totally discount it as a possibility. However that’s not the way I see the markets working. Attempting to short the 5 min on a reversal back in the direction of the 4 hour trend, is not the right way to do this (in my opinion). Because which trends and timeframes do you select? There are different trends on every different timeframe? Which one is influencing current price action? It’s not practical to watch all timeframes – too much information.

A better way to do this (once again just in my opinion) is to trade the trend on your selected timeframe, in this case the 5 min, while using the higher timeframe to identify S/R barriers to that lower timeframe trend. I’d use something a little lower than 4hr (perhaps 60 min), but let’s use the 4 since that’s what you’ve been using.

The 4 hour chart provides barriers as displayed in the chart below. Note that I have not included the same resistance point you mentioned, which is simply the highs of the candle marked A. If every candle high or low was deemed to provide S/R, there would be lines all over the place. Unworkable in my opinion.

By the way, barriers are not an automatic short at resistance or long at support. Rather, they are considered more like ‘decision points’. Areas at which lower timeframe sentiment should be watched more closely in order to determine whether or not the future path will be a reversal or a breakout. 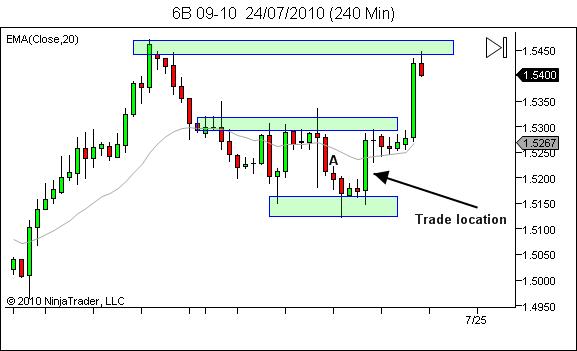 So, now I’m just looking primarily at the 5 min, as it trends within this framework.

We note though, that price is not near these higher timeframe barriers. The higher probability is therefore for the trend to continue in its current form, unless we see evidence of weakness within the trend. (ie. look first for trend continuation rather than reversal.)

Considering the context of price action, we see that it has just broken above the upper level of the Asian session range. These are usually good locations to find trade opportunity. 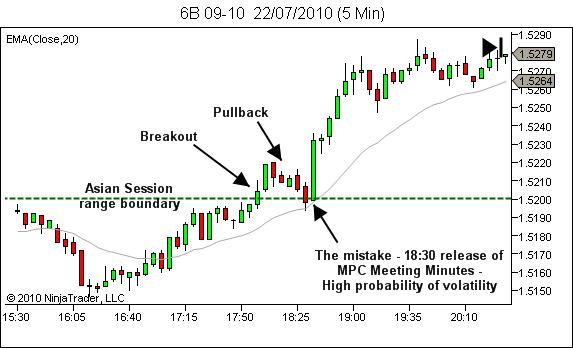 The sentiment needs to be watched closely to determine the most likely outcome – a breakout failure (reversal), or a breakout pullback (continuation). Essentially, you’re looking for strength or weakness.

In this case, the breakout (although not overly strong) is clearly stronger than the pullback. Five pullback candles are required to retrace the distance of the two breakout candles, providing us with a continuation opportunity (long on a failure of the test of the upper Asian Session range boundary).

As I said earlier though, hindsight is a wonderful thing. Quite possibly, in real-time, I may have been comfortable taking a short here. The breakout did stall quite quickly. Entry would be no later than the break below the 2nd red candle in the pullback (having shown two attempts to push higher which have both now failed).

However any short that was taken would be managed quite aggressively, being aware of the possibility of failure. (Remember, my preference is to look for a continuation rather than reversal). The lower tail on the break below the range boundary would raise some concern, and the trailing stop would have been moved above that red candle, possibly even for a reversal long. So, any short would have given a small loss, before reentering me long.

Ok. That’s something to think about regarding analysis.

Now to the real error… which would have ruled out ANY trade at this time in this location.

The green candle that stopped you out occurred at 18:30 (my time zone). This is the timing for release of the MPC Meeting Minutes. Significant volatility could be expected at this time. No trade should be entered just prior to this, unless you anticipated being out before the economic release.

You need to be aware of any upcoming economic news releases. The best way is to use the Forex Factory economic calendar, located at http://www.forexfactory.com/calendar.php.

Click on the time to adjust it to your time zone, and use the Filter at top right to display only the currencies that interest you.

Hope that helps a bit.

“Will you walk into my parlor?” said the spider to the fly;‘Tis the prettiest little parlor that ever you may spy.”… Mary Howitt Last week, we discussed a market model based upon the fact that the market is a mechanism that promotes self-deception. If you missed the article, read it first here: https://yourtradingcoach.com/trading-process-and-strategy/a-new-market-model-the-market-is-a-self-deception-mechanism-part-1-of-2/ The end result…