I posted the following on social media a few weeks ago… 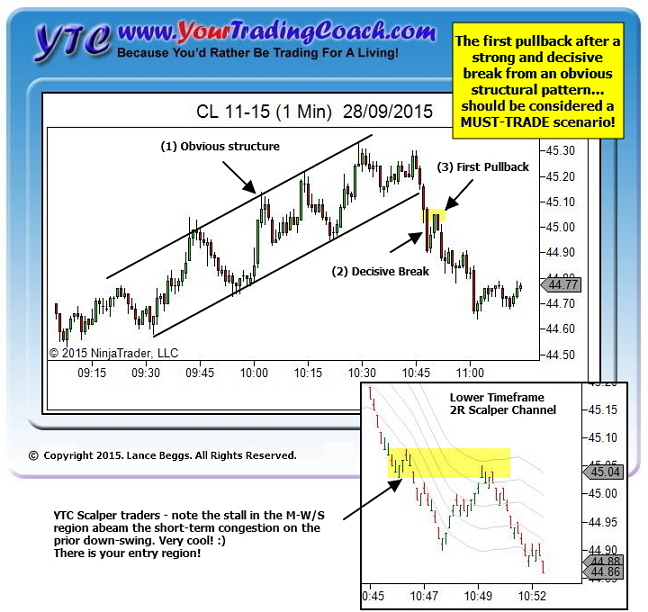 But this one… should definitely be in your trading arsenal.

Note the three points displayed in the social media post above. The key is ensuring you have these in place. 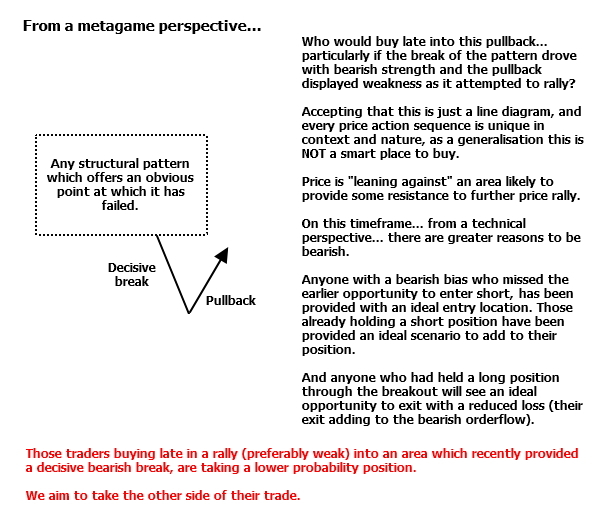 Let's look at this idea play out in a few other charts.

And why not mix it up a little as well… with a completely different market and timeframe.

All markets! All timeframes!

Yes, for different instruments there may be some adjustment required to allow for the different nature of price movement, in particular with trade entry and exit decisions.

But at a conceptual level, it's the same idea. A retest of the point of structural change is a good trade location.

Two important points before we continue with more examples:

1. Both examples so far have been channel breaks. This is not just a channel break concept. It can be ANY form of structure. The more obvious the better. You want other traders seeing it as well.

2. You'll note in both prior examples that the structural pattern is a quite large macro-level pattern (comprising a WHOLE LOT of candles). Again, this is not a requirement. The concept works just as well on smaller micro-level patterns.

I'll make sure the next two examples are NOT channel breaks… and play out on a much smaller time-scale.    🙂

First up, let's go back to Crude. Because I just LOVE the level that formed in the topping pattern in this example!

Interestingly, these are the type of levels which I absolutely love to see form a trap before continuing higher.

But when they do break, as in this occurrence, look to the retest on the lower timeframe chart to seek your entry short. 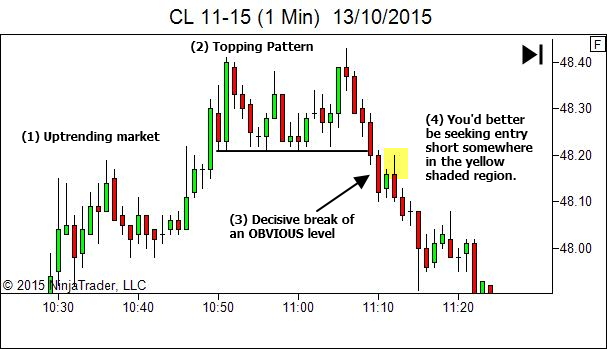 And finally one with a trade… in the Emini S&P! 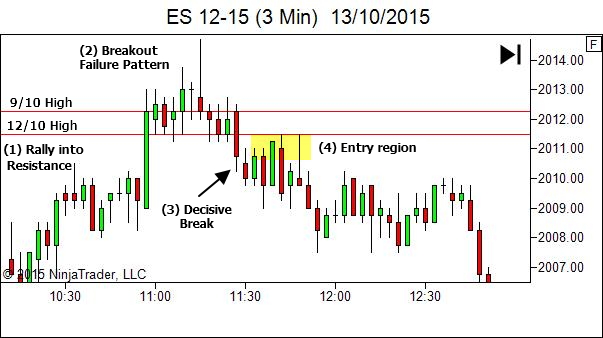 Some interesting observations in this example:

1. Note how the retest is not so quick in this case, giving a LOT of time to work your entry. This is a good example of the different nature of different markets, which we referred to briefly above. With ES often being slower and less directional, trade entry and management will be different to the style used in Crude Oil, for example.

2. Our definitions of a "decisive break" may well vary. Note in this example how it doesn't drive with as much strength or distance as perhaps occurs in a "textbook" example. But context is important. The break of the 9/10 and 12/10 session highs was significant. And price was unable to show any definitive bullish strength following that break. A failure of the breakout here is structurally important, and combined with the earlier bullish weakness above the S/R levels, was to me sufficiently important to be considered a "decisive break" of the higher structure.  (Side-note: If you're interested in seeing some further discussion of the price action above the S/R levels, have a look at both these social media posts from the 14th October and the 15th October).

Regardless… the concept remains the same.

Look for an obvious structural feature which breaks in a decisive manner, and seek trade opportunity on the retest.

And here's the outcome… zooming into the 1 minute chart to see the finer detail. 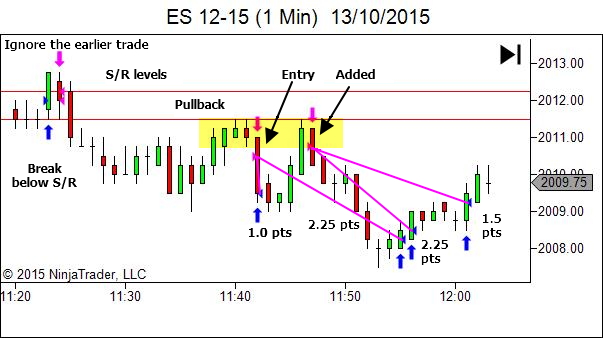 I'm clearly not retiring off that trade, but it's all the market offered.

No matter your market or timeframe, search your historical data for examples like this. Study them. Why? Because these price action patterns are not just obvious in hindsight. They should be clearly visible in real-time as they occur.

And importantly… be sure to include examples where a retest of a point of structural change FAILED. Was there some way to see this as a lower probability trade and avoid it entirely. Or if not, were there clues post-entry which should have suggested scaling out or scratching entirely to minimise risk.

A "pattern" like this, when considered in context, can provide you with almost infinite variation from one example to another.

STUDY THEM. FILE THEM. REVIEW THEM. OFTEN.

The key learning point from candlestick patterns is that (assuming you’ve been taught correctly) it teaches you to read the sentiment within the pattern; how the battle between the bulls and the bears is playing out and which is the dominant force. This concept is then applied to a dozen or so patterns. And provided…

I love these patterns so much. Let’s do it one more time. I know… we’ve done this a couple of times already – see here – and here. And of course, those with the YTC Price Action Trader should look to Volume 2, Chapter 3, Page 143, for the same idea expressed on the Trading…