I produced a few articles on general S/R theory a couple of years ago.

And a recent blog post which demonstrates how I define my S/R levels on my higher timeframe: “Plotting S/R – Here Are My Levels From Today’s Market!”. (NB. You’ll find this blog post in the YTC Newsletter signup bonus ebook, “The LOST Files – 150 Lost YTC Blog Posts”)

At the very least, please read the recent blog post prior to this article.

Now, in writing all of the above, one thing I don’t appear to have ever discussed is when I will invalidate a level and remove it from my chart.

The S/R marked on my charts are defined as follows:

For those that have been broken, it’s a lot more subjective. We have to ask whether or not it’s a level still fresh in trader’s minds. Are traders likely to still be trapped from the break of that level? Or was it recent enough for them to recall the pain of the break of that level? Remember, price action is a result of orderflow, and orderflow comes from trader decision making. If a level still recalls emotional pain, then it will influence orderflow again. If it’s forgotten, then it will have no influence.

If a level occurred 18 months ago (to use an extreme example) it will have no influence at all now. But if an area of support was broken only half an hour ago and is now being tested again for the first time… it’s still valid.

So, without being able to give a hard and fast rule, as a generalisation we expect recent levels to be more relevant, and especially so when they’re involved with an emotional incident such as breaking of the level. A good example of this is the common occurrence of support becoming resistance, and resistance becoming support.

So, those are my valid levels:

Therefore, to invalidate a level, it has to have been:

Sorry I can’t provide more hard and fast rules. It’s a subjective thing… as is so much of chart analysis.

Let’s look at an example though, which I’ve lifted out of the YTC Price Action Trader (which discusses S/R in much more detail, by the way). 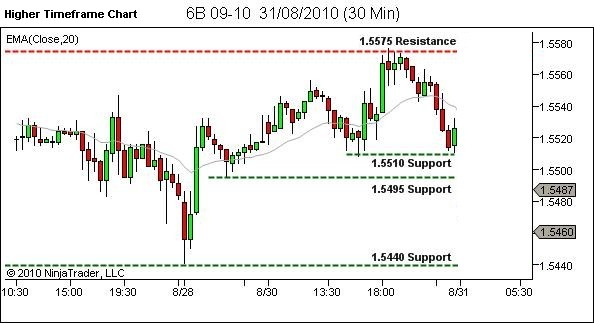 Now, let’s say price moves lower, as shown below, slicing right through the 1.5495 level without any pause at all. 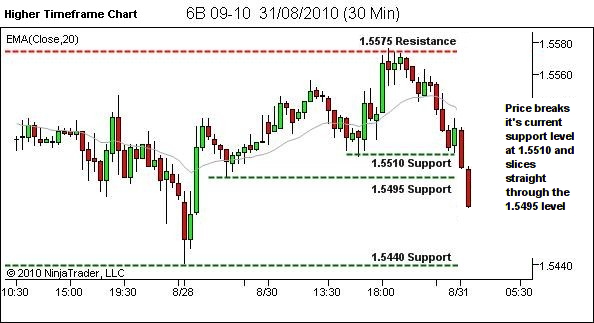 Which levels are still valid?

The unbroken levels are simple. 1.5575 resistance and 1.5440 support are still untested, and remain on our chart. However 1.5510 and 1.5495 have been broken. Are they still valid or not? Are they still significant in other traders minds? 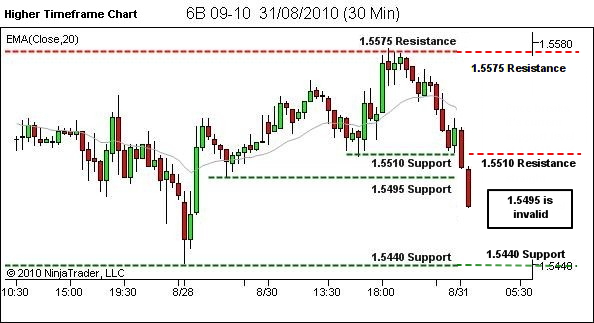 Because price showed a stall at the 1.5510 level before crashing lower. People bought here. Some will have lost money; others will still be holding on in desperate hope of a breakeven exit. The level is recent and is a source of emotional pain. It stays on my chart.

1.5495 provided almost no support as price slid straight through. There was likely to have been little buying here, and therefore a lot less emotional pain. This one’s gone!

So, hopefully that helps you with your S/R levels.

Let’s wrap it up with a summary:

These are my valid levels:

To invalidate a level, it has to have been:

I'm displaying charts without any trade markers here, so that you can focus on the price action without any distraction. Because there is a very important fact that not everyone gets. And rarely is it displayed in such a simple and obvious manner, as it is with the two charts we'll discuss today. That…