"Never let an aircraft take you somewhere your brain didn’t get to five minutes earlier."

It’s essential as a pilot to stay ahead of the aircraft. This means projecting your awareness ahead of your current location. Anticipating what is coming, considering what that means and determining appropriate actions while there’s still time to do so.

Ideally you want no surprises.

In the Black Hawk, when we had a high intensity mission that felt like constant crisis management and last minute decision making, we’d refer to our performance as ‘hanging onto the stab’; the stabilator being the tail end of the chopper. In other words, we struggled to keep up.

Stay ahead of the price action.

In conducting your analysis, think several candles ahead.

Let’s look at a chart.

As I write this, the UK session is just commencing (2 mins ago), with the following chart… 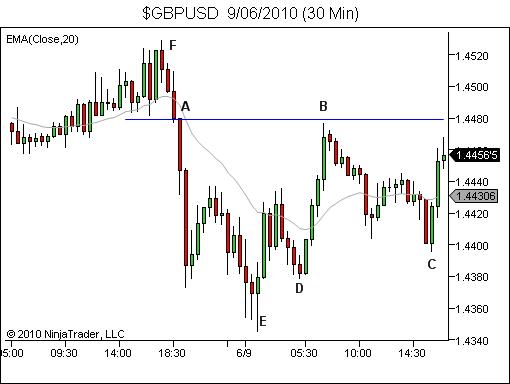 Yesterday’s UK session breakout point at A was tested at the end of yesterday’s US close at B. Where we are now is that price has clearly rallied during the Asian session, to once again test this AB level.

My longer term bias is bearish; nothing surprising there given the six months of downtrending action. However on an intraday basis I’m a little more range-bound at the moment. My initial plan is to look for price to retest our area of AB resistance. This is a critical point for me, in setting up either a bullish or bearish bias.

Ideally I’ll be looking for a further rejection of that area, via lower timeframe signals as follows:

Who knows if it’ll be right? It doesn’t really matter. Either way, any opportunity will be appropriately managed in order to limit risk and to maximise potential profits.

Plus the expectation for future price action and opportunity will be constantly updated, bar by bar, as price action unfolds on the RHS of the chart.

What is important though is that my awareness is remaining ahead of the price with a clear plan of action regardless of what eventuates. I’m not predicting. I’m reacting to what price does in a planned and controlled manner.

Stay ahead of the price action.

A great email question from Mike: I know you don’t trade stocks but I’ve always read that you leave gaps alone due to reversals. But take LOCM today; what’s the buy point? I’m thinking $4.30 or is this to soon, or would $4.50 be the safer buy. I found it at $4.30 but stayed away…

I'm always VERY interested in these places on the chart – the places where price can't go. The places where it tries… it pushes… but it just can't go there. This is opportunity. Let's start with the Higher Timeframe chart… Let's switch now to the trading timeframe…  Reference… this is a BOF Setup as described…

EMAIL QUESTION: Do you ever use a limit order to trigger into a trade? I've been trying to use limit orders when the market is in a trading range, selling at the top, buying at the bottom. If this is a fools game could you please set me straight with an explanation of why this…

The following is a great question from YTC reader Aaron. I thought this would be worthy of entry into the blog and newsletter as it's a question which will be relevant to anyone who allows discretion in their trade management plan. And I'm really keen for anyone else to add their ideas and thoughts…